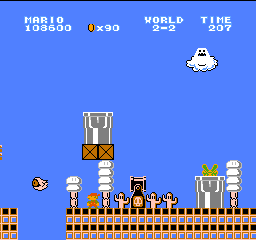 Super Chinese World 3 is the final Super Famicom game in the series, and introduces two different modes to enjoy the story. Action RPG mode follows the gameplay mechanics of the previous game, where combat plays out in real time, and the player’s reflexes and fighting skills will determine their success. Turn-based RPG mode follows the formula of a stereotypical JRPG, providing a tactical system to playing the game that isn’t reliant on timing or reflexes.

Depending on the mode you choose, you’ll encounter different characters, elements of the plot will play out differently, and even the endings will change. The game encourages replay by awarding you a password at the end that allows you to play the opposite mode, and the story will change slightly with each successive playthrough.

The evil Gingara Maoh plans to conquer the universe with the power of the Super Dimension Beast, Dimetron. Jack and Ryu, the heroes of Chinese Land, will have to fight alongside new allies to protect their world and all of the other parallel dimension worlds.