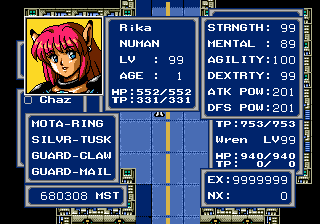 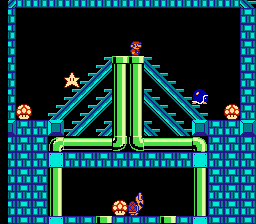 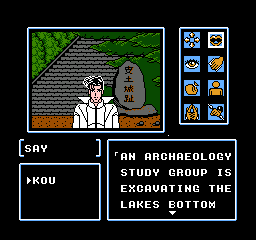 Excalibur 2: Get Even with Dragon

This 1987 minigame is a rudimentary RPG, and ambitious by Family BASIC standards, which only allowed for small amounts of code.

You have defeated the evil dragon, taken the town and driven demons from the country. You saved your lover. But that dragon has returned and caught your fiancee. You set off again. You must walk around the country typing commands. You have to defeat the monsters and level up.

Find three hidden holy swords. Find the Dragon Castle. Get gold, talk to certain monsters and get to the bottom of things. Defeat the dragon and save your lover.

This is a preservation of a game by Norio Kitajima published on pages 85-86 of Micom BASIC (マイコン BASIC) 03/1987. It requires the Family BASIC Keyboard or a similar emulated setup. This was an 1985 add-on for the NES/Famicom available in Japan only, which allowed for programming in the BASIC language. Hobbyists created original minigames within limited RAM space. Some were published in magazines, which provides our source code. Further ROMHacking has been done in this presentation.

The original used the generic Family BASIC graphics, including Mario and the Donkey Kong/Mario Bros enemies. The characters have been replaced with more appropriate art, similar to games like Dragon Warrior. This could be undone easily if you’re a purist. A large dragon graphic has also been added.

The original had some Japanese text which has been translated roughly to English here. Other small changes have been made to improve the game experience.