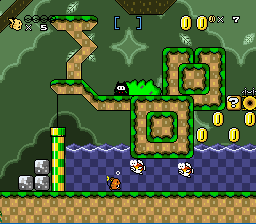 Like the previous title, this sequel puts the player in control of Protoman from the classic series.

1.All of X’s graphic tiles have been changed with sprites of Protoman

3.Protoman has his own weapon get sprite

4.Protoman has his own 1up sprite

5.Protoman has his own menu icon

6.Protoman has his own life bar icon

13.Level 1 charge is changed into a level 2 charge shot

14.Level 2 charge is changed into a level 3 charge shot

Another known bug with the arm upgrade takes place while silding down a wall. If unfully charged shots are fired while sliding down a wall, the first and second shots will be level 2 and 3.

It’s nothing major but after getting the helmet upgrade, the top of Protoman’s helmet will shift a little while moving. This is due to the way that the top part of the upgraded helmet graphics are set up. It’s also noticeable when he does his victory pose.

To patch this, a copy of this file is required: Mega Man X 2 (U) [!].smc, and Lunar IPS or any other program, but the program that would be most recommend is flips to patch this with.

And make sure it’s unheadered.