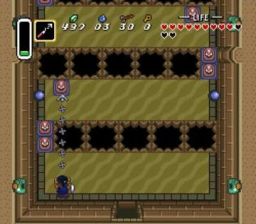 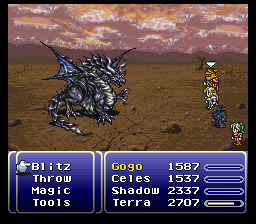 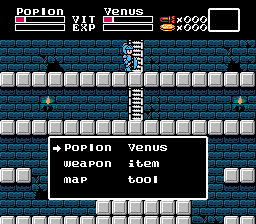 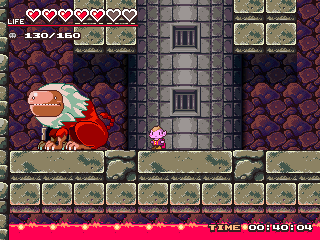 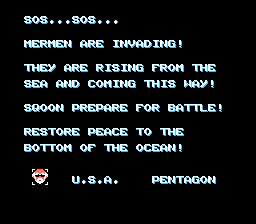 Circa 2006, Square Enix decided to cash in their chips with a portable conversion of their 1994 release, Final Fantasy VI. It was a concurrent release with their GBA port of Final Fantasy V, and both ports are known for being hamfisted affairs. A little bird told me that SE was in need of some quick cash, and frankly, from the state of this port, it isn’t that hard to deduce.

The first thing you’ll notice is that the palette has been brightened up for the GBA screen. That’s nothing huge; it had to be done to make the finer details of the game visible. I’ll grant that.

There are wrong notes. There are badly-synthesized replacements of the original soundtrack. Do yourself a favor; apply Bregalad’s Sound Restoration patch; it is quite lovely. It doesn’t, however, fix everything. The timing of the music has some glitches; it’s hard to describe, really. There are places in the game where the music is supposed to fade out, but doesn’t. For anyone who really got into this game in the mid 90’s, it’s kind of a buzz kill.

The sound effects aren’t that great, either, chiefly because many of them just plain aren’t there. Specifically, quite a few of the weapon/attack sound effects were edited out and replaced, so you end up with two weapons or attacks that made a different sound in the SNES version making the same sound here. It’s like they didn’t care at all that many of the people playing this were those who had bought the 1994 release.

The biggest problem is the slowdown. As hard as that GBA cart tries, it just never quite gets up to where it needs to be for this game. You can tell that whoever was behind this port knew it, too, as the music has been re-synchronized in places, so that what you’re seeing doesn’t match up to the music in the same was as the SNES version did. Many of the magic effects are riddled with this slowdown as well, giving me the impression that somebody was breathing down the programmer’s necks. If you played the SNES version, you’ll be excited to hear the airship theme begin playing after the battle with the Cranes; your excitement will fade quickly when you feel how badly the airship handles.

You might say that these are minor things, and you’d probably be right. The game is there, it plays from start to finish without freaking out on you…but something of the original’s spirit is lost. The new translation (with all due respect to Mr. Slattery, who is awesome at what he does) can be extremely interesting at times, and at other times incredibly dry and lifeless.

There’s bonus content, but in order to get anywhere near it, you better be ready to grind, grind, grind those Tyrannosaurs into powder. You must be this bored to enter.