There could be a few ways of loading the appropriate time limit.  Perhaps when the game checks Mario's current state.  I'm sure there is a byte somewhere that controls if Mario is small, bunny, transparent, etc.  You could insert some code there to look up a table of times, and load the correct time into the timer based on the the value of Mario's current state.

I got it pretty much figured out. just need to figure out how long it should last. i want the item to be somewhat generous. but not too long. Thanks again for the cool idea.

Glad to help out!  It doesn't necessarily have to be that, but it would be good to utilize the timer in some fashion, rather than making it irrelevant.  Hopefully you figure something out!

Speaking of which, I now have it where the timer is frozen until getting the transparent Mario power-up, then it starts to decrease. Good sign. but now I need to figure out how to get it to load the appropriate time limit, and not kill mario once reaching zero. some decent progress. Thanks for the great idea

Looks great!  There is a technique in art that implies an edge or shape without actually drawing it.  (called implied lines) Our brain simply interprets how it should look, even if you can't see it.  Using black for Mario looks perfectly fine even against the black background.

Edit:  If you plan to reset the timer frequently, there really is no point to keeping it, right?  Perhaps you can create something else in its place or change purpose?  Just a thought...

Edit 2: Maybe use the timer to indicate the duration of your new abilities?  That could be interesting to give ability time limits a visual cue.

yeah I was going to remove the timer but I was having trouble removing the it completely for some reason. I honestly grew tired of messing with it. But that is a great idea with power up duration. I will look into that. thank you!
24

I really like your ideas for this hack!  Seems very fun.

Question, though, what do you plan to do with the timer?  You say we explore the first 3 levels trying to find the entrance to the castle, and a timer seems like it'd be bad for the exploration / open world you are going for.  So it made me curious what you plan for that.

Also, just a small critique, Mario's palette seems too bright in Bunny mode.  The design of the ears is great, though!  Nice job on that.

Good luck on your project, and as you learn ASM!  Looking forward to what you do next.

Thank you! I appreciate the compliments and feedback. I plan on making the timer restart every time you go in a pipe and come out of pipe. Also the timer will not start at 400. maybe 600. should be plenty of time. I honestly don't think will ever be an issue. As far as the colors of  mario are concerned, I actually feel the same way. I think instead of the light grey I will go with black. I have tested that and even though he blends in during the night stages, it still looks good. I will do more on his colors later. maybe post screenshots of different colors see what others think. 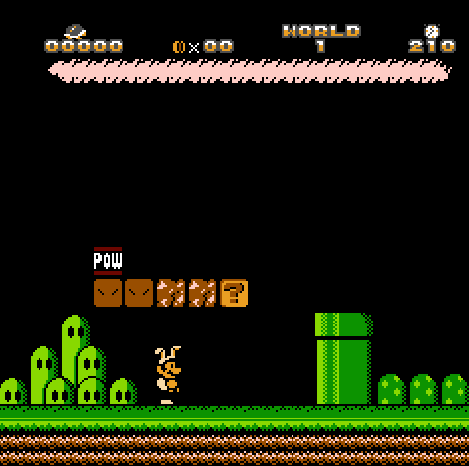 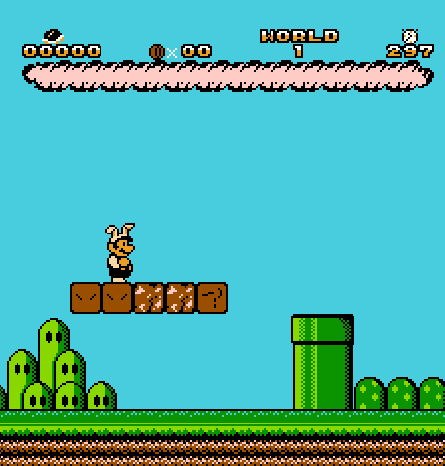 I think the black Mario looks much better.

Some good ideas for Martriodvania-style levels with the power ups there.. sounds fun

thank you. I absolutely love Mario Unlimited and the Deluxe version of course. been playing unlimited for years. even got in on real hardware

your work has definitely been a inspiration. 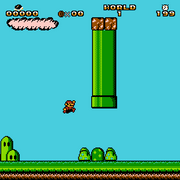 I like this, it's kewl, hope to see more progress in the future.

thanks. i been playing your hacks on real hardware for years. good to hear from you. thought it was time to make my own. anyway, i just have a few things to figure out then i can build the levels and finish the graphics. Probably have more screenshots later if i get time to work on it some more
29

This sounds like a cool hack.
My only criticism is that needing the fire flower to climb is just weird.
Was that a design choice or it a result of some technical limitation?

thank you. No, I did this because it is an exploration style Mario. the fire flower gives the ability to climb and advance further in the game. I just wanted some items to unlock certain abilities. like transparent Mario item allows Mario to pass through certain walls for example. the fire flower will not be called fire flower anyway.
30

The new bunny powerup is awesome! Keep up the good work! 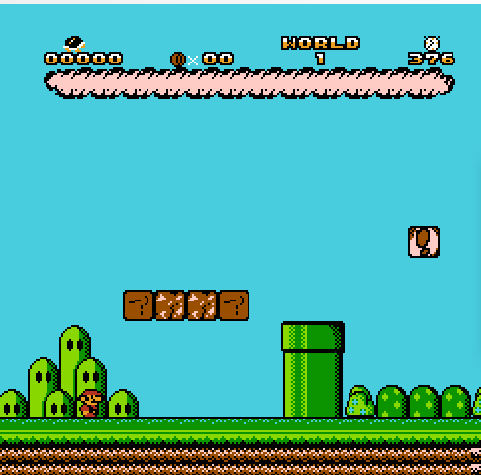 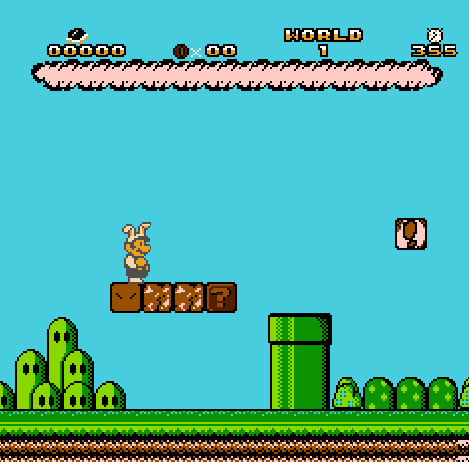 New Powerups:
Getting 100 coins give a regular star that lasts a bit longer than the original game. May add other affects. You can jump off of enemies if holding down the A button like SMB 3.The game will be open world with no flagpoles. you explore the three levels to find your way to the fourth level (castle). then move on to the next world. Custom graphics. Many ASM Edits. Score has been replaced with a enemy kill counter. new instant kill munchers. Instant kill "firewall" that kills Mario unless he has the transparent powerup.

This hack was made as an attempt to use ASM for the first time. This hack so far was created without expanding to use a different mapper. thought that will change because the STE title screen editor no longer works correctly for my game. Game needs a title screen. Will also need to add the music. I have some good ideas for the music but I tried to hack music many times and I always fail. I will figure it out somehow. Also need to figure out how to add upside down pipes. Now I am trying to figure out why the animation seems to be skipping a frame or repeating a frame. It as a animation patch that works with a unmodified ROM. I just started learning ASM so expanding the rom and adding things like upside down pipes and swappable chr banks and a new title screen is above my paygrade but it has to be done. Will give updates and more screenshots when I get more things done.

« on: November 04, 2020, 08:29:19 pm »
Hello all. Trying to learn asm for nes. Specifically for SMB. Having troubles understanding it all and such. but having fun none-the-less. I have experience in  graphical hacking and simple hex editing with SMB. want to up my game and create something better.
33

ROM Hacking Discussion / Re: How do I make tiles animated in Super Mario Bros. (NES)?

« on: October 28, 2020, 01:36:56 pm »
One way is looking into expanding the rom and learning assembly to add the necessary animation your looking for. SMB is notoriously slim on space. There is a patch for the animation but I do not have it. I had it years ago but lost it. But by expanding the rom or using the patch it will most likely make your game useless in most SMB utilities. About using someone else work, not sure how others would feel about that. If you dont know assembly I would take the time to learn.
Over time you will be much happier with your work.
Pages: 1 [2]