Cool stuff. Are you planning to translate the game as well, or is it mainly the title screen? Just curious is all. Either way, nicely done.

At first I just wanted to sharpen my image editing skills, but I recently decided to attempt a full translation of it, yes. Progress has been slow, but a programmer friend cracked the last PAK file (the one where the game's text is stored) for me yesterday, so... stay tuned.

Not too bad. Compared with the original, the title is a little lacking in character. "POM" looks okay, but "Community" is kind of bland.

Yeah, point taken. I guess I was trying to make it look as close as possible to the English logo on the loading screen, but it came out looking a bit sterile as a result.... 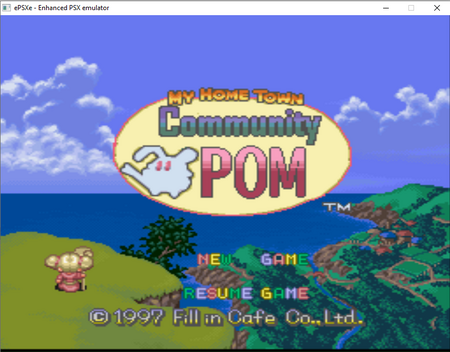 The originals, for comparison

« on: April 12, 2020, 11:06:10 pm »
Thank you so much for that detailed write-up, as well as the decompression tool! I'll mess around with it later tonight, see if editing the opening credits is within my capabilities.

(Also, changed the topic to better reflect where the conversation ended up

The pack format could have checksums/CRCs to validate data. Have you modified any other files within said pack file with success?

I have not, no. Only the loading screen was able to be modified, which coincidentally is the game's sole isolated TIM...
6

Just got through editing a bunch of MultiCLUT TIMs in Harmful Park. Not only do they display perfectly in emulation, but on legit hardware as well.

Went back to edit the Community Pom title graphic from scratch. This time, I sort of hollowed out the hiragana, didn't erase or alter it in any other way. The game loads up as if I hadn't changed anything; doesn't register the edit at all. Then, when I re-did the english edit seen in my last post, same as before. No music, restart before the image can load.

Is it safe to assume there's some process going on here that tells the game "no, that's wrong" if you mess with the hiragana characters? Or perhaps the PCK format is to blame?
7

The issue might be that you are reinserting the TIM in the disc image directly. This should always be avoided. Always extract the game's main files first and then work on them. Finally, reinsert the game files in the bin image.

Heeding your advice, I popped open the BIN image in CDmage, extracted the PCK file which contains my needed TIMs, then edited them using my usual methods. This time, it kept the CLUT info, but.... it still resets when the title graphic is supposed to load, music still doesn't play. Doesn't matter whether I reinsert them via TimViewer or Tim2View, same results. Even more baffling, I tested it on actual hardware to see if it made a difference, it wouldn't register any of the edits, even the 'Now Loading' screen. Just displayed all the original Japanese files.

Is there something I can do via hex editing, perhaps? That might be within my powers, if I knew what exactly I was looking for...
8

The way I've been doing it is, I convert the TIM files into BMPs with TimViewer, edit the BMPs in Usenti, convert back to TIM, then replace the original TIM file within the BIN image using Tim2View. I was successfully able to insert my edited 'Now loading' screen into the game using this method, no problems. However, inserting my edited title screen graphic would cause the game to reset right before it's supposed to display (also caused the music not to play during the intro, for some reason...)

It would appear the culprit is the multiple CLUT files stored inside the title graphic. CLUT #1 is the image itself, CLUTs #2-16 just look like a black screen. Here's the original graphic next to my English edit, to prove they're identical in every other regard. 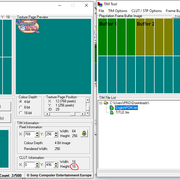 To the best of my knowledge, there are no programs that can edit the TIM image directly, and no way to convert the TIM to any other format that won't strip it of all additional CLUTs. I did track down a program to merge TIM files together, but no matter what I did, it would only bring the number of CLUTs up to 2. Any possible solution to this conundrum?
Pages: [1]