Also, it seems there is an L missing from the word "Skill."

Oh and um... if it is possible to do, I think it would be plenty fine to abbreviate some of the
stuff in the status window, like "Const." - "Intel." I mean, they already did Magic Def.
I just think that having stuff shoved up against each other like that is a tad icky.

I was very disapointed when I figured out Santa also appears in the original japanese game. I was hoping it was bullshit added by Nintendo of america to americanize the game, but alas no. This almost ruined the game for me.

Oddly enough, the Japanese do like to adopt and celebrate western holidays...

« on: January 05, 2013, 10:22:50 am »
Too bad they decided to make it some crazy hybrid thing though, then I might have been able to plug it into my wireless Mayflash CC to USB adapter and used that instead of my old flatties with their frighteningly weak zL and zR buttons (got save state and load state mapped to those buttons in Joy2Key and I'm always paranoid of using so much force I'll break 'em. Srsly Ninty, Y U NO USE RUBBER CONTACTS?) From what I've gathered it doesn't even work as a Wii U Pro controller, it's more or less another fused Wii-Mote and Classic Controller combo like the Datel "Retro Controller." 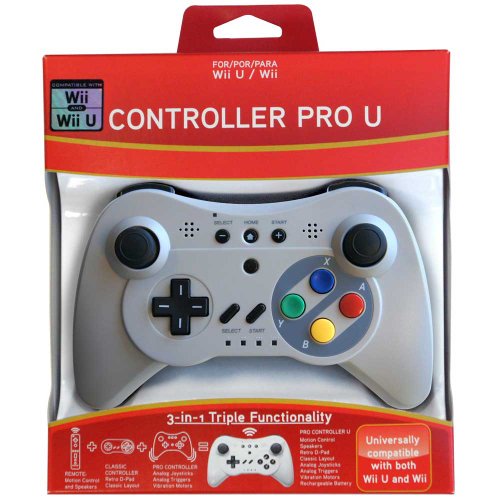 Personally I'd rather have seen them make something like this, lol....
http://s8.postimage.org/mt67y57k5/Interworks_Classic_Flat.png
(shields at maximum, photon torpedoes armed and ready)

It certainly would have been cheaper to make on account of no speakers, no gyrometer,
no infrared sensor and less plastic. And call me stone-age, but I still like flat gamepads.
85

Gaming Discussion / Re: So, shmups... A dying genre?

« on: December 23, 2012, 07:10:47 pm »
I miss the website "ShootTheCore," that place had some pretty interesting stuff...
Ones that really stuck out for me were Sorceria Angel, a game that reminded me
a lot of 'Brave Blade' with the added mechanic of knocking back specific colored
shots with a specific colored melee weapon and Trapezohedron of Darkness,
a short game with a really nifty mechanic of using the stick and a button to
make laser circles of varying size, depending on the radius of your move.

« on: November 30, 2012, 11:14:32 am »
I apologize in advance if this is the wrong place to be posting this, but seeing as how quite a while back I had posted a similar request (for the Dash button in the SNES version of Mega Man & Bass to be set to R instead of Double Tap or the stupid friggin' A button) and didn't get flamed for it (and someone was actually nice enough to fulfill that request), I figure I'm okay. Anyways, so I've been playing Castelvania: Harmony of Dissonance on the GBA, which for whatever ridiculous reason has L set up as a strictly Left Dash, and R set up as a strictly Right Dash. Now, my mind, having played games like LoZ: Minish Cap or Mega Man X (or the R button dash patch for Mega Man and Bass that some nice person made), or Castelvania: Circle of The Moon, is trained to treat R as the universal Dash button, but when Juste is facing Left and I press the R button, I just backpeddle... kind of annoying. And sure the developers probably "made it that way for a reason, like if you really needed to backpeddle away from an enemy" but turning -away- from the enemy and pressing R Dash is basically the same thing and far easier to remember and pull off under pressure.

So yeah, I am asking that some nice person out there in Romhackland create a patch to be applied to Harmony of Dissonance to make it so that pressing the R button will make you dash in whatever direction you're facing. I know the immediate response is going to be "do it yourself, you lazy git!" but I don't know how... : p
November 30, 2012, 11:47:56 am - (Auto Merged - Double Posts are not allowed before 7 days.)
Quote from: curses on January 10, 2012, 09:33:34 pm

Yeah, sorry, yeah, it was pretty lame anyway. I was saying that a game in which
Mega Man can shoot up is not even Mega Man-esque any more, so anything goes.

I won't bother reading through to see if someone else said this but, yeaaaaah...
Bass / Forte in Mega Man and Bass / Rockman and Forte... Rapid shot up, down,
left right, diagonal, could dash (where Rock could only slide) and double jumped...
Also Treble / Gospel was so bad ass he made Rush look like K9 from Doctor Who.

"Give him a sword and shield"

MMX4 on PSX (much <3 for more meelee-ish Zero) and the Zero saga on GBA
(in MM Zero 2 he has that shield disc thing he can throw after charging it up).

People [like myself] love "cheap" characters...
Me at age 11: HOSHI--, THIS FOX THING FLIES
AND THIS OTHER GUY CLIMBS WALLS / GLIDES???
*never plays as Sonic again, if he can help it*
88

« on: August 24, 2012, 04:20:29 am »
This looks ridiculously awesome... so many crazy new abilities.
I wonder... any way to throw in a "Bullet Bill" power up? Like...
Mario would turn into a Bullet Bill for a short time and be able
to just zoom around killing stuff kinda like the "Missile"
ability from Kirby & The Amazing Mirror on the GBA.

Oh, and if moar elements from SMB2 could be brought in...
Every time I see those plants on the ground I always
think "Man, I wish I could actually pick those up."
That's probably asking a lot though.

Oh and what's this about a Mouser Suit?
Like... Mario turns into the Mouser sprite
from SMB2 and can throw Bob-Ombs?
Duuuuuuude... megusta so hard.

Also the Bunny Ears power up from Super Mario Land...
89

« on: February 25, 2012, 09:13:59 am »
I don't have the patience to look through the 23 pages of this thread to see if someone else has said the same thing, but I've always wondered why games like Chip n' Dale and Duck Tales don't have anyone hacking the crap out of them and adding crazy hard levels and new graphics and stuff like people do for the Marios, Mega Mans and everything else.

Also, been playing Threads of Fate and have been wondering why there is no "Custom" setting. I've been trained by the SNES to want Y (square) as my attack button and B (X) as my jump button, and I cannot get this kind of setting in ToF... 4 modes for the controller and in all of them Jump is still on A (circle), wtf.
90

Yeah, thank you. This hack rocks.
Now I only have to get a good joypad to enjoy it fully. Sidewinder sucks so hard...

Did you know that Die Hard was released for the Turbografx in Japan?

« on: October 05, 2010, 06:34:49 am »
Is the latest version of SMM already available for dl somewhere? I tried getting it from here:
http://info.sonicretro.org/Sonic_the_Hedgehog_Megamix

But it's still an old version, doesn't have that cool scrolling text at top and bottom
during the disclaimer or the loading screen that replaces the black nothingness.

Also, john approved of the idea.  You know that giant X on the select screen where if you try selecting it, it just goes DING obnoxiously?  Well we're going to change that to be the character select on the menu so you can choose who to play as right as the level starts, and you can still switch in game

Will you be able to play Zero at the very begining stage, or would that cause problems?
95

« on: September 02, 2010, 04:17:45 pm »
You say Zero will have the X4 "multi-slash" motions, can that really be done? Also, I think that it would be cool if Zero still had a charge for the beam sabre, and after releasing that charge the beam would jet out much much further than usual. Or maybe have it be like a throw attack like Death Scythe in Gundam Wing Endless Duel or Luke in Super Star Wars: Return of The Jedi

I was saying that I thought that making X change your weapon might work better. That is, instead of making it dedicated to firing your blaster you could make it change your primary weapon to the blaster. Press X again and you'd go back to using the Saber.

I'd like this much more, as that's just like it is in the Megaman Zero games for GBA.

My thumb rested over B and Y allowing for easy jumping and firing and the side of my index finger was used to press A for dash.

Ugh, like in Rockman & Forte, I always hated that you didn't get an options screen where you could change Forte's dash to R instead.... I tried positioning my fingers in the way you described, wow is that ever uncomfortable. Atleast with R as the Dash I can press that with my index finger while still having the tip of my thumb over Y and the butt of my thumb over B. Give it a shot, you'll like it especially for that wall jump at the end of X3 where you're trying to climb away from Sigma's floating green vector head. Easier to get momentum off walls and get past those little bits that overhang above your head keeping you from being able to get higher without some space between you and the wall.