@Trax, so the original Japanese release also tends to shift around the wording between Palace and Temple?
Just to make it confusing enough

No, it doesn't. In Japan they're always referred to as "shinden" which could be translated into English as something like holy sanctuary, shrine, or temple. Most localized Zelda games translate it as "temple." Trax was merely saying that in spite of this, he personally prefers the use of "palace." I, on the other hand, prefer the more accurate "temple."

On an unrelated note, if the title screen is going to be modified, I'd personally prefer it to look more like the original art from the FDS version's manual: 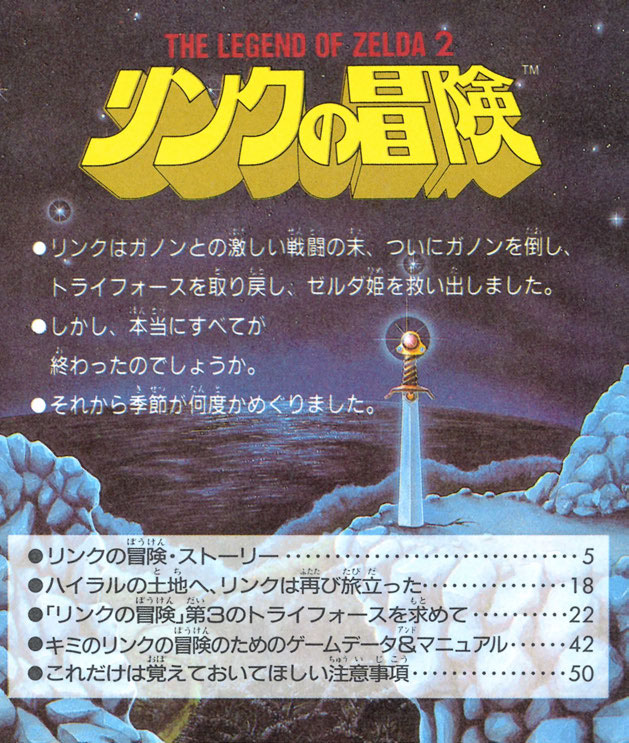 I think that sword looks a lot more fitting for a Zelda game than the rather gaudy sword that's on the US boxart.
62

Lady: "THE CHURCH IN TOWN HAS NO PRIEST, BUT THE BELL DOES TOLL..."

My take on the lady's text:

THE CHURCH
IN TOWN HAS
NO PRIEST,
AND YET THE
BELL TOLLS.
63

Now I just have some doubts about a few lines specifically, let me know what do you think of each rewrite:

I think the original text, roughly translated as, "The door won't open. It sure is quiet." is meant to invoke a creepy vibe, since a church who's bell still tolls despite being abandoned is definitely eerie. I think the current "awfully quiet" line fails to invoke a creepy vibe mostly because I can't help but think of Elmer Fudd from Looney Tunes.

It's hard for me to suggest a replacement line since I'm not familiar with the text restrictions you must work with.

« on: March 04, 2019, 10:51:02 am »
I feel like I must be in the minority, in that I was an RPG-obsessed teen in the '90s, so I cut my teeth on Ted Woolsey, who translated several of my favorite games from the era. Yet now when I revisit these games as a nearly forty-year-old adult, I far prefer a more accurate translation.
65

« on: March 03, 2019, 09:59:46 pm »
I played the latest version for a bit and noticed that the "temples" are occasionally referred to as "palaces" by NPCs. I'd suggest making it temple across the board to keep things consistent.
66

Updated versions of DQ 1 and 2 Delocalized are now live with the new spell names! For those familiar with the style of the Japanese names, I think you will see a lot of similarity. The majority of these are not words we just came up with but actual translations of the Japanese spell  names with the addition of suffixes that are generally in the same style. There are rare cases like Ionazun where the Japanese name was already based on an English word (Ion) and we left it as is. There are times we offer a little more meaning than the Japanese versions do. We thought this time around we should err on the side of more meaning versus less.

I think you handled the spell names perfectly. They're not all immediately obvious, but they provide enough of a context clue that the player should be able to quickly learn them through play (and an occasional reference to the manual)--just as the original Japanese players had to do. Excellent job.
67

"LET ME BE!  THE HOUSE MASTER IS IN A FOREST NORTH OF THE RIVER."

Perhaps "THE HOUSE'S MASTER" or "THIS HOUSE'S MASTER" would sound a little more natural, if there's room. But perhaps the slightly odd phrasing is fitting, since I believe it's a monster that says this line.
68

I am working right now on making the "ReadMe.txt" file that will go alongside Zelda II Redux, this is what I have so far.
If I'm missing anything (specially in contributions), please let me know to add it!

Perhaps alter the description of the sword on the title screen to specify that it now looks like the sword on the original US box art. When I read "original" box art I assume you're talking about the FDS release.
69

Nejimakipiyo and I have been working very hard recently on a major update to the first two games and all future releases where we are moving away from the pure Japanese spell names. Earlier on in the project, I was convinced that the Japanese names had no meaning whatsoever and that simply reproducing them in this hack would be the most authentic approach. Nejimakipiyo had noticed months ago that a minority of the names had components of words that conveyed meaning but it didn't seem like enough of them to rethink the approach to our project. Now after weeks of continuous research, especially through use of Japanese wiki sites, we have determined that a large majority of the Japanese spell names actually do have meaning or create sound or visual impressions to a Japanese native speaker. After thinking this through and listening to the feedback of a majority of people who have been turned off by our use of meaningless Japanese spell names, we have decided to create a new English system. This new system strives to utilize basewords that carry meaning but to use the same kinds of suffixes (or occaisionally prefixes) that are used in the Japanese names themselves. This is kind of like the contemporary Final Fantasy system but with variation of the suffixes between the spell families.

For Mera family, Blaze was a fine translation and we are happy to keep some connection to the original US namings when they are accurate.
For the Gira family, none of the prior English versions have conveyed the actual meaning of the Japanese base word Giragira which is a reaction to bright light. Flare seems ideal because it refers to a flash of light and also corresponds well to the burning effect of the spell.

Nice. I really like this approach. I'm curious to know what you're going to do with Hoimi, since that's a really iconic word in Japan and it already sounds a bit like Heal.
70

I've played the first three games in the series, but I've been holding off on playing DQIV until you give that your treatment. Thanks a lot for doing this.
71

Secret of Mana:
Relocalized
Can we talk about these changes? These ideas are the one's I really want opinions on.

I don't have a strong opinion on this, but I wouldn't change the spells to conform to the FF series, unless they originally did in Japan. I know the Mana series is a pseudo spin-off of the FF series, but I feel that anything that gives it it's own unique identity is a good thing.
72

« on: February 21, 2019, 05:50:43 pm »
I'm satisfied with this patch as it currently stands. The only suggestion I could think to add is perhaps revert the tektites to be killable without using the Fire spell, like they were in the FDS version. That would bring them more in line with tektites in all the other Zelda games. Besides, I imagine that making them only vulnerable to fire in the NES version was an attempt to make the Fire spell more useful, but this hack already addresses that by increasing that spell's speed and range.
73

Ha ha, chubby.  Having it side by side with the sprite from Zelda II certainly does make it seem that way.  Never crossed my mind before!

As for using it, not so sure that would be a good idea.  That'd be like using toon Link, from Wind Waker, in a more realistic game like Twilight Princess.  While that may be a bit of an exaggeration, seeing how these are a few pixels, the art style is just too different.  Anyway, that's just my thoughts on it.  Still, though, it would be quite amusing!

I agree with IcePenguin. While I'm not a big fan of Link's overworld sprite in Zelda II, using the Zelda 1 Link would feel too out of place. I tend to think of the Zelda 1 Link sprite as representing "child Link" while the Zelda II sprite is "adult Link."
Pages: 1 2 3 [4]