Personal Projects / Re: [Homebrew] INTO THE BLUE for the Game Boy

« on: July 22, 2018, 07:40:48 pm »
Very nice. Alas, my skills at such games have rotted to dust over the years, but you've definitely achieved the level of a professional product. Perhaps look into having a run of carts produced? I have no doubt that they would sell well, as Game Boy homebrew carts aren't terribly common, and people pay through the nose to buy Pokemon ROMhack carts.
42

« on: July 14, 2018, 04:44:41 am »
Possible reason for the odd original colors... They look fine if f.lux is warming your display colors at night. As it's a popular program, I wonder if it's the reason for the purple and green skies. When I open up PSP7, which I have set to disable f.lux to keep from wrecking the colors, the new colors look much better.
43

Newcomer's Board / Re: Final Fantasy 2 Soul of Rebirth for NES

It would be an appreciated project, to be sure, but I recommend starting small and working your way up. A chain of small victories can establish a bulwark against disappointment and failure.
44

Unless I'm willing to spend a few months studying how hex works, there isn't much I can really do.

About two weeks late, but hexadecimal is just 0 through 9, continuing with ABCDEF. 16 possible options for each "place" in a value. The number 57005, amusingly enough, is DEAD in hexadecimal. We would use hexadecimal to count, instead of decimal, if we had eight fingers on each hand. Don't leap headfirst into advanced stuff. Start with basic things to become familiar with it. People frequently set themselves up for failure by aiming for the moon the first time they pick up a bow. Nothing wrong with starting from elementary studies. The stronger your foundation, the more stable a structure you can place upon it. This works in architecture, martial arts, drawing, or any other skill more advanced than breathing.
45

will it work on a game in progress?

Since it only changes the text while adhering to the space limitations in the code, and changes none of the addressing, it won't goof off if you load a save file or save state from the original game. I just did about 40% of this while sleep deprived, so I was asking if people could find anything that had been broken that I might have missed. Thanks for testing.

Well, since I've gotten zero response from any community, I consider this a 1.0 release, and have submitted it for addition to the site. I could find nothing that necessitated changing without rearranging the entire ROM, so huzzah?
46

« on: July 10, 2018, 05:03:36 am »
I had come across a great many complaints about the grammar and spelling in Crystalis, and having read Webster's 9th Collegiate Dictionary about 30 years ago and doing nothing with the information acquired, I determined that I must do something useful with my free time. I've never done anything closer to a ROM hack than figuring out new Gameshark codes for Darkwing Duck for Game Boy, so while I don't think that I have broken anything, more eyes cannot hurt. I have played through about 60% of the game, on top of using save states to jump ahead to check NPC text, and so far, everything looks alright. No text jumping out of the boxes, no random sprites showing up in text. Lamentably, the original code is a bit messy, with lacking in the way of slack room, so there may yet be a few items that could stand fixing. Nevertheless, I believe I've cleaned up all of the misused instances of "it's", added commas where appropriate (and possible), reworded some particularly messy text, and fixed a slew of minor items. I would consider this version of the patch to be complete, but I would appreciate it if someone could give it a test run to spot any egregious errors on my part, or that I may have overlooked.

tl;dr: I think I un-████ed the writing in Crystalis to a satisfactory degree.

Before and After, in one egregious case of what the heckery. While a "that" would make the sentence better, it would not fit in the space allotted, due to the limited word table. 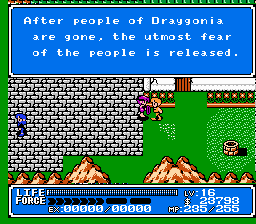 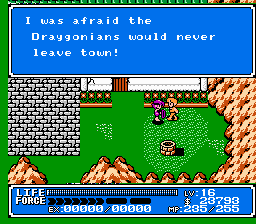