« on: December 27, 2018, 09:04:32 pm »
Because the grunts say that they fell asleep after they wake up from having fallen asleep. Also if you've ever had a day job, you would know that people will often report the end of their shift to let people know of the changeover.
2

« on: November 24, 2018, 12:25:17 am »
I have a borked-up save state right inside the room, and you can freely enter and exit to check on changes. Be advised that you should use an infinite health and ammo cheat, because the grunts respawn, and the electrified floor is right outside.
Cheat file and save state right here:
http://www.mediafire.com/file/p7vvdiebmbjgi18/Save_state_and_cheat_file_for_computer_room.rar/file
3

« on: November 23, 2018, 08:18:31 pm »
Oh, yeah, if it's using the locked palette for all of the "just gray" stuff, changing it could make a lot of things rather messy. All of the weapon pickups share the same palette as the enemy grunts, so without being able to reassign palettes properly... bleh. Well at this point, color isn't really an issue. Or maybe I'm just rambling. I'll take a peek at it to see if I can do anything.

Changing the colors to 18 and 0C looks kinda' ugly, despite them being closer to the MSX palette for the room. The problem with changing the colors normally is that the tiles with lights for the TX-55 are set to flash, so hunting down the code that defines these colors is what the trace is needed for. Bit of a migraine right now, making focusing difficult, but this information should help root out that last bit. What is not known at this point, is if changing the values for this room will have any effect on other tiles in the game. But that is a worry for another day.
4

« on: November 22, 2018, 07:31:57 pm »
Well, if the color palette for the room is changed to the tan/blue scheme of the MSX version, that could pretty well complete things as far as would be practical, barring significant ASM re-coding. I didn't want to use parts of anyone else's hacks in mine, due to the constant issues I have with this site already.
5

If hacks could only be a copy and paste, it would be a cinch ^^

Often, they can, provided the data in the ROM is laid out in the same manner. In the case of Blaster Master, it made a mess, as the layout code of the end screen in the US version is very different from the JP version, and I wasn't able to just brute-force copy a large chunk over. The ROMs are different sizes, as well.
6

Hi, this is a wonderful hack, many thanks

If this patch needs to be updated, please try to replace the big computer to destroy in the finla level by Metal Gear.

A patch is already existing for that, but unfortunately only for the Japanese version of the game

I'd like to, but it's beyond my ability. Maybe fifteen years ago, I would have devoted most of my free time toward learning 6502 Assembly, but now I can barely drag up the will to make a bowl of soup. If GEARTOOL was less cumbersome and arcane, I could change it visually, but that would still require programming to add the lasers and the pattern required for destroying Metal Gear, rather than just "drop 13 semtex bricks". Perhaps somebody could port over the changes from the JP version? I had ZERO luck even changing the end screen in the Blaster Master hack I did, so that's another thing I cannot do.
7

Newcomer's Board / Re: ¿How to replace a text in Hex editor with a longer one?

« on: September 30, 2018, 03:01:14 am »
If you want to lengthen text, in many case this requires a bit of code manipulation, provided there's enough empty space in the ROM, since it messes with the addressing of data. I had tons of fun dealing with Crystalis, and not breaking the game due to the extremely limited text space and dictionary issues.
8

ROM Hacking Discussion / Re: It's about the Nuts & Milk editor, with an old hack...

« on: September 14, 2018, 01:23:07 pm »
Well, you miiight, it may just look broken in the editor. Try messing with the first level, and see if it plays properly. From there, you will know if you can edit in scramblevision mode without breaking the game.
9

« on: September 10, 2018, 03:06:51 pm »
Maybe I'm completely misreading this, but if the issue is merely L-R mirroring in the sprite tiles, it doesn't seem that more effort beyond flipping tiles, or swapping "walking left tile 1" with "walking right tile 2, mirrored" is required. As in, copy tile from B to A, and in A, mirror the tile to match its orientation with the original tiles in A. Even my description is more complicated than the actual action.
10

Gaming Discussion / Re: Did becoming a hacker see you more able to see bugs, flaws and figure out games?

« on: September 08, 2018, 05:19:40 am »
I would say that it has opened another eye of the mind. I can now more easily spot hard-set errors that would previously have been ignored as "glitches". This kind of effect is exponentially greater when you learn most any technical understanding. Becoming an electronic engineer allowed me to become extremely irritated when I see 90º angles in PCB traces in art and fiction.
Spoiler:
90º angles in traces form inductors that generate magnetic fields that screw with voltage, even inducing voltage on adjacent traces.
11

« on: September 06, 2018, 02:36:54 pm »
It's in the approval queue as of last night. It's a shame that we never got a proper sequel to the game. Blasting Again isn't as much an abomination as "2" is, but I still don't recognize it. Ah well, can't expect much. Like Metroid, it was a game that the the production team didn't know was super popular in the west until years after the fact.

« on: September 05, 2018, 09:52:40 pm »
I've been expanding the maps where possible, as there is a lot of unused map space, and abandoned areas. Alas, replicating most of the maps from Blaster Master Zero aren't possible due to Blaster Master's compression system. I'm not changing absolutely everything in the game, because a lot in Zero is essentially the same as it is in the original. I don't have much else left to change, as I've just been changing things on a whim here and there. Come to think of it, I should probably submit it to the site tonight. Anything else I could change dramatically could be done as a separate hack, and as far as I can tell, all of the tile errors from the original game have been fixed.
13 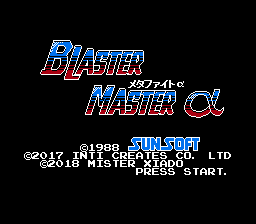 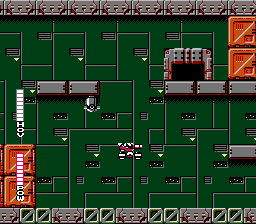 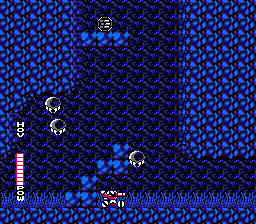 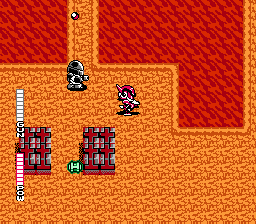 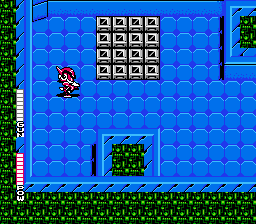 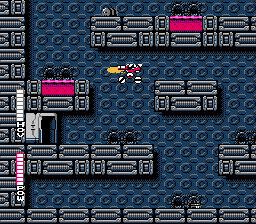 « on: August 25, 2018, 06:00:39 am »
I'm already well familiar with shoehorning fixed graphics into predefined real estate, but that is not acceptable in this case. The end screen is a coding issue more than anything else. The US version of the game puts T H E on a row abode a coded blank line, and then the block that displays END, then more coded blank lines down to the Engrish text. The Japanese end card has a 13x8 tile box for Kane and Jennifer's SD portraits, much larger than the space allotted to the END image in the US version, with two different palettes set. Below that, a coded blank line, then a smaller tile block for THE END. Haven't made any progress on even moving the rows that cannot have tiles manually placed in them. I brute-forced the title screen somehow, but my notes don't apply to the end card. Anyway, here's a little progress. The limitations in what can be changed are becoming burdensome.

Edit: A few updated images. More drastic changes will take some serious thought, as most of the tile tables have no unused tiles, making major changes to most areas' graphics will not be possible. For instance, to change a staggered brick pattern to a 2x2 square pattern, it takes two free tiles, as the original only used two, and would now need four. 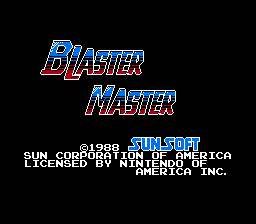 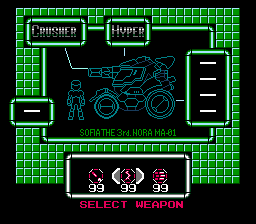 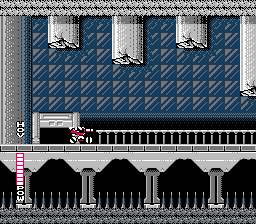 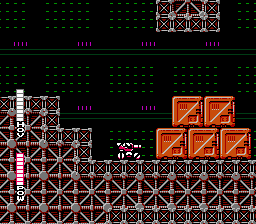 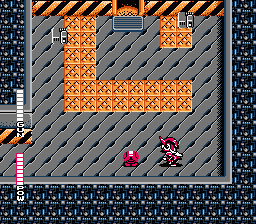 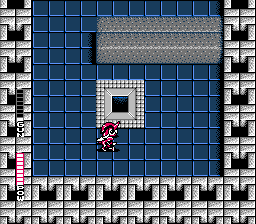 « on: August 21, 2018, 01:02:51 am »
You're welcome. Sorry this seems to be needlessly complicated, and I thought I would be able to pin it down, after changing the color that the flashing Blaster Master logo stops on. Well, I wish you the best on making new music. I can compose music about as well as I can see through stone.
17

« on: August 20, 2018, 12:04:37 pm »
I'll see what I can do. I've been digging through the ROM and changing every instance of 30 to another color value, but so far, nothing has changed the name entry request color. Changing the color in the PPU ram is simple enough, but not knowing where in the program that value is pushed into memory is a pain.

Edit: The game seems to push the palette in right as the screen is loading, and the color sequence isn't listed in the ROM, like you already found. It's at 0x003F07 in the PPU memory when the name entry comes up, but as I have zero history with ASM coding, it remains a mystery to me. Changing values outside of the palette block just starts making the game go nuts.
18

« on: August 19, 2018, 02:17:22 am »
Doable. It's just background tiles and sprites, but I don't have the information on how to deal with "tiles start at X position rather than Y position" and "here's two empty rows that you can't put tiles in, because reasons". Basically, I could change what appears in the opening, but not change its size or position. This means if there's a part of the screen with a solid color, I can't just cram art into it, as the game does not assign tiles to every individual spot on the screen. In fact, few games do. All of the documentation I've found just tells me what I figured out on my own, just like the "fun" I had with Metal Gear. Incrementally changing suspected values for control codes just turns into graphic garbage or crashes the game, so that's a dead end.

This is the progress on the first area of Area 2, but it also turns the next part completely blue. Four colors for a whole map. Lovely. 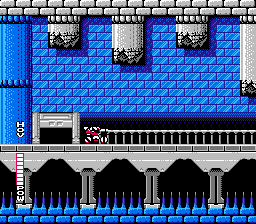 ...and aside from the title screen, this is one of the things I was trying to get some help on. Not that I ever will. 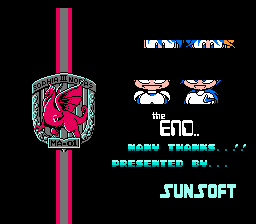 So I wanted to turn this... 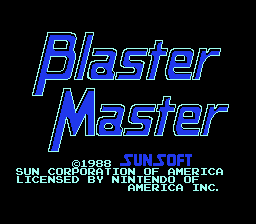 into something closer to this. 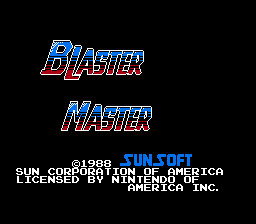 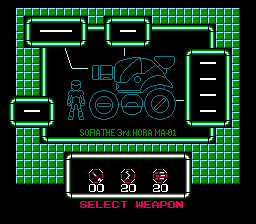 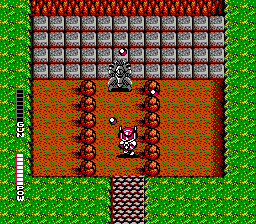 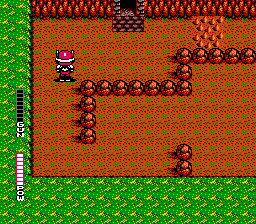 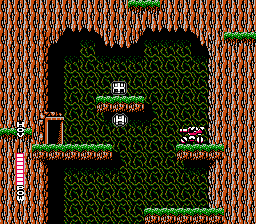 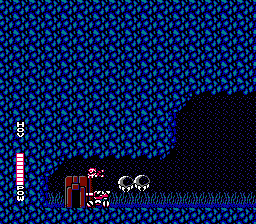 ...and a few odds and enemies here and there. Running into two roadblocks at the moment. Trying to rearrange the title screen, as offset wording looks imbalanced and wrong, and trying to fit the end card for Chou Wakusei Senki Metafight into the end of Blaster Master, buuut this is not a matter of copying and pasting from the JP ROM, of course. I'd like to get the hexagon from Zero onto the title screen, along with a sub title, but control codes setting the positioning and spacing of tiles on each screen are a mystery to me, and my forte is more firearms and "photoshop", not so much in the way of coding. I'm considering turning Area 2 from the castle structure that it has, into the ruined residential area that Blaster Master Zero exhibits, but I'd rather pretty a few fixed things up before I go and completely overhaul an entire area of the game. Any pointers on how to expand the usable area of static screens, or manipulate the existing free tiles? Research has been slow in the going. I'd rather not just edit Metafight if I can help it, even if I can just un-████ that leap of faith area in it.
20