« on: May 14, 2018, 10:22:35 am »
How I said in the text above, would be nice to change the title screen of Firepower 2000 (SNES) since the original one is so cryptic (if you have played the game you’ll know what I’m talking about). The solution would be to show a short text when the game title displays. The result could be like this image made with Paint by me. 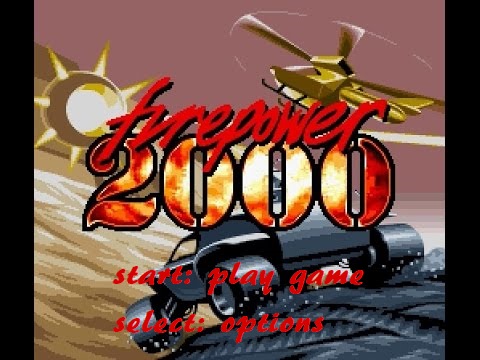 By the way, nobody has problems using the manual shield in The King of Dragons (SNES)? I’m the only one? How i said in the text above too, it's difficult to use because you need to stay totally still. Well, a possible improve for TKOD would be to be able to use the shield just like in “its brother” Knights of the Round (SNES), since in this game you can use the shield while you are walking.

- No bubbles graphic glitch but screen out of place and sound issues. I don't know if would be better to fix this one instead the US version.
63

Never had any trouble with it. How is it not responsive exactly?
edit: Just tried the game again.
- if you press the shield button, it starts a timer and goes to defense stance. When the timer runs out it goes back to normal stance. If you keep tapping the shield button it never leaves the defense stance. Could change this to a simple hold/release.
- if you try to walk it won't use the shield, no matter what. you need to stand still. This I would remove. The shield should have priority, to be more intuitive. But if you already know to stand still, I don't think that's a problem.

The shield sometimes doesn't work because you have to stay TOTALLY still. Sometimes you stop and press the shield button too fast and that's why it does not work properly.
65

I'm curious if you wrote this knowing of Mega Man 3 Improvement. Why wouldn't you take all the other fixes? There's even reduced slowdowns.

I just discover that hack you are talking about. Very good with a lot of cool improvement but unfortunately doesn't work in kachikachi, the NES Classic Mini emulator
66

- Firepower 2000 (SNES): to create a title screen just like the megadrive's one or to add the text "start button to play" and "select button to choose vehicle"

- Mega Man 3 (NES): a patch to fix ONLY the glitch of the select stage screen (the line above Shadow Man)

- PacMan (NES): a maze editor like blinky for Ms. PacMan

- The King of Dragons (SNES): the manual shield option is not very responsive. I wonder if there is a way to fix it.

Video 1: any Mario RPG rom using hakchi2 (with and with no patch, doesn't matter). This one has saves issues.
Video 2: stock game, extracted using ftp server, with a patch using darkakuma's sfrom tool (I applied the patch to the sfrom rom directly). This one works fine.

Since the patch works with the stock game, I solved the problem. Thanks.
68

« on: May 07, 2018, 11:39:44 am »
Just a curiosity. I uploaded a Mario RPG rom with a patch (pal button colors hack) and the game was overwritten the savestates every time I loaded one of them, even if I didn’t save the game previously. Then, I tried to upload a Mario RPG rom without the patch and the save issue was there still (so the patch wasn’t the problem). Even if you started a gameplay save ingame, the save was overwritten. I didn’t know if this was a ingame save or a suspended point problem. I tried different roms of the same game and the problem persisted. I used a sfrom to sfc tool converter (I wanted to apply the patch to the stock game but I first needed convert this one to sfc) and the problem was there yet. Finally, I applied the patch to the original Mario RPG game (the stock one, with sfrom extension) using the darkakuma’s sfrom tool and… surprise!! The strange savestate issue was solved and the patch worked fine. I reversed the process, using the sfrom tool to convert sfc to sfrom and the problem came back. With hakchi2? The same bad result. In summary, the saves only work properly in the original stock game of Mario RPG, while a Mario RPG rom converted to sfrom through hakchi2 or darkakuma’s sfrom tool has save issues ever. Im not a hacker, just a gamer, I comment this case if may be help you to fix other games with save issues. If you want to test it, get a Mario RPG rom and create a suspended point even before an in game save (you can do that before the first battle against Bowser). In the main menu, you’ll see the messege “If you continue from this suspended point, your game’s save data will be overwritten” again, again and again.

*By the way, any progress with games like Lufia 2, Eartworm Jim 2 or ActRaiser 2? I’m testing Lufia 2 to find some more battle graphics issues. I’ll notify you if I find them.
70

« on: March 25, 2018, 05:05:05 pm »
Oh, thanks a lot for test the game and the quick response. I had been turning on/off the game mode of my TV and nothing changed but I have just turn on an option called HDMI True Black and the problem was fixed! So that was the problem with my Harvest Moon, a TV "issue". Sorry if you are been wasting your time with a problem which didn't exist in CANOE. Luck with the rest of games, I'll follow this thread from now to see the progress.
72

« on: March 25, 2018, 07:49:44 am »
Sorry for the bad quality of the video. Here you can see the Harvest Moon's graphic glitch I've been talking about. This ONLY happens in fall season at night through the forest. I have tested it with Snes9x and does NOT happen.
https://www.youtube.com/watch?v=d6ZA7X_6wLc&feature=youtu.be

On the other hand, nice to see people taking care of running games with CANOE. Thanks to everyone for the hard job.
73

« on: March 24, 2018, 03:45:25 pm »
Hi! Has anyone notice a minor graphic glitch in Harvest Moon running with CANOE? Go to the forest at night in fall and you’ll understand. While you’re running through the forest, the leaves are orange, but you keep stand and the leaves become brown. I have tested it with Snes9x and doesn't happen.
Pages: 1 2 3 [4]