I'm proud to announce that the patch is finished and ready to download here! https://www.romhacking.net/translations/5850/
It's been a lot of work and learning, but I'm so happy of having completed my first ROM hack.

Thanks again to my collaborators: PhantomandGhost (for graphics), and Farlight (for testing and going through all those first-play bugs).
I finished the game with all side quests yesterday, and hopefully everything's working now.

ROM Hacking Discussion / Re: I can't change a pointer that... isn't a pointer?

« on: November 25, 2020, 06:23:20 am »
I've been trying several things, but still can't achieve anything.
Sometimes, even erasing the pixels that are part of the picture messes the entire graphic.
So I don't know how to proceed, if I can't even erase the Japanese letters.
That's why I thought that maybe there's some sort of compression going on. And that trying to directly edit these graphics in a tile editor isn't the right approach. Honestly, I've never seen graphic tiles that behave in this strange way.

« on: November 22, 2020, 01:37:41 pm »
I've recently translated a GBA game: Fullmetal Alchemist-Sonata of Memories. But there are some graphics that I still can't edit.
At first glance, they seem uncompressed. But there is code inserted in the middle of the graphic. I think these codes control the offset shifts between one tile and the next (not all tiles of the graphic are at the same offset).
It's better seen in the image below. On the left, it's the tile as it appears in-game. On the right, it's the tile in Tile Layer Pro. 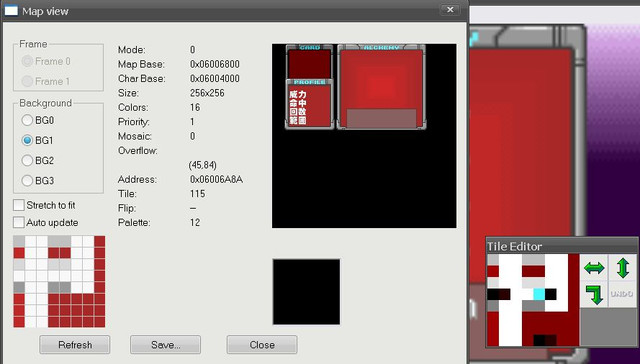 As you can see, the code appears as strange pixels that aren't part of the actual graphic.
The problem is I can't delete those pixels without messing the entire graphic, and they often get in the way when drawing English letters.
Other than this, even when the tile is clean enough, the drawing may behave in unexpected ways. For example, pixels may appear mirrored, or shifted to the left in-game.

Anyone knows what's this about? Is it some kind of compression? I don't know how to get around this. I could edit some with much difficulty, but others seem impossible.
5

Now comes the testing phase, and there's still unedited graphics. Some of those will take me some time, because uncompressed graphics in this game tend to be all scrambled, and some do weird things when changing them.
But the tough part is over. If everything goes right, I expect to release the patch in one or two months.
6

« on: October 21, 2020, 01:45:14 pm »
Thanks to the contributions of PhantomandGhost (https://www.romhacking.net/forum/index.php?action=profile;u=68382), this game has now a translated title screen, as well as more edited graphics. 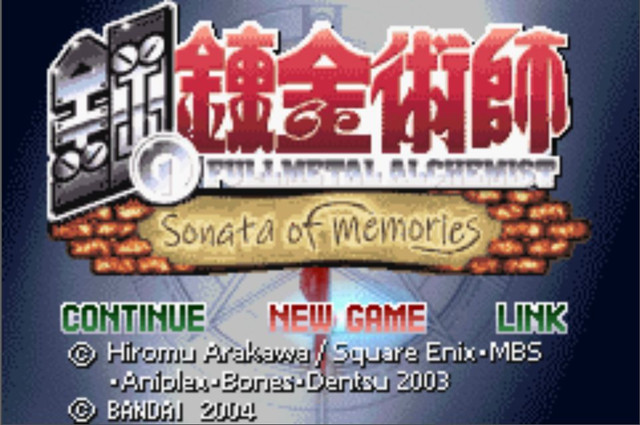 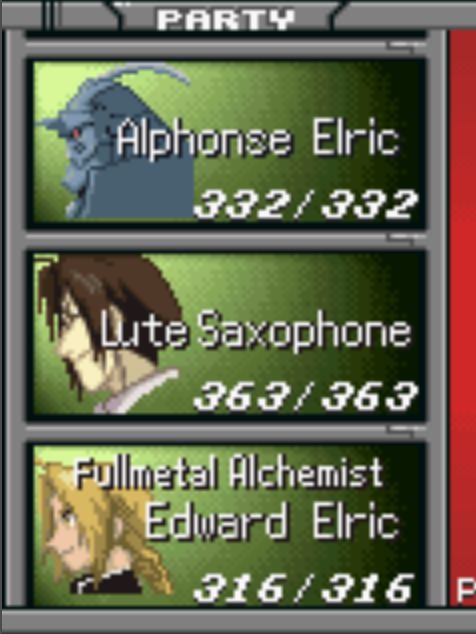 Thank you very much, PhantomandGhost!

I can always use a beta tester. When I'm done with the dialogue, I'll send you the hack to review while I finish the graphics.

« on: October 03, 2020, 11:04:27 am »
This is a RPG based on the Fullmetal Alchemist anime, for the Game Boy Advance. Sonata of Memories is the continuation of the previous game, Stray Rondo (which was already translated, here:https://www.romhacking.net/translations/2882/).
The story follows Ed, Al and Winry, as they investigate a series of bombings by a mysterious organization, Liberale. This leads them to chimera outbreaks, and they're joined by a girl named Viola, a detective named Lute, and other characters from the show.

I started working on this project a few months ago, and the translation is pretty advanced right now. I'm following this FAQ for the main story text: https://gamefaqs.gamespot.com/gba/921186-fullmetal-alchemist-omoide-no-sonata/faqs/31442, and the font is the same of the previous hack.

This is my first ROM hack ever, and maybe I'll need some help with graphic editing later on. But I want to finish the text translation before, though I have already edited some graphics. So, if anyone wants to help with graphics, I'll be very grateful.

These are the areas that are translated so far:

I'll update this post to show further progress. Here are some screenshots: 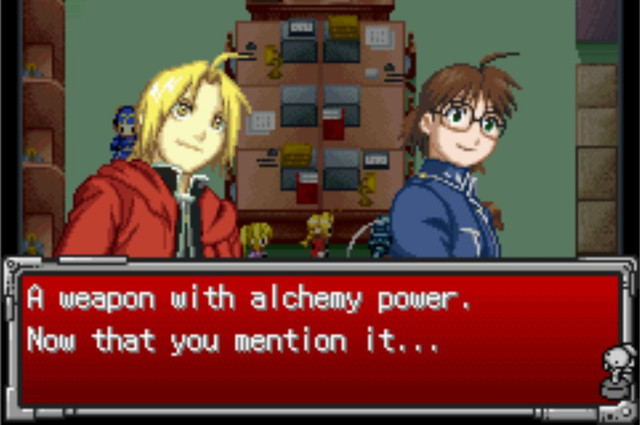 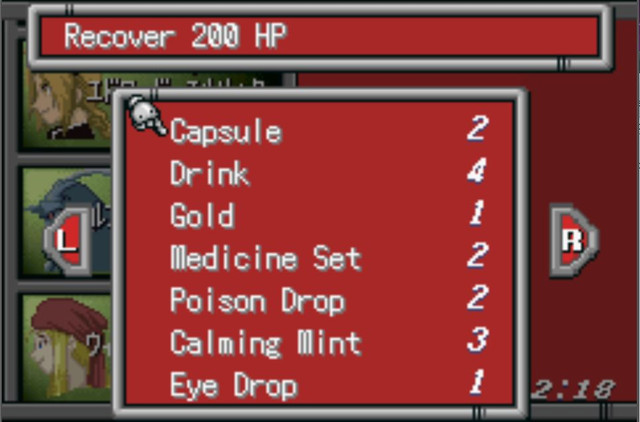 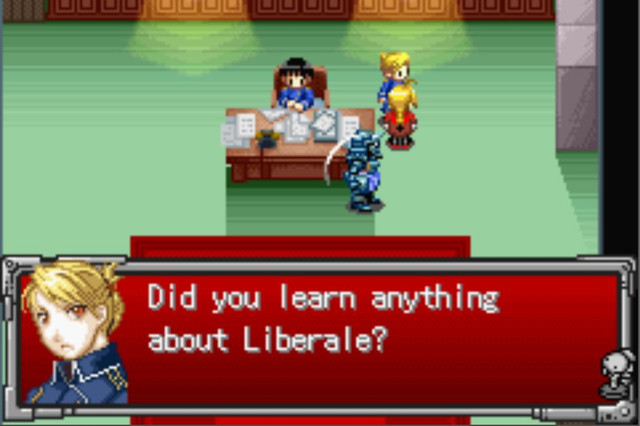 « on: May 21, 2020, 03:56:04 pm »
I tried moving the letter combos to the top of the table, but it didn't change anything. Windhex still gives priority to the single letters.
I also tried using a special symbol that doesn't appear anywhere else in the table, but in that case, Windhex didn't even let me type the symbol.

If you don't mind, which program did you use with your tables? I'm starting to suspect that Windhex simply doesn't allow letter combinations in tables.
10

« on: May 21, 2020, 02:03:04 pm »
I'm trying to learn how to implement "squishy tiles" (that is, a tile with two letters drawn, instead of one). A major problem I've had thus far with rom translation is the lack of screen space to fit all the letters. Since VWF is too complicated for me, I thought I'd give this method a try. So, for example, I have a table like this:

Is there any way to convert text to hex using the combinations from the table? Or do I need to input it directly in hex, whenever I want to use a squishy tile?
11

« on: March 11, 2019, 03:35:33 pm »
Ok, so after messing a lot with the Mednafen debugger, I finally achieved "something". I opened the graphic viewer to check the memory address of the font. Then dumped the proper addresses from memory. In a hex editor, I moved the font hex values one offset above the original one. Then loaded the edited memory in Mednafen.
This the result (before and after): 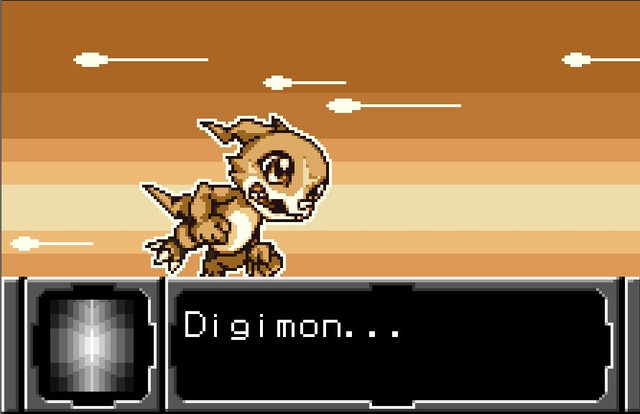 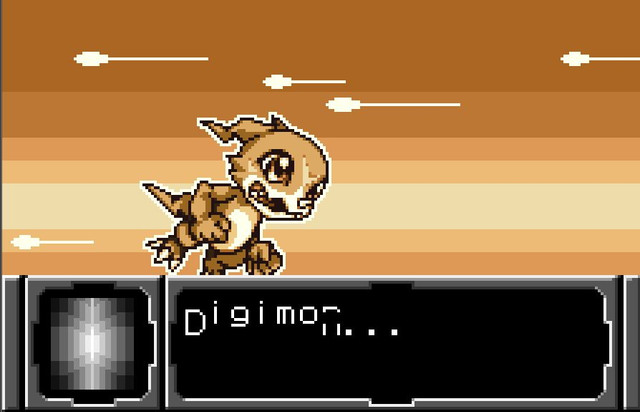 It looks still wrong because I didn't edit properly all the RAM, but you get the idea.

Is this a good start? I'm not sure how to translate this to a permament change in the ROM, though.

you might be able to expand the number of text-boxes by adding '0A' after the terminating 'FF' byte for the text.

I tried this but, unfortunately, it doesnt work for this game. The code still reads a fixed number of pointers, so it ignores whatever extra textboxes at the end. I havent seen any other code used in the original ROM for something similar. It's always one textbox = one pointer, even if the speaker is the same.
13

« on: February 24, 2019, 07:55:11 pm »
I started working on the Brave Tamer game recently (translated up to the first boss, attacks, some items and the like...). It's awesome to find now that you're working on this game and have almost finished!!
I dont know if it will be useful for you at this point, but theres a German translation of Tag Tamers: http://www.snes-projects.de/filebase/index.php?page=Entry&entryID=486

Theres also this debugging tutorial which I found moderately easy (though I havent accomplished much yet in the debugging department):https://m.youtube.com/watch?v=BHYjxsDROn4

By the way, how did you translate the menus text? At least in Brave Tamer they're nowhere to be found. Guess its in compressed images?

Anyway, good luck with this project!

You would have to use the debugger to track down the lines of code that displays text to the screen and change it so that it treats each character as being less tiles than it currently does.

Yeah, this is more or less what I wanted to do. I'm not sure if writing code would be necessary for the third line. The game already shows a third line below the second if you add it in the hex editor. Perhaps reducing the interlinear space would suffice, so it doesn't appear so low in the screen.

I've been using Cheat Engine attached to a Wonderswan emulator (Oswan) and can find the address for the text lines, as well as the instructions which write or access that adress. However, upon disassembling, I haven't found any numeric code which could relate to X-Y coordinates, or tiles per font, or anything similar. I'm sure I'm doing at least a dozen things wrong when using the debugger, so I still need to learn much about this. It's not easy because debugging tutorials aren't aimed at beginners.
I also found this post about a similar issue in a game of the same series: http://www.romhacking.net/forum/index.php?topic=14148.0
19

« on: February 19, 2019, 03:22:03 pm »
I don't know assembly, though I've been messing around with some debuggers. But apart from changing the text color, I didn't find anything related to font sizes. A relative search in the ROM for possible widths didn't bring up anything either.
Well, I suppose I can try to fit the text in the limited space.

« on: February 18, 2019, 04:32:39 pm »
Hello.
I'm trying to translate a Wonderswan game (Digimon Tamers - Brave Tamer) but I think I've reached a dead-end. Although I found a way to change pointers and have plenty of free space in the ROM, the font of the game is so big, and the textbox so small, that I'm still very limited with the text.
I haven't found much info on this subject, let alone for the Wonderswan, so I'd like to know if there's some workaround for this.

I have thought of several options:
-Reducing the size of the font (specially the width)
-Expanding the screen area which the game identifies as "textbox" so I can add a third line of text (right now, adding a third line causes graphical glitches)
-Turning the current 8x16 font tiles into 8x8 tiles (not sure if it's even possible)
-Inserting additional textboxes (though it seems the number of textboxes is fixed for a given scene)

However, I don't really know where I should begin, or what's the complexity level of this. I might consider abridging the text to fit it in the current screen, but would like to know first if there's a better solution.
Pages: [1] 2