If it's just for the sake of challenge, I would be more inclined to work on an optional hack to completely skip Parts and upgrades when playing on Xtreme mode. How does that sound?

Sounds like a cool challenge for the seasoned veterans.
2

And I can't post part_2 as I already reached the limit.

I just noticed the GUI doens't scale properly on high DPI settings.
I'm gonna make a quick fix to at least make it functional (v2.6.1). In the meantime, you could disable DPI scaling for this program:

Just a fluke. on the disc compiling Nothing caused by the last change. Should've given it a quick test before uploading.
BETA 24 is up now, it should be ok (at least for that issue).
Thanks for testing!

So much effort going through this. Awesome work as always by making these games appealing again.

What I remember clearly, is that they were a PAIN to complete 100%, mostly due to the awful Game Link stuff and the Rings being locked behind that (and some to RNG), and a previously finished save from the other paired game to unlock the final rings.

Very weird. That's exactly what i like about the Oracle series, the fact that you can continue the games after finishing the other story, a la Resident Evil 2, with unique story elements and items. That's even the whole basis for the Pokémon series, which does in fact mandate cable linking between 2 consoles, where at least here it's completely optional, whether you use the password or the link cable. I own both physical games and still enjoy them to these days. Along with Link's Awakening i play and finish them in succession once a year.

Anyway, i will surely use your improvements whenever they are out, as you have done memorable QoL improvements in the past for the Zelda games which i totally enjoy.

Oh, my...! But this is completely unfinished!! And how uggly menu fonts! They've just romanized the kanjis! Lol, how funny. And how orthopaedic.

Not even crazy I work over this one.
But it may be very useful for finding out the bugs (or try so).

Are you continuing your work with DQ III? That would be great, since your patch is the reason i started playing the series again, with the intent to finish them all.

Unfortunately I havent heard from DarkSamus for a very long time.
Without somebody who understands ASM to hack the rom or C to use the available Sourcecode it is not possible to continue the project.
I am not sure how to proceed any further. Many hours haven been invested in that hack aleady. Would be a shame if that was all for nothing

I could suggest to maybe ask for a hand in the nesdev forums.
8

Personal Projects / Re: Castlevania Symphony Of The Night [PSX]

I come to you with the game Castlevania Symphony Of The Night on PSX which has been fully translated into French.
The hack comes from Gemini and the base of the translation was done on the Italian translation.

The patch must be applied to the original Japanese version of the game which is:

The fix must be applied using PPF-O-Matic 3.0 which can be found here :https://www.romhacking.net/utilities/356/ 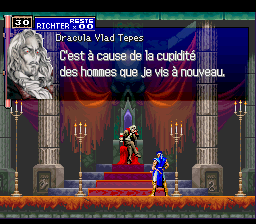 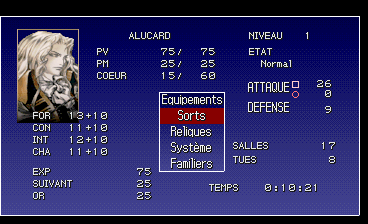 Looks very nice. I'll give it a try, this is great for my french practice.

Speaking of bothersome little details, I love vanilla MM7 but the way MegaMan aims his Mega Buster when charging it seems very out of place for me, he doesn't do it in any other game...

This is my final wish regarding this hack. I already finished it twice with the original rules, so i would definitely enjoy it and replay it much more if the game could be refined out of it poor choices (some of them covered by refit), MM7 stands out as the weakest game in the series, a particular shame since the 2d art is beautiful.

Honestly, this hack started out exclusively as a modification for the Charge Shot and I-Frames because I was bothered by the increased charge time and decreased I-frames, too.  Mega Man 7 is a really great game, and one can just as soon play it using only the weapons and Super Adapter, as I usually did.  Luckily, though, an idle thought became a project thanks to the help of one DarkSamus993.  And, once DS993 got more interested in poking around at values, more was able to be changed and the scope expanded outward into something I'm really happy to have made!

Awesome hack, Mr. You did a fine job in making a game enjoyable again.
10

There was another project that was released before this. That's probably what stopped development.

That one was abandoned permanently.
11

Looks good. Is this already available as a patch?
12

I'm gonna update both releases with this fix right now, it was a simple mistake.
As for the rest of the BETA bugs, well, just keep listing them, there's gonna be plenty.

Ah! I was wondering what happened since i was downloading them a couple of minutes ago, about to continue with 1.6.4 and it errored out.
13

Guys, I got two very important achievements: I restored the floating objects from The Pit 3, and corrected the colors of the names that appear in the final victory (i only paid attention to it later) 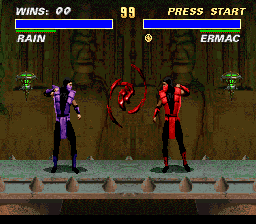 How NBA Jam cheats against you | MVG
https://www.youtube.com/watch?v=Kyk2s4HTPpk

So the 2K22 will much more fully leverage the Mattrizzle Player Engine, meaning many more current players, plus a few additional surprises, thanks to Mattrizzle himself.  Here's another teaser of the features list from an old version...

Impressive, seems you guys already breaking the boundaries with Jam modding. Thanks for keeping this game alive for so much more years to come.
15

Alright, so both hacks do work together, they're just a bunch of typos in the script when you do that.

The latest update of my hack features a alternate patch that adds the two gameplay changes that I mentioned from Refit, so people don't have to worry about combining both hacks anymore.

I did contacted the people that made the MMX re-localized hacks if they're interested on giving MM7 the same treatment, no response from them yet, but hopefully soon.

Niuus, I wanted you to forgive me for my comment when you posted about silent updates or when it was named "just" as final. I understood that I was just bringing in updates and making them silent or not caring that they were seen. As I said, I don't have much knowledge about how hack updates are structured and released to the public, and I haven't completely adapted to the site either.

.
I also need the translator to communicate here [because it is worth mentioning that I speak in Portuguese], I often need more than one translation platform so that the messages don't have "translations" contrary as sometimes happens. I was just unhappy in my comment, and I recognize that, but don't judge me for misunderstanding.

12/28/2020). I will have the humility to apologize if I was inconvenient in some placements, but after so many experiences from all of this (be it threats, lack of a team on the project, haters attacks and judgments, even dedicating myself to the the maximum), I started to be more rigid in relation to some users and situations.

I would like to clear this whole situation here, as this whole subject is quite stressful, and really be able to focus on the development and news of the hack. If someone has the solidarity to work with me on this project, and wants to help me with sounds, sprites, ASM and other things, express themselves by private message or whatever you want, That would make things extremely peaceful, and i don't want to work on it alone.[/i]

No problem. Let's move on from wrong translations and misunderstandings.

Blade and I did some experiments with Restoration and Refit.

Refit is not FIT(pun) with the translation, and ironically, it FREEZES when using Freeze Cracker at Burstman (since it can't find his weakness animation).

That's what i commented previously. It happens only when you use MSU-1 on top of Refit.
18

This was made by hand and not everything was tested but it should help if you or anyone else is interested
in changing the gfx from SFZ2 to SFA2. Some of the levels might need other things besides the gfx transferred
to function properly.

. Who knows if the SFZ2 full Birdie stage plus the bathroom stall animation could be pulled off in SFA2.
19

What emulator are you using?

Snes9x RX 5.0.0, which is where i leisurely play and take those screenshots. Whenever i find a bug, i go and confirm on bsnes to discard issues with the emulator.

I didn't know there was so much problems getting both the Restoration and the Refit hacks to work right together, they use to work somewhat alright when you combine them back then, I'm guessing the latest version of Refit changed some things that makes it incompatible with mine.

I updated the description in my hack alerting everyone that it's not compatible with Refit anymore. Sorry everyone, I didn't know.

Oh, but they do work. It is just those minor typos shown in the pictures (i added a pic with the one mentioned by G30FF).

The only thing I can think of is make a alternate patch for Restoration that will add the shorter charge time and the increased invulnerability from Refit.

That would be great. The reason i use Refit is mostly for a bit more dynamic gameplay when compared to vanilla, which i already finished fully with Restoration+MSU-1.

I certainly wouldn't mind keeping the charge animation from vanilla but removing the dorky 'shooting pose' from Mega (contrary to Refit which removes the buster charging animation), but maybe i'm dreaming too much.

That might be the better option, because I was thinking of getting help on re-localizing the script to be closer to the one from the Japanese version like the other users on here did with the SNES MMX games.

Sounds great. All of the retranslations done for the Mega Man games have been a blessing.
20

This is what you've all been waiting for

It's labeled version 1.0 so technically not a beta, but please post any bugs or issues you find and I'll sort them out before posting a full public release to the RHDN database

When reporting bugs/issues, please include screen shots so it's easier to track them down

I suggest adding to the readme the ROM name and hashes. Right now i have what i think are two of the most used:

No clue what is the correct one, i'll just patch both and cross fingers.