May 27, 2019, 07:21:59 PM
As a person who has played F-Zero Climax, I always hated how unbalanced the game was. Some ships were extremely overpowered *coughelegancelibertycough* While others were impossible to control. You like playing blood Falcon in other games? Oh boy, you will hate playing as him in this game.
#22

I already explained my big reason for wanting the hack, and it's not because I'm a furry.
#23

that is probably what would make the most sense, plus he has existing sprites that might not be too hard to splice.
#24

A big problem I have in the real world that I tried to get away from when playing video games is anti environmentalism, habitat destruction, animal cruelty and other forms of zoosadism. I also generally prefer not playing as humans in video game for this reason mostly. Despite that, I do not dislike Mega Man as a character. The fact that he fights alongside a robot dog, robot bird and robot cat tells me that he has consideration for life other than humans. It also helps that the vast majority of villains are other robot humans much like Megaman.

Mega Man X, on the other hand, is a zoo sadistic Eco Nazi. His enemies are mostly animals and he hasn't shown any consideration towards any creature other than humans. Playing his game towards the end would basically mean ensuring that this guy succeeds in his goals, and from what I can tell, his goals are pretty much only to save humans and to f*** with all other life.

Honestly, fixing this wouldn't be hard. Just change Mega Man X to look like a different creature. If he look like a cat or a dog or a sloth or, really, ANYTHING but a human, I would not be reminded so heavily of the reasons I play video games to get away from. Besides myself, a hack like this would also it appeal to furries. If you changed the levels as well, which wouldn't be that hard since there are programs, you could broaden the appeal even further.


Long story short, I'd love to see a hack of the Mega Man X Games that changes X from a human to an animal.

Edit: from what I can tell, Mega Man X's Sprites do not require extraction, and can simply be edited with tile molester or a similar program.
#25

September 04, 2018, 11:47:59 AM
I think I do get some other things. The wall might actually look better if it was simplified. Also, the trees + the background are wrong. The trees should be their own tiles and not have a backvround.

Thread was locked because this is a for profit project and it also is somewhat beyond the scope of the site. We try to reserve Personal Project and Help Wanted Ad threads on this site for actual rom hacks. This would very loosely fall under homebrew, and even then only in the music aspect relative to retro game hacking. Since we don't intend the forum to be a place of financial transactions between members, including labor, this thread is somewhat at odds with that mindset. For now the thread has been left locked but not deleted so as to not erase prior discussion if any involved parties want to discuss this matter on another site or via PMs.

Quote from: FCandChill on September 03, 2018, 08:35:02 PM
Going to the Famitracker forums is your best bet. Also, where would this game be released, how many people are working on it? How many tunes need to be made?

For now, it's just me working on it. That's mostly because I don't want to be that guy who wants to hire a bunch of people and expect them to do all the work while he quote-unquote "directs." I do have a friend helping me with dialogue, but that's about it. Also I want to release it on multiple platforms, and I'm using RPG Maker MV to make this game.

I don't have everything planned out as of yet, but I plan on having at least six major bosses, and about as many levels and towns. This is going to be a very story-driven game, with the characters getting a lot of development. I can't quite estimate how much music and sound I need.
#29

Quote from: nesrocks on September 03, 2018, 11:15:31 AM
Many things. If you want to discover why, try replicating the screen, including the text and textbox, using Nes Screen Tool. https://shiru.untergrund.net/software.shtml

For now, the text and text box is just a placeholder for when I make 8 bit Windows and find N8 bit font.
#30

August 18, 2018, 03:21:44 PM
Honestly, I've been wanting to get myself out there for the longest time. Right now I'm trying to make a professional-grade RPG Maker game called Arctic Antics, a game starring a psychiatrist sea lion, a sumo wrestling walrus, a gay rockhopper penguin and a crafty arctic fox on a mission to take down tyrannical elephant seal who has banned parties. I know it's kind of a silly concept, but that's my style. I want to make something cute and light-hearted that doesn't star humans as a way of putting something different out there into the media.

Because I'm not a great graphic designer, I decided to go for a simple NES Style with my graphics. This game will be made in RPG Maker MV. I've already decided I am doing all the graphics and coding myself, but would like to see if anyone would be interested in making music for my game as a way to help make things easier for me. If anyone is interested, let me know. I would be very grateful and agree to split any money I could make off this game with you.

I forgot to mention that in particular I am looking for someone who is experienced with using famitracker. I'm trying to go for a semi authentic feel so I rather have actual 8-bit music instead of chiptunes.

Edit: I guess I should show a screenshot. 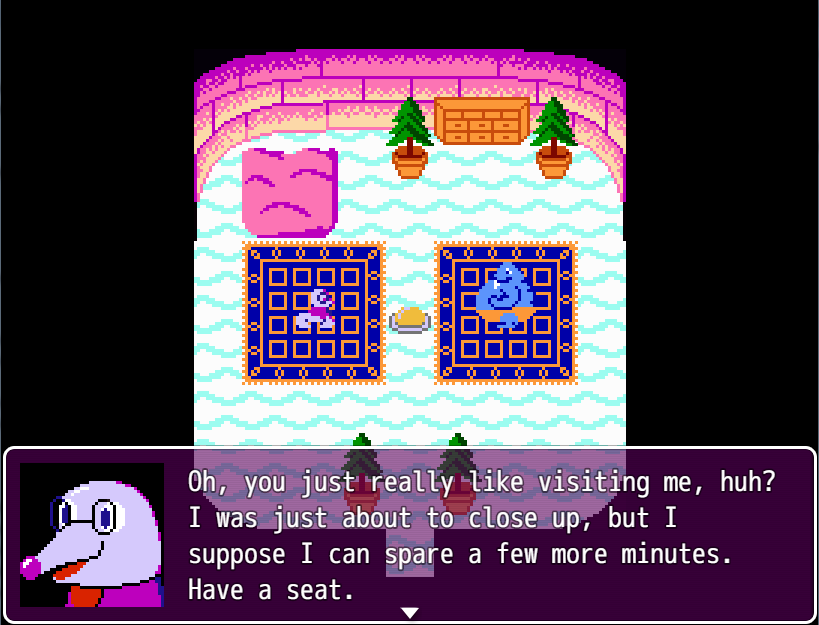 February 07, 2018, 02:37:50 PM
With the Aria of Sorrow translation hacks, I wonder if any of them felt the need to rename Kyoma Demon to Paranoia. For some reason, I feel like Kyoma Demon from AofS and Paranoia from DofS are supposed to be the same guy.
#34

ROM Hacking Discussion / Re: Is hacking sprites in a Amazon Kindle game possible?

But what I'm trying to do is harmless, I just want to make a minor hack for myself. If anything, I may want to let others try it for free, but I wouldn't charge money for something so simple.
#37

ROM Hacking Discussion / Re: Is hacking sprites in a Amazon Kindle game possible?

If it's anything like Square-Enix's other releases, the game will likely be packed in an "opaque binary blob".  It is probably possible to make changes, but that is not something that is regularly done and it would likely be a lot of work.

And of course once you hack the game, you would have to jailbreak your Kindle to let you install arbitrary packages.  And I'm sure Square has some sort of DRM in place to discourage such alterations.

Wow, all that for one image? That sounds kind of stupid, especially for something I won't be making money off of.
#38

December 26, 2017, 01:35:55 PM
I bought Dragon Quest for my Kindle reccently, and upon watching a video fight of the final boss, I found out that the final Bosses dragon form is kinda small. I wanted to make it bigger for when I fight him to give him more pressence. Is there a way to do this?
#39

Quote from: Psyklax on October 18, 2017, 05:48:13 AM
If you know what you're doing, it's as easy as pie, though I've no idea what system or even what genre you're referring to. I presume it's RPGs? Gimme a specific game with a specific boss and I can show you how to do it.

Now that I think of it, how hard is having Arcade games? There's a boss in an unreleased game called Chimera Beast. The fourth boss is a huge alien crocodile who happens to be the biggest boss in the game. ...Which pains me over the fact that he's the easiest boss in the game (why is it always the coolest boss in the game that's the biggest pushover). All of his moves are destroyable and, despite his size, he takes the least amount of hits to beat.

Quote from: KingMike on October 18, 2017, 05:49:19 PM
Just increasing hit count I don't think increases the challenge in a good way.
If it's just the same shit repeated more times, that's only making it more tedious.

I was absolutely shocked to find Intangir (was that it's name, the invisible enemy) in Final Fantasy VI Advance was meant to be Death-immune. 32,000 HP for a World of Balance wild enemy is total bullshit. I can't remember how long it took to even kill one of those things for a Bestiary entry. 10 minutes maybe? FOR A RANDOM ENCOUNTER! I don't think even WoB bosses had that much HP, did they?

I think if the boss is simple enough and open for attacks frequently, it's fine. The Dragon's head is open for attacks more often than the Trent or the Clown, so I think at least bringing his HP to Trent/Clown's hard mode HP count would make it a more balanced fight for a later boss.
Pages 1 2 3 4 5 6 7 ... 16