« on: December 14, 2020, 07:33:08 pm »
Tomba 2 (PS1) Improvement:
-Better camera angles+somewhat less zoomed in view - plenty of times when moving into a crossroads the camera is placed more behind the player making it seem like pressing up=forward when really you're supposed to press left/right, and sometimes it picks a bad angle right after switching paths
-More intuitive path switching - can press the direction that seems natural when moving between paths and positioning requirements are less specific when trying to interact with paths (and NPCs). You can also be in mid-air while switching paths
-Skippable in-game cutscenes and event title texts
-The flame pig's location is switched to the first area so the black locked doors can be opened sooner - this might require some other tweaking
-Can walk while charging your attack
-Somewhat faster acceleration and jumps to mirror the prequel
-Lower default jump height (this+the longer air-time makes some platforming kinda clunky since you also can't press up to climb a cylindrical object you're grabbing onto (can do it with regular ledges))
-Circle is used to confirm in the save menus as well
-Switch suits with L2/R2
-Can cancel gliding during a glide jump and stop hovering after jumping in the squirrel suit
-Fixed hit detection when jumping onto poles from above
-Can access the inventory while facing an NPC or flower on the z-plane
-Less floaty jumps while wearing the swimming pig suit
-Removed backtracking for the cogs after reaching the water temple
-The pointless path from the circus village to the beginning of the forest via an "invisible state lock" door leads somewhere useful
-Fewer invisible walls where possible
-Faster revving up of the spinning poles and winches
-Some new enemies appear in previously visited areas when backtracking
-Can have the chef make more than one sandwich at a time
-Some out of the way chests have better rewards
-Fixed draw distance priority on chests - fairly easy to miss some of them
-More forgiving hit detection on the seed items/clues you can grab in the minecart mini-game
-Get more than one shot at grabbing the rare shrimp in the forest without having to reload
-Removed VA re-takes that were left in
-Restoring an area removes or changes enemies and hazards within it
-Harder giant ice pigs in the snow area/ranch and mini-boss in the forest
-Harder main bosses overall
-To make the final boss more interesting you have to use some of the weapons to stun him and/or switch between suits or use the grapple to reach him
-The one-way path between the water temple and the beach through the waterfall can be used as a shortcut
-Longer and harder tower areas in terms of platforming and combat
-Added enemies or platforming challenges during the "destroy the evil pig statues" quest before the final boss

« on: December 13, 2020, 06:59:22 pm »
Oh yeah, I completely forgot about that PSP version. It's so... saccarine and sort of sterile at the same time. I might still play it at some point though.
Then again it might represent how he changed his view of what classic Mega Man should be over the years, and after the MMX series.
103

« on: December 12, 2020, 05:46:10 am »
Interesting, any particular Depeche Mode song? The main riff and beat sound more hard rock to me. DM has made various songs that are mostly rock though.

Yes MM1 is a bit more serious and less cartoony at times in comparison to later games, I can see that. But as you say it also feels like a result of the aesthetics not being fully developed yet. Anyway, MM1 Wily 1 is a nice tune for what it is and doesn't end up feeling too repetitive as you're playing the game.

My fave from that year has to be After Burner II's title track.
104

Gaming Discussion / Re: Lo-Fi Beats For Remembering the SNES

You did ask for it

That Switched ON guy kinda has it right though except it's electronic. Sorta chillwave/dream pop-like

Gaming Discussion / Re: Lo-Fi Beats For Remembering the SNES

Some of the most lo-fi music to be found on the system.

Gaming Discussion / Re: What to play next? (retro AA & ARPG edition)

Gaming Discussion / Re: What to play next? (retro AA & ARPG edition)

Gaming Discussion / Re: Born of Dreamers - formerly Secret of Evermore 2

Great questions, thanks for bringing these up. When it comes to Evermore, these are big topics and many people are wondering if these features will return.

Let me start with three of your questions which are regarding spells, including the question about ingredients/collecting.  I'll answer those three now by saying the magic system is something we are leaving for later. It's not a priority at the moment, though I will say that there are plans to create magic in way that reflects a simplistic version of alchemy.

This will allow for collecting still, also the spells would be able to be assigned to 1/2 hot keys which would allow for real time casting. As far as dodging spells is concerned, it's something we have yet to tackle. I'd like to make it so that you can do so, it all depends on the combat mechanics being done first. If it ends up being to easy to abuse, or not useful enough, etc, etc. We need to test these things once combat is further along otherwise we will have to rework it all again later.

As for co-op, depending on the final result it may or may not fit well with the game. I'm thinking I'd like to include the feature but it all depends on if it would cause issues. I noticed in Evermore even, that if that feature wasn't included there was a reason. After testing out the patch with the feature added, it causes many problems due to the design of the game. Many of these features would be even more of an issue unless addressed properly and therefore unless I put the extra work into that feature it would all depend if fans really want co-op.

Keep the questions coming, also feedback is welcome. We'd love to hear your ideas and thoughts!

Hey, thanks for the quick response. Sounds good so far. Well, I for one like most of the enemy magic being dodgeable like attacks/movement are, at least like in Evermore where you could use healing items and some spells IIRC and if you timed it right you would dodge via the invulnerability frames gained during the healing animations.

I also liked the grouping together of similar spells and weapons that the rebalancing hack of Evermore did, cutting down on grinding new spells each time if you wanted them to be useful. Just a sidenote.

I think if you're also going for the SoM fanbase you should consider co-op, it would be a cool addition and could make for some interesting puzzle design a la Goof Troop or Zelda 4 Swords, but not a must of course. Will be interesting to see what you come up with for the puzzles!

I am of course curious about the setting and historical periods it will feature (and how it affects the dog), though I don't mind being surprised either.

Gaming Discussion / Re: Born of Dreamers - formerly Secret of Evermore 2

« on: November 20, 2020, 10:28:34 am »
These are WIP categorizations of retro MV subgenres and related genres based mainly on structure (click links for full size). 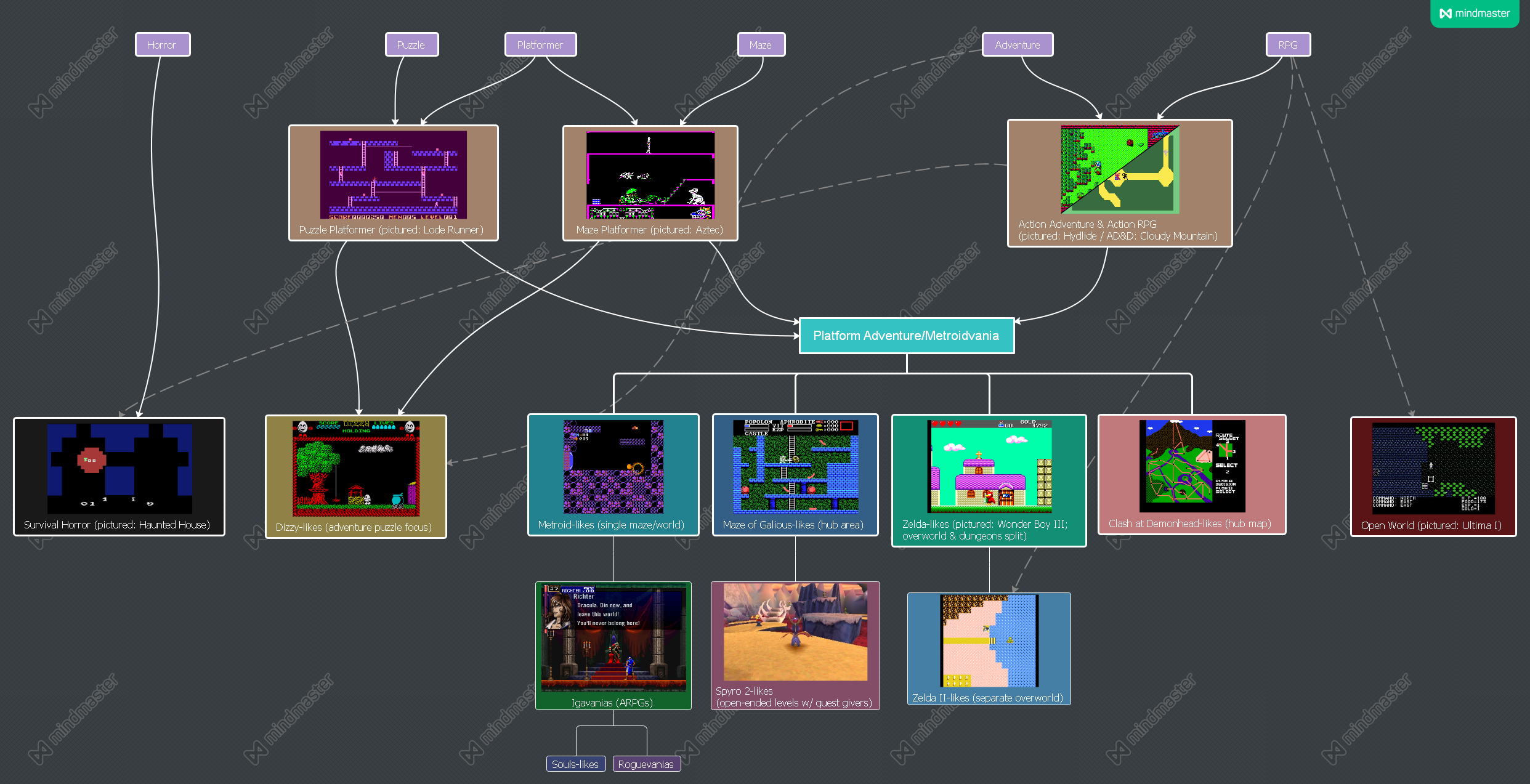 « on: November 19, 2020, 05:22:51 am »
Demon's Crest (SNES) Improvement
-Form switcing with the shoulder buttons
-Some items are better hidden instead of just lying around in easy to get to and unguarded spots, placed sort of haphazardly (for example the room at bottom of plant infested tower, room behind wall in burning forest)
-Make it impossible to miss jewels gotten from bosses
-Make some of the forms and spells more useful

« on: November 13, 2020, 06:31:58 am »
Kirby & The Amazing Mirror (GBA) Improvement
-Can switch between the Kirbys in SP to use the others as an ability inventory of sorts for ability gated paths
-All one-way paths between rooms removed so you don't have to replay a level from the entry point if you screwed up a puzzle or didn't happen to have the right ability at the right time (hard blocks for example)
-Puzzle elements (chain bomb blocks) reset when re-entering a room so you don't randomly get locked out of a path based on trial & error or from making one mistake
-Gameplay doesn't pause when CPU allies use abilities
-Better spark ability maybe?
-CPU allies can't trigger chain reaction bomb blocks and ruin puzzles for you nor can they push kirby

This makes better use of the allies and makes the exploration actually fun like in a proper metroidvania game, instead of tedious.

« on: November 05, 2020, 07:11:40 am »
Yeah I don't think that makes something techno unless you ignore everything else like what kind of beat, other rhythmic elements, harmony and song structure. Most of the MM1 music doesn't even have a strong beat, lacking a kick drum. But technically it all falls under electronic since it's chiptune and early techno is a bit more vague, more like a mix of electro funk, breakbeats and synth pop. I don't see how "electronic sounding effects" are an achievement when it's the default sound though.

That buzzing sound from Fire Man's stage seems like it's meant to simulate some acoustic percussion used in latin music using the upper notes of the noise channel on the NES which are more tonal. I think the other notes are sometimes making it sound like there's some slight modulation effect on it though which is more common in electronic music.
The backing harmony in that part of Wily 1 sounds like it was meant to be a string pattern except the instrument envelope is pretty stiff, you tend to hear things like that in classical/orchestral style music with a more ominous and intense tone. The main structure is very much hard rock/metal though.

Industrial is perhaps more vague than techno and the early stuff is very different from the late 80s-90s music and crossover styles, more like a dissolving of structured music itself much like the no wave movement. In a sense it applies since it's a lo-fi electornic aesthetic and a lot of people find it grating, but that's about as far as the similarities go I think.

MM1 is certainly more than techno though, I mean only Fire Man qualify's as sort of techno-ish to me and it has more of a latin (salsa?) flavor. Cut Man sounds kind of russian and like old anime music, and Guts Man like an old spy movie or something. Select, Bomb Man and Ice Man sound new wave-ish and Elec Man like the Journey song and Space Harrier theme (the latter being mostly synth pop). Wily 1 sounds like 80s hard rock/metal.

For me it was between Robo Warrior/Bomber King (mainly for the fantastic theme song but I also like one of the boss themes and the ending), and Ultima III and I went with RW.