« on: March 05, 2019, 08:53:58 pm »
Sorry, Timbo I mean! Just to be clear the multiple status effect i was talking about was about evil gate. The name evil gate just reminds me of something like pandoras box, afflicting almost all status effects at once. I'm happy for it to be a damage spell for primm though, love using damage spells with her.
Damn, I was thinking having it so it unlocks the spell after u reach level 8 for each spell, but if you can't do it, all good

Has anyone ever made a comprehensive list of the things that were obviously cut?  Paths that don't go anywhere, story-lines that aren't finished, etc?

Does the Japanese manual have anything that's not on tcrf?

I did a little bit of research in the past and looked at all footage and all the maps and put my findings here - http://acmlm.kafuka.org/board/thread.php?id=7789
but I think it would be impossible to restore the past work. What I meant was actually expand it to what we think it should have been.

Sorry for being off topic Queue. Just an idea, what if you made the magic do multiple status ailments like 'doomtrain' from ff8 if you played it (poison, confuse, death, etc), so even if it misses it has a chance at least do something else.

Or another idea, remove the lvl 8 powerful magic and have it as a stand alone 'summon' (so magic and summon would be stand alone in menu) which uses much more ap. Probably a useless idea but just throwing it out there

« on: March 04, 2019, 05:42:00 pm »
I'm so keen for this, finally SoM is getting the treatment it deserves.
I know this isn't in your scope for this but would be cool one day to make an 'expansion' of the game and add areas that were probably removed from the game. The Japanese manual (which I have) has beta screenshots as well as the beta maps that show some areas that were probably cut from the game.
4

« on: January 24, 2019, 08:45:15 pm »
Do you think you can remake the Japanese SoM intro with the English heading? I did a quick Photoshop of the intro and filled in the blurred part (someone might be able to make it better). Feel free to use it. 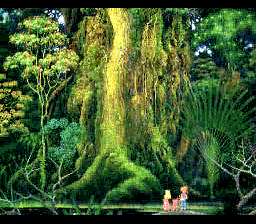 « on: April 23, 2018, 08:25:17 pm »
Congratulations Zhade, I've been following your progress from the start. I'm really happy that you have pulled through and created basically the greatest mod for my most favorite childhood game. Thanks again.
6

« on: November 30, 2016, 09:20:43 pm »
Yeah I like that idea, sounds sweet but difficult to add. This idea is a bit different and probably harder to do but it would be great to be able to go into a 'rage' mode where you basically move, attack and use skills faster, think similar to kingdom heart II's 'drive form'. If you couldn't speed the main character up, perhaps you can slow all the enemies down, if that is possible, to give it that slow mo look.

I was talking to mop before, he said he separates his hacks into individual C# source files. They basically dumps code in starting at 0x60000. You prob already talk to him but if you were to do the same I'm sure he could add your hacks into what he's currently doing now. Would love to see that collaboration!

« on: August 02, 2016, 01:29:16 am »
I agree with the separate patches, but if it's too much trouble then I'm fine with a 1 patch for all. When you said about the idea of fighting arena style, that's actually a really cool idea. Perhaps 2 people vs 1 monster, all controlled by people? Sounds interesting. I pretty much only visit this site for this thread, so just want to say that I really appreciate all your hard work!
10

you don't think SD3 Rabites would work in SD2 ?

I'm not saying they wouldn't work, I'm just saying they look like they are designed from a different artist and wouldn't match with the other existing sprites in sd2
11

Personal Projects / Re: The Joy of ROM Hacking Video Series

« on: April 07, 2016, 11:42:46 pm »
Ok I know this will never happen, but it would be awesome if the lighthouse was more like a dungeon where each level you go up, you need to fight a boss in order of appearance, excluding maybe the last few bosses. At the end you get the 9th orb.
14

... so Im thinking about starting again using a clean rom and modify my assembler so that instead of directly writing on the rom, it writes on a copy to make sure nothing is forgotten.....

I was thinking this a few weeks ago, I recommend starting again, I think it will be annoying at first but I'm sure you'll definitely be glad in the long run! And yes, great idea about making it so we can apply hacks separately as honestly, I'm pretty happy with the vanilla magic. The only thing that annoys me about the vanilla is that the magic can be abused and cast repeatedly to destroy bosses with ease.
16

This could be a bad idea, but about the run attack thing, and in general, the way your character goes from 0%-100% after attacking, would it be a good idea to make the character move similar to that when you are charging an attack during that time? Or would that too annoying?
20