October 10, 2021, 09:39:16 PM
I think the graphics you have shown while not many are very good. Working on 8 bit nes graphics is very challenging. Can't wait to play this. I agree with your assessment that the graphics really need to be fully changed to really set off a concept such as this.
#2

January 31, 2021, 08:12:20 PM
I've heard good things about this hack but have to be honest was a bit put off by some levels not being changed. can't wait for the update hope you find some play testers, glad you went back to this.
#4

January 27, 2021, 08:34:57 AM
All you need now is a prompt when it switches from day to night and back again saying "What a horrible night to have a curse" and "The morning sun has vanquished the horrible night"

December 21, 2020, 07:00:28 AM
This is a really neat idea but you def need to give it more times for people to join. Also might want to create a discord for the event or for LoZ hacking in general. This would serve as a place for people to ask questions etc. Heck there might be a LoZ hacking discord group already out there. If so that might mean more people interested in joining. When I did Hackjam for Z2 it was an event in Zelda 2 discord.

these are just some suggestions cause I really love the idea.
#6

I like the first Heart out out of the 4 above for whatever that's worth.
#11

November 11, 2019, 10:10:19 AM
Love all the stuff your doing here, but I would say the heart and magic drops look to disproportionate to link. I feel like thy should be smaller. This could be just me and being use to the original game.
#12

September 07, 2019, 08:42:11 AM
Hi Duke, I use this editor it's super easy just load the game into the editor in the top left corner choose edit then palette editor use the drop down bar and choose palaces inside then go ham

August 31, 2019, 10:11:28 AM
I LOVE these two hacks but they really don't work for vanilla z2 in a meaningful way over what is already there. these would make awesome spells for a z2 hack. where you could build ideas around both spells. The link to fairy to link spell imagine some of the cool puzzles you could base around it. this is just my feeling regardless amazing work DarkSamus
#14

May 11, 2019, 09:36:13 AM
Happy to hear your still at it trax. The trap door idea is very cool wondering if your planning to make a palace around this concept or sprinkle it hear and there. I've had to drop a lot of ideas after either not being able to get them to work or getting lower then expected results so I get dropping the overworld concept you had. While I think the overworld is one of the most least interesting things in Zelda 2 I'm sure you'll find way to make it fun and better i.e. the ice overworld idea you came up with.
#17

March 11, 2019, 06:17:33 PM
I really think of the FDS version as a beta version. NA version is just overall more complete and well rounded. Not to mention the WAIT factor of the FDS version really hampers the pace of the game.
#18

February 19, 2019, 09:36:34 AM
The idea of breaking palaces up into smaller palaces is a fantastic idea. So good that I feel you could make a whole new hack just from this one idea. If you could have multipal small "shrines". Even two room "shrines" the overworld would become so populated but in a good way. You could even have some be more of an open concept. get a key in this "shrine" to open another. Backtracking wouldn't feel like a chore as well.

[spoiler] only be immune to fire. I'm not sure I like this idea though. its at a place in my game were I don't want the flow to stop because you don't have something to beat a boss. Also in thoery one need only stand in one spot and shot to kill him which is boring. I tested this on barba the fight wasn't good at all and was way to and easy. [/spoiler]

The other idea is making his fire/lazer balls shot faster or maybe his heads pop off lower so you can't use jump attacks as easily or a combination of the two.

[spoiler] I plan to have 2 "open" palaces that don't require any keys and have no doors. I have also left a few items availble for this new map the main one being a required magic container to progress further in the game once you beat the new map. [/spoiler] 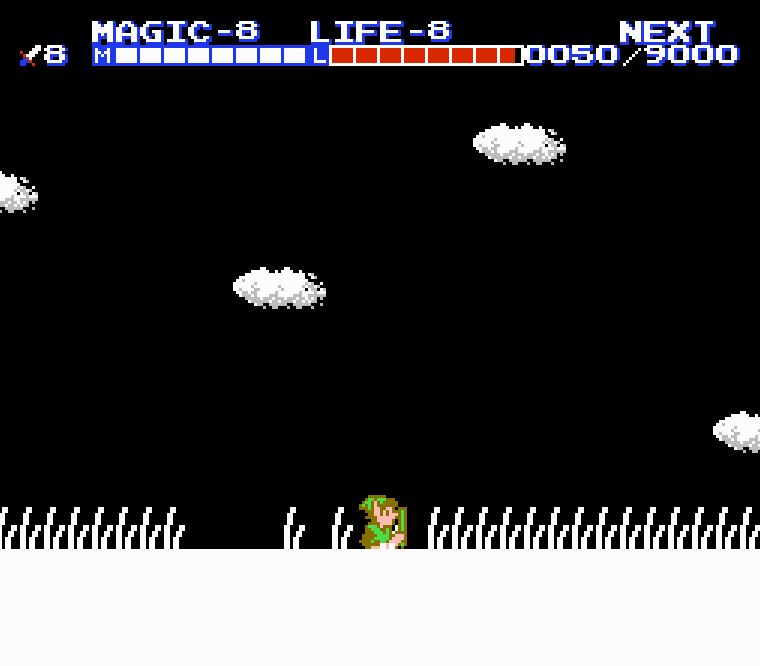