Save the config as tracks.json, and place it and the .exe in the same directory as the .wav files then run the .exe.  If that doesn't work, send me a screenshot of the game folder.
64

Just looked in each version of SNES9x available. Not there.  And the rewind function is a deal-breaker by itself. Now if it is there, can someone point out were it can be set? 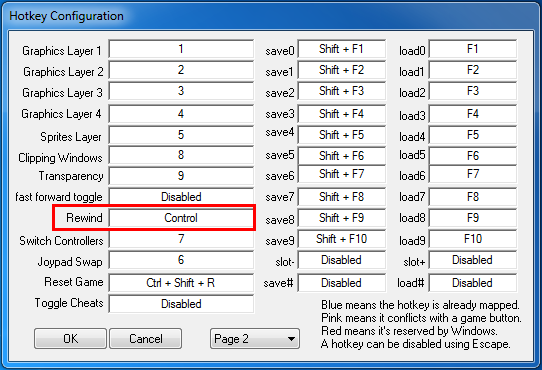 Just opened both SNES9x and ZSNES side-by-side and did a comparison. ZSNES has many more options than SNES9x. Even editing the snes9x.conf file just doesn't have as many options and they are not a refined.

Snes9x supports setting the frame-skip rate to the individual frame, as well as several different built-in speed increments.  If you *really* need to run the game at exactly x%, you're not going to be able to, but the differences really aren't significant for 99% of all use cases.

This is where you're just complete wrong. Maybe you just don't know? Open them both up side-by-side and then open the Sound Config in ZSNES and the Sound settings in SNES9x. The difference is very clear. ZSNES options for sound are much better. The volume level, Guassian interpolation and Dynamic Hi-Quality Lowpass are options that are simply beautiful to the ears.

Ok, sure, but the APU emulation is pretty lousy, so even though you get nice filtering, the actual source audio isn't accurate to begin with.  Which is just part of the larger problem with ZSNES and accuracy.  You're hearing high-quality, incorrect sounds.  And you could achieve VERY similar results with a decent EQ without the emulator needing to support it.

Um again, open up ZSNES and any other emu and you'll see the differences. Code search function is excellent. Higan has a few interesting options, but BSNES is a read only situation. No comparison.

Snes9x has way better search functions than ZSNES.  And if you really want unparalleled, that would be bsnes-plus.  I stand by my statement.  ZSNES has cheat support, it is not in any way remarkable or "unparalleled" in that regard.

ZSNES is open source so literally anyone can dev it. And FuSoYa's latest update was Dec 2015. And that's just FuSoYa's project. There are a few others as well including one on the ZSNES forums which was updated in 2015 as well. So if it's being worked on and the most recent two versions were less than 2 years ago, is that really dead? Nesticle is a dead project. ZSNES is still being actively, if slowly, worked on. That says, to me, not dead.

Just because a couple of people have messed around with it in the last 10 years is a far cry from active development.  Nobody has gone anywhere near the emulation core, which is in dire need of a complete overhaul.


Frankly, there's not really much point in continuing this conversation.  Back to the actual point, as you pointed out, ZSNES is open source.  Anybody can add MSU-1 support if they want to.  But they won't.  Because it's dead.  Also, because a lot of the guys related to the ZSNES project seem to have a vendetta against anything that byuu touches.
69

1. Rewind function - Snes9x supports this
2. Fine grained emulation speed options - Again, Snes9x supports this, although I think it is broken in the latest builds.  It's been awhile since I've touched ZSNES, so there may be some minor differences depending on your specific definition of "fine-grained".
3. Video filters - ZSNES is FAR from unparalleled here.  They offer various resolutions, stretching modes, and a whopping FIVE interpolation filters.  They don't have any of the far superior xBRZ filters, CRT emulation (aside from basic scanlines, but no NTSC filter), and here's the big one: no shader support.  Snes9x runs circles around it in this regard.  Even higan/bsnes have better shader support, although they are stuck with integer scaling (unless the non-integer scaling patch made it into the main codebase, I can't remember), which some people find annoying.
4. Fine grained audio controls - Ok, fine, a few extra filtering options, nothing earth shattering
5. Cheat code options - Again, you're making claims that just aren't true.  ZSNES's cheat engine is exactly par for the course.  Absolutely nothing special about it.  Higan/bsnes have a far more robust cheat engine with features like multi-part cheats that no other SNES emulator has.  ZSNES has... well, it has cheats.  They work.

As for it not being a dead project.  That's not really a matter of opinion.  FuSoYa's build is the only public activity the entire project has seen in TEN YEARS (literally, v1.51 was the last official release, dated 24 Jan 2007).  That's dead.
70

« on: March 26, 2017, 03:28:56 pm »
No. Let it die.  I understand the nostalgia factor, but unless somebody wants to completely rip out the entire emulation engine and rebuild it from the ground up, there's simply no other way to bring it up to par with current levels of understanding in terms of accuracy.  It's hack jobs layered on more hack jobs.  And doing that work to fix it up would end up costing pretty much all of its benefits in terms of speed, without any real benefit aside from the aforementioned nostalgia factor. And the alternative, just throwing new features at it in its current state would only give the false impression that it's not a dead project, when that's exactly what it is.
71

« on: March 24, 2017, 01:21:37 pm »
I've answered that multiple times. It's not directly compatible with other hacks, but the final version can be, however, it will have to be supported by that hack's author as well, it can't just be a simple patch, changes need to be made to the event script.
73

« on: March 20, 2017, 01:43:36 pm »
Ah yep, my bad.  I actually have that Chrono Trigger pack converted to my new tool, so I may swap that out in the main post.  The end result is the same, so anybody who has already converted their tracks can just ignore it, but it should be a bit simpler to use for everybody else, since it's a single .exe + config instead of a .bat + config + 3 separate applications consisting of dozens of binaries.
74

« on: March 20, 2017, 12:54:20 pm »
There are a few places where Lavos' Theme plays a section that is basically The Day The World Revived.  I want to say that the Day of Lavos record in Arris Dome is one of those if you let it run long enough, but I can't remember for sure.  That's what track 85 will be used for.

Edit: Oh, you mean you can't find the lines in the config.  Here you go:

I'm on 1.7d and had no issue with the treasure chest. Only noticeable issue I've seen so far is the audio on the Star Wars crawl is out of sync by about 5 seconds.  Everything else is going swimmingly.

If you mean that the voiceover is delayed a bit, that was intentional,  I synced it up so that the voice started reading a line approximately at the same time as the next line started displaying.  I tried syncing it to start reading at the same time the line was displayed, but sometimes he would get ahead, and would start reading things that weren't on the screen yet.  I felt this timing was the best compromise.
76

I can't get the MSU files to download at all, but that's probably not your fault, dropbox just hates me for some reason.
I started the game a little bit ago and named my character Assfuk, since Assface was too long, loving the game so far.

Wait, the audio pack is being hosted on Dropbox?  That's not going to end well...  They have bandwidth quotas and will lock large files if they get too much traffic.  You should really be using a real file host like Mega or MediaFire.  Or at the very least, Google Drive doesn't have that issue.

@ SleepyFist: I'll add an alternate link for the msu-1 pack when I have some free time!

Or, if none of that works, the easiest, most foolproof way to make it work is to delete the manifest and rename the files to higan's default names, i.e.

higan is the most flexible of all of the options, but with more flexibility comes more ways for something to go wrong

« on: March 02, 2017, 04:51:00 am »
Yes, I'm aware of the irreversible nature of clipping in the boosted files. Thankfully that hasn't really been much of an issue. The whole volume thing is a long and complicated ordeal, but suffice it to say that there will be no code patch or volume adjustment made available. Too many people have worked too hard for too long to finally very every existing implementation to match, we're not going to break it now. I know to a lot of people a volume adjustment seems like a simple fix, but you'll just have to take my word that there's a very good reason to not do that.  Yes, that means audio packs need to be re-normalized. I'm personally in the process of doing exactly that. You can find my progress over at zeldix.net in the msu-1 section (I'm on my phone, so no link, sorry, but it's stickied).
Pages: 1 2 3 [4] 5 6 7 8 9 10