Newcomer's Board / FDS Graphic Editors - What can I use?

« on: November 27, 2021, 12:52:57 am »
I was thinking about looking into some FDS rom hacking.  First thing I wanted to look into was a graphic editor for FDS ROMs.  (Lack of a better example: Changing graphics in the FDS game: "Hikari Shinwa - Palathena no Kagami") I had used Tile Layer Pro, but it didn't display correctly, so I'm looking for another program that can edit graphics in FDS ROMs.

Help Wanted Ads / Re: [Translation][NES] The Lord of King / Astyanax

I am currently looking into those dump scripts you uploaded.
I will give it a try in translating it for you

Amazing!  Thank you so much for volunteering!  I'm looking forward to seeing your translation work!

Personal Projects / Re: The Lord of King / Astyanax (Released!)

Did you have to modify the script?.

Are there any differences with the last patch?.

I adjusted a couple of lines that was typed out after the first boss (Ceasar) was defeated.  I also did apply a different font to the screen (All Caps) and struck a line through the "0" so that it looks different enough to a capital "O".  After going over the game again, the two looked identical, so I changed it to make them look different.
4

Personal Projects / Re: The Lord of King / Astyanax (Released!)

I'm gonna give this a spin tonight, I always liked the cut scenes when I was a teen.

Awesome!  Please let me know what you think later on.  I'm open to feedback.

It's been a while, but here's an alpha release patch of "The Lord of King" which I had made.  Fortunately, I didn't have to change the title screen or apply an English font to the game.  (The game already had one... all caps, though.)  As for how this game's script was translated, I used DeepL, 10ten (a Microsoft Edge extension that works like Rikai-chan), and Google Translator.  Of course, there could be errors in the translation.  That's why I had asked for a translator to go over the script I had initially dumped.

Anyway, I could use some feedback on this version, so if anyone wants to test this out, please do so.  I'm always willing to listen to any and all feedback.
7

Thank you!  This helps a lot!  The only issue is trying to shorten it to 24 characters max (restraints due to how the 16x16 text is displayed,

My first question is, would "Touno Youkai Battlefield" work as a shortened translation in your eyes?  I ask this because "Road to the Touno Youkai Battle" is too big to fit in the area displayed on-screen.  I need to use 24 characters (two by twelve), at most, in the area... and space limitations suck.

Second, can you translate the first screen?  (The 16x16 text that's displayed upon booting the game.  It has the spear in the background.)

« on: November 12, 2021, 10:41:25 pm »
I didn't receive any replies about the issue I have with the ending credits.  If anyone out there can help me out with inserting the ending credits entirely into the ROM, if possible, please let me know here.  I want this straightened out ASAP. 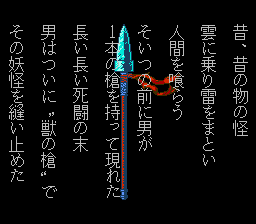 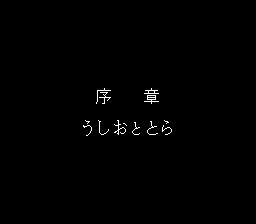 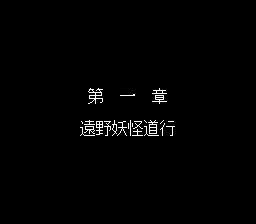 First Chapter
-I couldn't figure out what the 16x16 text displayed meant, and I haven't heard from my translator about this issue yet. 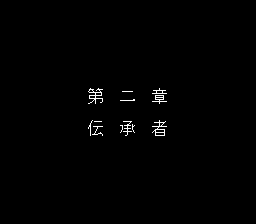 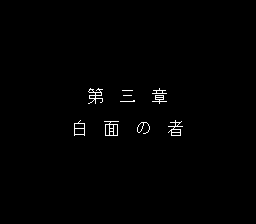 Furthermore, I need help with translating the 16x16 text in the game.  Fortunately, I was able to find the location of the text, and the pointers used therein.  I might be able to fit the text in that area, but it'll require some text editing and arranging the 16x16 sprites.  (For example, the first image can display 192 characters at maximum, but I can't do anything about it until I get those images translated.

I was able to figure out the images marked as Chapter - Prologue, Second Chapter, and Third Chapter on my own.  The other two images will need someone TL.
9

There is already a title screen hack for Macross. Though it's a combination of English and Japanese.

I saw that one, but I wanted to do one of my own regardless.
10 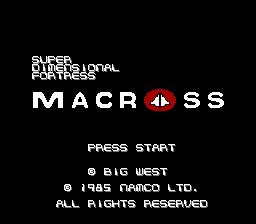 Just a quick title screen for the old Super Dimensional Fortress Macross NES game.  I got the design from an official logo I found online.  As for why there were wide spaces between letters, I didn't have a lot of tiles to work with, so I had to use what little I had.

This may come out once I make a patch for the NES ROM, but any suggestions on this title screen?
11

Since I couldn't do anything about the stage clears, I had to take a shortcut.  While the original ROM (including the untouched Japanese ROM) listed the land's name as "Remlia" even though the 10ten/DeepL/GoogleTL treatment I had given it called it "Lemuria", I stuck with calling the game's setting titled as just "Remlia".  (This also applies to another area in the game which was listed as "Thelenea", but I got "Terenea" instead.)

I should have a very ALPHA patch ready soon... but I still need someone to TL the script.  (I already have a post up on the "Help Wanted" board about that.)
12

Wow, the original names are really terrible. I suggest re-localizing them.
But keep Cutie.

The thought had crossed my mind.  But then, I did look up that there was an arcade that the NES version was loosely based off of... and in that version, the hero's name is also "Roche".  Might change his name to "Ross", but nothing's set in stone, yet.

The name sounds engrish as well. The Lord of King? "Kings" maybe. Is king the name of a place?

Nope, the game's original title is "The Lord of King".  (And yes, it does sound like "Engrish")   It should have been called "The Lord of Kings".  (Might sound like a Wisdom Tree-themed religious video game from that title, but that doesn't bother me.  Your mileage may vary.)  The "King" doesn't refer to any place in the game... as the game's setting is the "Kingdom of Remlia".  (possibly called "Lemuria"; Again, I couldn't get the name displayed during stage clear screens)
13

This is fantastic! question, is this an accurate translation from the original japanese one? cheers!

I want it to be accurate, of course... as accurate as I can fit into the ROM as best as I can.

I love Astyanax, allways wondered what the japanese game story was about.

This is great news, keep on going with your excellent job

Thank you for the well-wishes.  I hope this gets done someday. 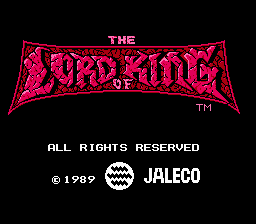 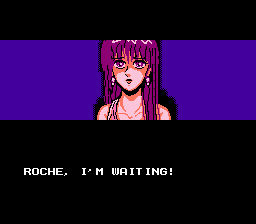 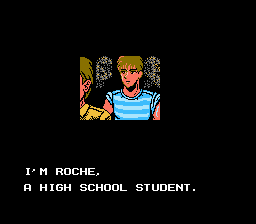 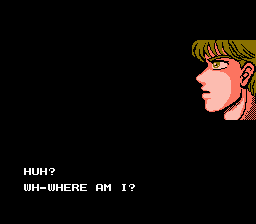 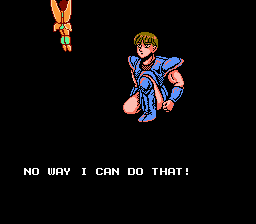 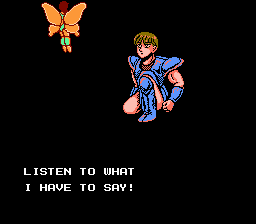 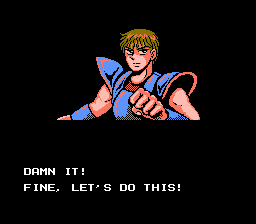 Time for another NES translation project.  This time, it's the game called "the Lord of King".  (Released in English as "Astyanax".)

I already dumped the script and it's ready for translation.  (As of now, I have a preliminary script that I had TLed using 10ten, DeepL, and Google Translator.  (Again, please don't hold that against me.)  There may be translation errors, so I need someone to go over the script to see if there are any errors that need to be looked into.

Strangely, from what I can tell, the names of the characters were changed.

Cutie is still the same between both versions of the game.

Also, the game takes place in the magical land of Remlia.  (When I put the katakana that was supposed to read that, it spit out "Lemuria".  I wanted to change Remlia to Lemuria in-game.  While I did find the names of area locations in the ROM and changed Remlia to Lemuria, when the game displays stage clears, the name is displayed, surprisingly as "Remlia".  Furthermore, I couldn't find the word "CLEAR" anywhere in the ROM.  For now, the name "Remlia" will have to stick until there's a way that "Lemuria" can be displayed in stage clear displays.  I can only assume someone with ASM wizardry can take care of that.)

All that's left is to find the untranslated text that displays Cutie's power-up options.  (When Cutie appears to offer a choice of powerups.)

I did full playthroughs of both Japan and USA during beta testing to meet the Halloween deadline. The two glitched screens of USA (1 title, 1 ending) were all I noticed and what I reported (images).

Thanks again for beta-testing, BTW.

I hope everyone liked this little project of mine.

I did put together another quick conjuring of the patch, and I'm sure the IPS will change the Makai-Mura ROM this time.  (I tested it to be sure.)  I think I'll make IPS and BPS patches for the US English ROMs as well.

I made an update to my Makai-Mura game patch.  Aside from the new title screen, I finally fixed up all the "Engrish" in the fake and real endings.  (Screenshots above are what I typed up.)

As of now, I have one beta tester looking over this.  (Thanks, Googie!)  More would be welcome.

I'm hoping I can get this out, officially, in time for Halloween.

P.S.:  Patch is in two formats. (IPS and BPS)  Both patches are identical to each other and one or the other can be used on the Japanese ROM.

P.P.S.:  This patch has STILL not been tested on the English ROM. (Ghosts n' Goblins)
18

News Submissions / Re: ROM Hacks: The star of the Algo System shines with a new intensity

« on: October 26, 2021, 04:48:47 am »
I like this hack of the game, but I wish I could use it in concert with the re-translation patch.  I had tried using this on top of the re-translated patched ROM, and it didn't work.  I patch the JPN Phantasy Star ROM with this patch and later the retranslation patch.  The ROM worked, but the buildings were reverted to their original sprites.

Is it possible that a version of the PSM patch will work alongside the re-translation?  Or am I doing something wrong?

I'm also planning on giving the game "Lord of Kings" (Released in the US as Astyanax) a translation treatment.  As of now, I've put together a table for the game, found the game's text location in the ROM, and figured out its pointer tables (Setoff 4000).  The hard part is someone to translate the script.

Using WindHex, I did dump the game's script into a text file, which I have uploaded.  I could use someone's help to translate the text into English.  I hope I can find someone to help me out with this just like I was lucky enough to get a translator for my other projects.

P.S.:  For anyone that might be curious, the script's text encoding should be in Shift-JIS format.

Edit:  Turns out I had made an error in my initial script dump.  This has been fixed here with a new script dump of Lord of Kings.  (Link above has been changed.)
20

I can do a playthrough if anything, as a matter of fact, I'll do it tonight after dinner.

Awesome, ty!  Please let me know what you think.