Almost everything I wanted to be in this editor is now done. There are a few things left (mostly UI polish) but this is quite nearly a finished product now until someone finds some crazy showstopping bugs or whatever. Have fun!

Code: [Select]
v0.90 [2014-06-12]
- new HTML documentation
- full tileset, BG palette, and sprite palette editing
- editing of "stage clear" and star switch reveal areas on overworlds
- some text changes ("level" replaced with "room" or "stage" when appropriate)
- allow pasting beyond 64 tiles in either direction; this was a limitation that managed
to survive being copied from KDCEditor without being updated for the real maximum
height/width of Kirby's Adventure maps (thanks DarkMatt)
- more new icons (by Reimu)
- sprites and exits outside of level bounds are no longer shown, saved, or editable
- tile edit window displays tile numbers in hex
- opening non-Kirby's Adventure ROMs now displays an error instead of continuing
123

ExHiROM (aka the Tales of Phantasia way) is probably the best/easiest solution - keep banks $C0-$FF at the beginning of the ROM file like normal, then expand the ROM to add more 64kb banks that will be mapped as bank $40 and up.

Programming / Re: Any easy to use side scrolling game creators?

Programming / Re: [SNES] Is CMP #$00 necessary in this situation?

AFAIK it is wrong to expect that Squaresoft's games are all masterly programmed (just because they are masterly concepted).

I find this is true of big-name software in general, not just Square games

Programming / Re: [SNES] Is CMP #$00 necessary in this situation?

Nope, peepholes optimizers are supposed to remove this kind of things.

Although bad code produced by a (badly configured ?) compiler could be a valid explaination.

Most/all of EA's SNES sports games were written using a compiler, and it routinely did stupid things like explicitly allocating 0 bytes on the stack for functions without any arguments or local variables, so I wouldn't be surprised to see something like the OP either.

Then again, my first assumption was that this is a bit of code Mauron wrote themselves for feedback, rather than something found in an existing ROM (and if I had time, I'd let bgrep check for me

Programming / Re: Tales of Phantasia SRAM

Programming / Re: Tales of Phantasia SRAM

Or maybe I'm misunderstanding the issue and Geiger's just isn't reading/writing the SRAM from/to disk correctly at all, in which case I have no idea.
130

The rom size value in the cartridge header is completely ignored by actual cartridges and SNES hardware, and is in fact inaccurate in a few commercial titles. (I can't name any off the top of my head, but I know who to ask to find out...) If it's being polled by a flashcart, then that's a flaw in the flashcart's read logic and isn't a problem with the translation patch.

Super Noah's Ark 3D is one, if that counts (and most other unlicensed/bootleg carts I've seen don't bother with valid size info in the header either).
131

That said, MMC3 was not the upper limits of storage. The largest game to use an official mapper was Metal Slader Glory for the Famicom, which maxed out the MMC5 with a 512 KB PRG and a 512 KB CHR.

That's actually only half of the MMC5's maximum capacity for both PRG and CHR, though there certainly aren't any 2MB licensed games out there (and even the NES PowerPak, which supports the MMC5, doesn't support PRG or CHR ROM sizes larger than 512kb, unfortunately).
132

I haven't had much time to try the demo yet, but it looks like a pretty interesting challenge from the video you posted. The KDL2 sprites are a nice touch too.
133 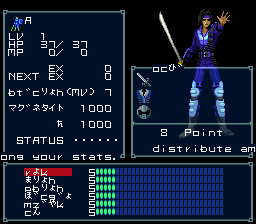 (That reminds me I found this debug mode a while ago, which could prove useful as far as dialogue testing goes, but I dunno how much of that end you've done already

I don't know about armips, but several MIPS assemblers also support a pseudoinstruction called "li" (load immediate) which simplifies the above:

("li" isn't a real MIPS instruction, but an assembler that supports it will essentially convert it to the lui/ori form when you assemble the code.)
136

« on: April 18, 2014, 05:16:17 pm »
Tile and palette editing are still in progress, since I haven't had a lot of free time to work on this in the past week or so, but here is a mostly-bugfix release which also adds to the exit editor (which can be used in case something got messed up by the bug that this release fixes; see the changes for details)

Code: [Select]
v0.83 [2014-04-18]
- fixed the limit on # of exits being too high, easily leading to corruption
(due to some incorrect info on datacrystal)
this was capable of affecting boss battle info (for the "next world" doors) which
can now be edited as part of the normal exit data, as well as part of the tileset
data, which the editor will now repair automatically until the actual tileset editor
is added (soon, hopefully.)
- added the ability to change boss battle locations when editing a door with type 0x1F
(the "next" overworld doors)
- fixed a bug where the music track and "no return on death" settings in the level
properties dialog didn't take effect unless other settings were also changed
(thanks J^P)
- new "edit exits" and "level properties" menu/window icons (made by Reimu)
(Also, I looked into the issue that J^P posted about above, and it turned out to be more or less some kind of unreplicatable weirdness that happened when saving the ROM to disk; it hasn't happened again since or to anyone else as far as I know.)
April 20, 2014, 12:11:39 am - (Auto Merged - Double Posts are not allowed before 7 days.)In my haste to release the v0.83 bug fix, I broke something else. Please forgive my idiocy and enjoy v0.83b.

Like I found out before releasing v0.81, it may be caused by some stupid detail of the way the game handles sprite data that's currently being overlooked. Hopefully it should be easy to fix once I can actually see it happening.
139

Code: [Select]
v0.82 [2014-03-29]
- fixed double size mode leaving sprites/exits in the wrong place
(thanks Darkdata)
I uploaded both the full release as well as the update by itself, for people who already downloaded it and didn't feel like downloading all the dependencies again.

Barring any other stupid oversights on my part, the next major update will probably introduce some other stuff like tileset/palette editing. I've also been experimenting with a MMC3->MMC5 mapper hack to address the very small amount of free ROM space in the game as it is (and the complete lack of unused CHR-ROM banks); if I can get that working without any issues I may either build it in to the editor or add support for ROMs that are patched with it separately or something.
140

Personal Projects / Re: Gaia the Creator - An editor for Illusion of Gaia