First of all, if it's the latest version of the patch which we're talking about, you're wrong about it being mono, everything, music and sound effect, is stereo. You're right that the sample rate is lower than the SNES version, and also the "original" GBA but only by a small margin. This sacrifice was necessary in order to make the sound engine as quick as possible in order to avoid lagging/slow down during gameplay, and to allow the echo effect to sound as close as possible as the SNES version.

It's possible to have a higher sample rate in order to sound similar to SNES, but this would make :

In the end this clearly wasn't worth it - having the sound as close as possible to SNES but a little bit muffled, and the game as fast as possible, sounded like the best option to me. I could have made various versions of the patch and let the end-user chose what he prefers, but this would have been terribly complicated to test and maintain.

I'll conclude by saying that even though the SNES have a sample rate of 32kHz (and the GBA patches only have about half of that, 16kHz), the sounds on a real SNES is quite muffled because of how the gaussian filtering in the S-DSP works. So in a SNES emulator or SPC player you can get more trebble than what is audible on real hardware. (By using a higher sample rate and using cubic interpolation instead of gaussian makes it possible to have even more treble - sounds great but that's now how the real SNES sounds !). In the end playing the patched GBA version or SNES version on real hardware wouldn't make that big of a difference, the GBA version would only be slightly more "muffled" than the SNES version.

Thank you for the explanation, I understand sacrifices had to be made in order to have the game run well.
And it's already amazing what you managed to do here

Maybe I didn't explain well what I meant; I can hear the sound is stereo, but barely, especially compared to the other versions. I don't know if it's the low sample rate or what, but with the last version of your patch, on stereo speakers there is barely any difference between left and right sound.

I tested both original GBA and Snes games on real hardware (GBA with earphones, Gameboy Player, DS Lite and real Snes), and the stereo is very clear, for both the sound effects and the music.
Also I tried it through my Amp with Dolby PLIIx, since this sound enhancing process is redirecting the mono sounds on the middle speaker, while leaving the stereo ones on the side speakers. For the original game versions, almost all the sound goes to the side speakers, but for the patched one the sound can be heard almost only on the middle speaker.

I will try to record it if I manage to input the sound to my PC, it's a huge difference. But of course on a normal GBA front mono speaker, it doesn't make much difference, there might not be many people who even realized it

You are talking about the echo, how often is it used during the game?
Is that a big difference if we remove the effect completely?
2

The sound effects have been restored to the normal SNES ones.

Hello Bregalad,
Thanks for your amazing sound patches!
However there is one thing that really bother me; once patched, the game music and sounds become mostly mono, with a clearly lower sample rate than both the Snes and the original GBA ones.
It's really a big flaw for me since I play mainly with earphones and Gameboy Player, making everything sound even worse than the unpatched one...
Is there a way this can be fixed with original Snes stereo and sample rate?
If it increases the file size I don't mind since my flashcart supports 32MB roms.
3

I can't wait to try it out!
But at the same time I prefer to wait until it's ready no matter what time it takes for you to finish this beauty

Are you sure? I just tried and it works;
https://www.dropbox.com/s/p0pakt420fms1r0/SoM%20NewGameplayImprovement%20V0.18.zip?dl=0
You have to click the Download button in the upper right corner of the page, then select "Direct Download".

Ohh I see, I thought the link in the first post was updated to the last version already

My bad, thanks for the link I will use it

Thank you very much for your hard work, I have been trying your patches and it clearly improve the games experience, it's awesome!
And the patches are really well done, very easy to use and well explained.

I had just a small question, do you think there is a way to make your Magic Knight Rayearth patch with the undub version of the game?
Would love to play the US english game with your patch + orignal voice

I guess Super Mario Land 2's 25th Anniversary should be celebrated, shouldn't it? 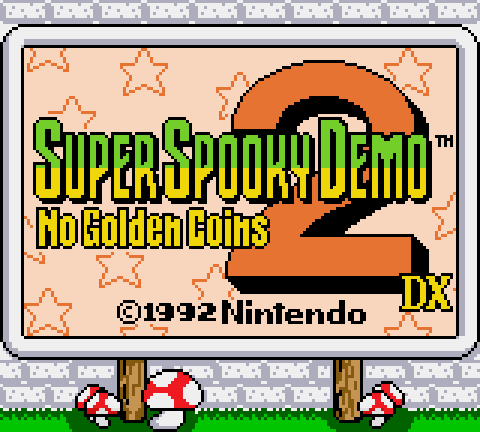 But if you want the full hack you won't be waiting long - Super Mario Land 2 DX will be released this December!

Wow that's awesome !
Thank you so much, that's a great christmas gift you do to us

Wow that's gorgeous, you did such a great job on this patch, can't wait to try it out

I am wondering, is there a way to patch the French version to NTSC to play it in 60Hz?
The german patch indeed work to patch the french version, but the patch with NTSC doesn't work sadly...
Pages: [1]