You should look up Graal Online, or Zelda Online from Cyberjouer.  In the late 90s, a company made an online version of A Link to the Past called Zelda Online, and were forced to change the name and graphics slightly to avoid copyright.

The game was actually very popular and had an impressive amount of tools and built in level editor.  There have been dozens of custom servers hosted over the years and it is still online to this day, but in a very sad shell of its former self.  This game was mind blowing when it first came out, and I'm so glad I got to experience it in its many incarnations.  Initially there was a four player offline exe which allowed you to make your own levels or mess around in a few premade ones.  It has changed drastically over the years but still might be worth checking out.  I would recommend finding older clients and older level packages if possible.

Pretty cool so far. I'm wondering how you're going to make it scary though.

I think they can do it with storyline and atmosphere.  The graphics don't need to be realistic for it to be creepy or disturbing, depending on the environment and what is going on.

This looks really awesome though.  I watched a video review about it a few weeks ago it it got a lot of hype and interest.
3

I'm also making a hack of Adventure Island but just the original game for now.
4

Has anyone ever played NES' "King's Knights"? It would be nice to give the game a face-lift and add elements to the HUD, like the stats that shows in the MSX version.

Thats a good idea.  I like that game but with some tweaking and a better HUD, it could be a lot better.  As for a face lift, did you mean to change the style or just make some of the ugly graphics better somehow?  The sprites are tiny so there is only so much you can do with some of them, but some palette changes and a graphics overhaul could be interesting.  A lot of the powerup icons are kind of boring but they are self explanatory kind of with their simple design, so again I'm not sure if changing them would for the best, but I would rather get generic potions and scrolls and those types of powerups as opposed to arrows and less imaginative stuff.
5

Either way, looking forward to the release of your game!
6

Hi para and thanks for the kind comments!

Hope you'll enjoy the hack once it's released! Yes, I'm trying my best to polish the hack/game as the original had so much potential. It's as if the game had a great engine, but the level designers either ran out of time or failed to use it to its maximum potential.

Keep in mind, though, I've made this hack very focused on Nemo and the Wand...animals riding usage has been greatly reduced.

I completely agree.  The potential is sky high with this game.

Also if the animals are being downplayed in this version, perhaps in the future we could work on another version which heavily favours the usage and is designed with them more in mind.  While the animals are definitely a main feature of the original game, and a lot of parts are specifically tailored to them, some parts feel kinda forced or mundane, or you barely get to use the animal, etc.

I particularly enjoyed the Bee platforming levels and mechanics, but also kinda wished the Gorilla and Mole sections were more interesting and lasted longer.

I'm getting ahead of myself and am still really looking forward to your version being released but it was just food for thought.

Newcomer's Board / Re: Greetings and a Skateboarding Project

« on: September 12, 2017, 12:57:02 am »
I appreciate the response but I also don't understand what the purpose of the Scratchpad is, if I apparently was using it incorrectly.

I didn't share a ROM either, it was just the patch in a zip file.  I was following instructions as posted in a previous thread when someone was asking how to submit their hack.

I uploaded it to Ze Bucket and sent the new link to the owner of the editor.

This is a mockup image while I tinker with names and designs.  Most likely going with the one on the left since I want this game to feel like a Goonies game, so having the Lode Runner font kind of throws it off. 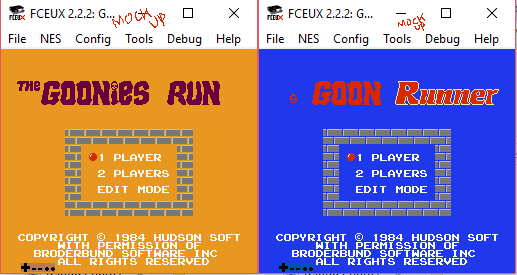 The title screen is half edited to be a mockup in Paint but the in game screenshots are real.

I wanted to edit the Goonies theme to fit into Lode Runner.  I thought it would be easy to copy and paste most of the sprites over, but due to the different dimensions, I ended up heavily editing or making most of them from scratch anyways. 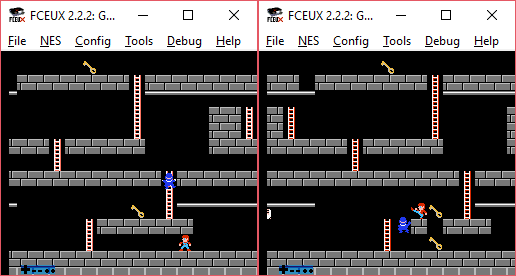 I'm not finished the hack yet, as I plan to redo a lot of the levels more to the style of the original Goonies and opposed to Lode Runner style levels as much as possible.
Eventually it would be amazing if I could somehow get the music from The Goonies into Lode Runner to help with the vibe I'm trying to put off, but I'm aware of how hard and complicated that can be, so I'm just ignoring it for now.
9

Little Nemo is an great game overall, but you managed to pinpoint and hopefully fix exactly what was slightly holding back an otherwise very fun experience.

I look forward to this being completed.  Everything about it seems very well thought out and polished.
11

Newcomer's Board / Re: Greetings and a Skateboarding Project

[link removed; don't use Scratchpad for sharing files as it is temporary]

Any help would be appreciated!

I would love to get back to work on the project but I don't know what it wrong exactly, or how to avoid it in the future, so it is discouraging in the current state.

Newcomer's Board / Greetings and a Skateboarding Project

I've been interested in ROMhacking and making my own NES games literally for as long as I can remember but only recently have put a more serious effort into making an actual project on the side.

I don't have much experience with programming and would love to continue to learn more about it, as I intend to program a game from scratch eventually, even if it is a simple one.

Here is a project that I have currently been working on in my spare time for the past month or two. My vision for this project was to make another skateboarding game for the NES.
Skateboarding is another passion of mine, and sadly there weren't too many options when it came to playing a "good" skateboarding game in the days before Tony Hawk's Pro Skater existed.  I love T&C Surf Designs, its probably my favourite of the genre on the NES, and 720 is pretty decent but the arcade is much better, the NES port can be kinda frustrating to newcomers and not appealing to people who aren't really into skateboarding.  The Skate or Die series is iconic and hilarious, but it really lacks in the actual skateboard gameplay department.

I chose Adventure Island as the base model of my project.  I've always enjoyed this game, as it was one of the first games I owned, and it had a sweet skateboard power up in it.  Riding the board is fun and also an asset to have in most cases, and personally, I always tried really hard to make it to the end of the level still on the board, mainly out of principal and for an extra challenge but also because they were kinda rare.  Adventure Island also has a really user friendly game specific hacking tool for it, so that really helped me settle on a final game to work on.  I was considering Yo! Noid because I love the skateboarding level and mechanics in the game but my skills are too low to hack levels without specific tools right now.

I have put most of my time into editing the graphics of the game, as changing the actual shape and layout of the levels themselves is really easy and I will put the levels together as I have the graphics completed.  I am tweaking the level layouts and designs in favour of fun, balanced game design, and plan to make the game a little easier and more accessible at first, compared to the original Adventure Island.

I plan on changing the tilescreen much more drastically, that is just a place holder and actually one of the first things I successfully did when getting back into ROM Hacking after a long hiatus.  A lot of the graphics for Level 2 aren't changed over yet, even for the player sprite so just ignore that for now.

I have been saving different versions of the project as backups just in case something goes wrong, and it actually paid off sooner than I would've liked.  I put about four hours into changing the graphics in Tile Layer Pro and then updating the layout and placement of them in Level 2, and it seemed to be going fine.  It worked when I tested it in the emulator several times throughout the day, and I saved the project and went to bed after being content putting a lot of work into it for the day.  I was really bummed the next day when I tried to open the project again in Aislanded and got an error message.  If someone could help me figure out what went wrong, possibly how to fix and avoid it, I would really appreciate it!

The tools I am using are:
Aislanded - Adventure Island Game Specific Editor
TileLayerPro - For editing in game GFX
fceux - for emulating and hex editing
TBLater - for making hex tables for changing font and whatnot

I'm not sure where to actually host the file, and don't want to break any forum rules so I haven't attached it yet.  I can send it personally to people or upload it here if possible.
Pages: [1]