« on: February 14, 2020, 09:37:08 am »
This is awesome, but if I might make 1 request. The BS-Zelda AST project had a version with normal music and a text banner at the bottom with the audio script. This made the game playable on pretty much any emulator... smartphone, PSP, 3DS... even the SNES Classic. If you are ABLE to manage that within project scope, it would be the version that I use.
2

« on: February 04, 2020, 06:08:07 pm »
Legend of Dragoon for PS1 fits the criteria well. There is 1 optional backtracking moment where you actually have to switch discs in order to get your final Dragoon Spirit, and it's totally worth it.

The main draw is that the battles are practically a rhythm game. The more you're able to hit the right patterns, the more damage you do. Many people hate it for this exact reason.

There are some QoL patches up on this site for it.
3

ROM Hacking Discussion / Re: How to change GB rom's header so to trick GBC/GBA to load a custom palette?

If a moron wants to upload it to a shitty website for other morons to suffer it, it's up to them. RHDN seems to be a more decent place than those other websites you visit.

RHDN is a great website, and a lot of patches have been uploaded here purely for preservation's sake. I guess just feel honored that someone wanted to preserve your unfinished hack? A lot of unfinished hacks get put up here, just in case someone wants to finish your work further down the road. Now that we know it's an active project though, I look forward to your full release. You should upload it here when done!
5

Zelda: Ancient Stone Tablets is probably worthy of a whole series. The team took an incomplete rom dump and a VHS tape and reconstructed the entire game.

Neither of these were bad games to begin with though.

I feel like there are some possibilities if you look back to old school grind heavy RPGs that people removed the grind from.
8

Personal Projects / Re: New Link To The Past Hack Released any day now!

« on: December 29, 2019, 05:25:52 pm »
My guess is that each of these games exists as a block of hex code, and the selection screen just uses a jump table. All you'd theoretically have to do is figure out which block of hex to copy and copy it to a new file. I haven't actually looked at the rom though, so that's literally a guess.
10

A good breakdown, with lots of good lore to back it up. I'm not disagreeing with your explanation; I'm saying that the lore itself doesn't really make sense, and wasn't needed. The lore exists because the developers wanted there to be a burst of blood. I simply think the game is better without the bursts of blood and the lore behind it, and is more consistent with the X series, where characters lose limbs/get impaled all the time with no blood to show for it.
11

Spoiler:
I personally don't think it works well at all.  For one, most everything in the Mega Man games is robotic, including the drones and enemies you're chopping up.  So why is there blood coming out of them?  It doesn't make any sense.  Maybe if it was oil or something, but not blood.

Second, I think the story, for as ridiculous as it is, works better with the 'censorship'.  Mainly, how Copy X and his regime says they're 'retiring' Reploids, not actually killing them.  It's a euphemism to try and call attention away from the horror of the action, exactly what a totalitarian dictator would try to do.  Even Zero pauses and stumbles over the term, it's clear it doesn't fit - and I think the story is better for it.
But that's just me.

I totally agree. The blood never made sense to me; I much preferred seeing the circuitry. This is one of those (not-so-rare) cases where censorship actually leads to a better final product.
12

I'm sorry, but slapping a but of images into an upscaler is not remastering. And they are always so obviously upscaled.
It takes no effort and no skill.
Learn how to recreate the images or learn to paint and interpret and trace the originals in 2D or 3D. Or use the upscaling as a basis to get a head start to manually clean up and make it look correct.  (https://www.fortressofdoors.com/doing-an-hd-remake-the-right-way/)

This stuff masquerading as "Remastering" is getting out of hand, it's bad enough it gets used in commercial releases when publisher can't be bothered to give a project an actual budget to hire real artists to do the job right. But that takes time and effort.

I love Legend of Dragoon, but it deserves better than this.

I just want to counter this by saying that kxteel is not getting paid to do this, and that this work is not wasted. It's one step in the process. If Sony wants to make everyone happy and give this a proper remake or remastering, THEN we can set our expectations appropriately.
13

« on: December 17, 2019, 10:01:01 am »
So I did actually have a review that was rejected with the moderator saying "Read the readme file". (Personal justification: I had read the readme file 3 times, and it did NOT address my concerns.) But yes, there is someone reviewing these before they get posted.

I thought those Megaman Zero reviews were silly, but they are not off-topic. They DO directly address the patch that they are reviewing.
14

Gaming Discussion / Re: In Defense of Sword of Mana

I've made a small hack to display the currently selected spirit on the battle hud. can share if youre interested 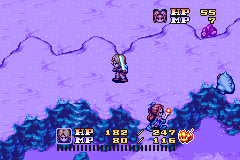 I haven't been able to find a project page as of yet.
16

This is far from the worst RPG out there but the one I enjoyed the least and actually finished is Bravely Default. The first four chapters of that game are fun enough but once you begin the later half of the story where you have to repeat the events of the entire game 5 or 6 times was insanely tedious. Literally half of the game's entire playtime is spent repeating the events of the first 40 hours over and over again with only very minor differences each time. You basically are just level grinding for another 40-50 hours until you face the final boss, who is really powerful and almost requires that you are proficient in specific jobs and have specific skills/spells in order to defeat them. I am always surprised that Bravely Default is seemingly so beloved by so many people and is ranked so highly on lists of the best games for the 3DS when half of the game is so terrible. I can only assume that everyone that loves the game never actually finished it or they just really enjoy the job system. Personally I never would have finished that Bravely Default under normal circumstances but, at the time, it was the only portable RPG I had access to so I stuck with it. I never played the sequel but even if it is better I was just so sick of that franchise after the first game that I couldn't even bring myself to play it.

This game actually turned me off of ALL turn-based RPGs for about a year. I wouldn't let myself start another one until I finished Bravely Default, but when it came time to play a game, I never wanted to PLAY Bravely Default. They suckered me in with a fantastic demo, and then made me play for 30+ hours just to get to the party progression point I was at at the end of the 5 hour demo. I felt like none of the classes worked well, and there was too little synergy in training up multiple classes. Having to start over again at ground zero every time you got a new class left a bad taste in my mouth too. I finally started enjoying the game after I decided to abandon all mage classes and just focus on hitting things, but that was too little too late. I never finished. The lasting effect of this game was so strong that I only made it through the first 5 minutes of the Octopath Traveler demo.

But Xenoblade Chronicles was beautiful. It was longer than it needed to be, and the sidequests didn't do anything to advance the story, but the main story was really good, and the combat was satisfying.
17

Legend of Dragoon. Couple of my friends absolutely loved this one but it bored me senseless.

You, sir, are crazy.

« on: December 03, 2019, 12:28:34 pm »
I'm putting this out there as a plug for those of you who don't know about Zelda: The Ancient Stone Tablets, an SNES BS-X game that has been restored by the BS Zelda Team: https://bszelda.zeldalegends.net/sekibanfiles.shtml

This game is a direct sequel to A Link to the Past, taking place a couple of years later, and the work that the team has done to restore it is incredible. They've gone as far as recording 4 1-hour programs in English that mimic the feeling of playing it as an original broadcast. Personally, I'm playing it without the MSU patch, where the text of the broadcast is displayed in a caption bar at the bottom of the screen.

Not only is this an incredible act of digital preservation; the game is actually really fun. The latest version can't be posted here, because the team has released it as a full rom rather than a patch, but you can download it from their website.
19

Gaming Discussion / Re: Good Switch Stuff to Get Early On?

True. The amount of content in that game would easily justify a $40 price tag. It's also, in my opinion, the best Action Platformer (aka Metroidvania) ever made.
20

Gaming Discussion / Re: Good Switch Stuff to Get Early On?

Switch Exclusives
* Splatoon 2
* Super Mario Odyssey
* Mario + Rabbids: Kingdom Battle ($15 through tomorrow from Target)
* Cadence of Hyrule
* Dragon: Marked for Death (made by the team behind Megaman Zero/ZX. 30% off through tomorrow on the eShop)

Games I have not purchased yet, but plan to:
* Gunvolt Chronicles: Luminous Avenger iX
* Into the Breach
* Fell Seal: Arbiter's Mask