« on: July 31, 2021, 10:18:12 am »
This is probably the hack I'm the most patiently waiting for since I seen some comments in the old forums. I occasionally follow your Twitter account for the updates and I'm happy to see how, despite slow, this project keeps progressing and constantly having interesting changes. I'd love to help as betatester if you ever need, as ToP was the first unofficial translation I ever played many years ago and still one of my favorite RPGs ever and I'm really very very interested to play this. Congrats for all the hard work for so many years and good luck with the project

« on: July 31, 2021, 10:13:20 am »
Glad to see the DBZ Butouden games receiving some love in the romhacking scene. Even if just minor graphic changes it's always refreshing to see and play. Waiting for the patch release to enjoy it

« on: July 31, 2021, 10:07:58 am »
This hack looks amazing, quite promising. I love the references to stages from other Castlevanias (like Rondo and CV2). In some screenshoots the graphics look so good, it almost seem a 16-bit game. I'll play it as soon as a patch is publicly released. Thanks and congrats for the good work

First it was in the three scenario selection screen. Not sure if this happens to everyone, but that's how the Mog's sprite looked for me the first time: 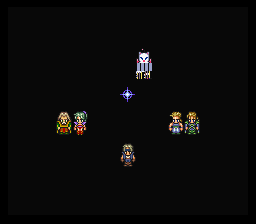 Not a serious glitch because it breaks nothing; the selection screen works as intended regardless. And once you complete one of the scenarios the second and third time the sprite looks fine, no glitches.

The second is a more serious one, thought. It happens in the Imperial Camps in the Sabin & Edgar scenario. There are some tiles in a left corner where you may get stuck in and, when this happens you can't move anywhere, no matters what direction you press. I recorded a short video and converted to gif to show this.

Maybe a problem with a tile's passability? I never tried hacking this game but it probably wouldn't be extremely hard to fix the map or the tile's properties. And it's easy to avoid when you are aware of it: just be careful when moving to certain tiles on this map.

Now I'm in the "Terra is fled to Zozo" part, and really enjoyed the hack so far. If I find any more bug or glitch or whatever I'll report here if that's okay.