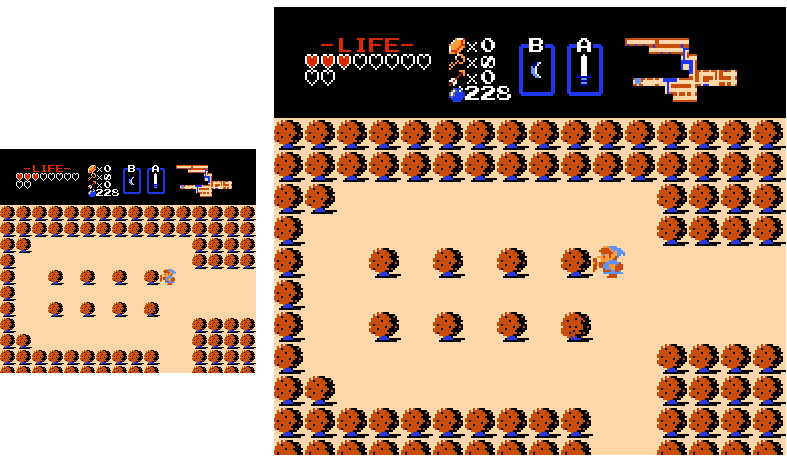 That + your expanded content would be the perfect improvement hack.
4

I should have time in the next few weeks to power through the whole game! I'll be happy to post full opinions then.
7

I'd definitely mix that in with the "1-Up Doll increases max lives," though. I've always waited to finish the Temples until I'm almost at The Great Palace to round up all those extra lives you get when you're at max levels. You can "fix" two ways of cheesing the game at once that way.
8

« on: February 12, 2019, 11:59:10 pm »
Before Trax kills us all, here's a mockup of the HUD that I was thinking, now that some more magic seems to be possible. There's two versions, one with a line separating each bar of magic, and one without. Thoughts? 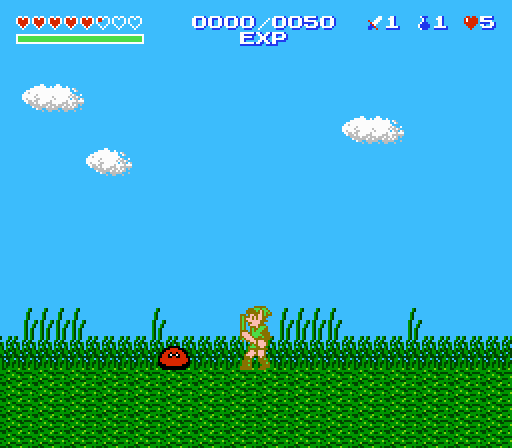 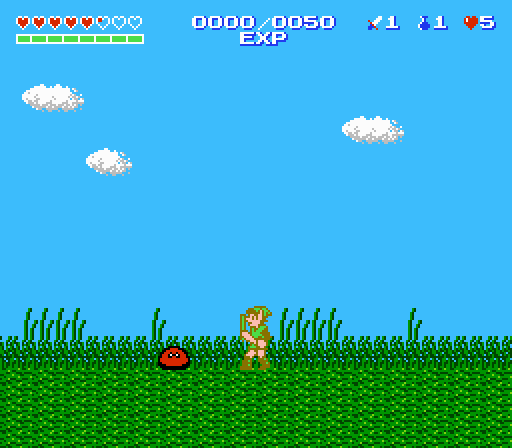 I'm partial to without, myself.

I see "Next" as a pretty non-standard way of just saying experience, which happens to have a nice 3-letter abbreviation that allows you to center it on the HUD. And "Level" just... Doesn't feel necessary?
9

« on: February 11, 2019, 04:48:26 pm »
Just want to say that the Heart Meter is awesome! Though I definitely think it needs to support 1/4 hearts to really show life totals - Even the bar in vanilla Zelda II will show you at "Empty" while still alive.

The Pause screen is great, as well!

Also I love the Extra Lives idea! Right now you want to avoid them until you're ready to tackle the Great Palace, but having them permanently increase your maximum is genius.
11

It both exposes enemies, making them into Bots, and exposes the secret in New Kasuto with the Magic Key.
12

I'm pretty sure the menu hack you're using doesn't work on real hardware, as a warning.
13

Also, I feel like the Fire spell should really be buffed in some way. Travel faster, do more damage (if feasible?), and definitely hurt all enemies.
14

If so, that would allow for all sorts of BG animation. Obviously you wouldn't want to go overkill on it, but it can be done tastefully - grass to softly blow in the wind, water to actually ripple, etc. I've seen it before in SMB hacks.
16

« on: September 28, 2018, 10:02:41 am »
First of all, seeing this thread posted makes me incredibly happy. Even just seeing you spitball out ideas for the game while reflecting on their greater effect.. It's fun to see. I'm just going to reread your thread and comment on certain posts that you've brought up in order.

Here's some of the things that will (almost certainly) be part of the hack:
- Expanded world, obviously. The Overworld will be more than twice the size of the original, with more diverse terrain, at least one new functional tile (Ice Tile), Overworld may change over time and random battles will be more diverse. More palaces and/or larger ones.

This is definitely a good idea, although obviously with greater design considerations to consider as well. A larger world becomes much more difficult for the player to keep track of, especially in older games that often lack recognizable setpieces. The (later mentioned) map would certainly help in this regard, but additional world map tiles may help with this as well, even if they function identically to grass/desert/graveyard. This would also mean another tileset for random encounters, which is more effort, but would also help the world feel less repetitive.

Towns could actually use the same variety, come to think of it. I'm not sure the tileset limitations that exist, but having each town look different (just as palaces do) would really help, even if it's just a palette change. We all remember the weird feeling we had when we first entered Old Kasuto!

- Only one saving slot. Since most people will play on emulator, I think it's a small sacrifice. The main reasons are to simplify the saved game interface and free up space needed for expansion. The original game has considerable free space in Cartridge RAM, but it can't be expanded.

I don't see any issues with this, honestly. Two may be preferable and has history in the series already (Majora's Mask), but this is indeed a world of emulation. One is fine.

Definitely agree with this. While I'm a fan of the current graphics, they can definitely be improved. It will also help your project have more of its own identity. This very well may not be your area of expertise, but what about music? If people were interested in assisting, this would be a cool way to further feel different, though I'm not sure how easily expandable Z2 is in terms of music, both overall length and amount tracks. (I may just be a huge fan of how cool this "demix" sounds.)

- New enemies, and enemy behavior. Most original enemies will remain, but they will change behavior, either permanently or become stronger later in the game. Same goes for bosses, either change their current behavior and/or create new ones.

Also a great idea. Taking other enemies from the series may help this feel more like a "proper" Zelda game, which was a common complaint of the original.

Here's some things that may be part of the hack, all depending if I have enough time and if I can actually code them reliably:

- Map system. Press Select on the Overworld to display a map of the current region. Map pieces will have to be found. With the expanded Overworld, this could become more than a mere caprice.

As mentioned prior, this would be great if possible. Especially with the larger map.

- More spells. From 8 to 12 spells, most likely. If there's a real need for more than 8, there could be a way to have more, but it involves new coding. The original game has a few spells with questionable usefulness.

I'm mostly curious as to what spell ideas that you have. The original game does indeed have spells of questionable usefulness (Fire, Reflect, Spell, and Thunder). Buffing Fire and Reflect should be easy enough to improve, since they don't really apply to most enemies in the game. Having Fire actually damage everything (and do more damage), while having Reflex allow Link to block effects that he couldn't before would do wonders already.

My main concern with more spells is wondering what sort of niche they'd have, while still providing general usefulness.

A fun idea for sure, but I'm not sure how to make these improvements feel impactful without making the original item/spell not seem weak. This may require some brainstorming. As for special moves, I'm curious what other functionality you could give Link, the combat as-is feels simple, but is somewhat graceful.

- Extended dialogs from friendly NPCs. Have more meaningful and longer dialogs that reveal the story in more details.

A great idea. With a text-speed increase, of course.

Now, with the things that I still have to decide on, and that will certainly change the core gameplay even further. I like the idea of making a hack considerably different from the original game, but I also think the essence of what makes Zelda II unique and fun must remain. It breaks down to these things:

Lives and health are indeed intrinsically linked, and I'm glad you see that as well. My own personal opinion is as follows:
- Heart/Life drops should be a thing off normal enemies, and approximately as common as you'd see in a game like Link to the Past.
- To counter that, that the "Life" spell should be moved much later in the game, and provide more health at the expense of being even costlier. This would cement it as a very powerful late-game ability that lets Link not necessarily be reliant on enemy drops in dire situations.
- Falling into a pit should not be a cause of instant death. While a common trope to platforming games, it does not mesh well with the Zelda spirit/gameplay flow. Instant-death effects should be rare and highly telegraphed.
- Lives may need to be looked into if things were balanced this way. I think if done properly, they could gotten be rid of.


Experience system - It's a part of the feeling of the game, though Another concern with doubling the size of the world would be that the level cap of 8/8/8 may feel insufficient. Either it takes too long to level, or leveling caps out way too early in the game. Increasing it to 10, or even 15 would really make the player feel more powerful by the end of the game. Also, losing all EXP on game over feels bad and limits what you can do with the Lives system.

Difficulty - This is complex. While we live in an era where most NES games are way beyond the difficulty scope of most gamers, hacks like this typically aren't found by the "average gamers," either. Most people playing will be fairly seasoned gamers.

While it would accomplish the same thing as requiring more skilled play, perhaps there could be some (well marked) bonus/challenge areas that would need to be completed for the best ending?

Save System - I'm much more a fan of restarting in the current palace than the system you've suggested. Though I also would like to see towns feel more important at the same time. Most older RPGs put the player in the last town they visited when they die. Perhaps a combination of the two? If you die in a palace, you start there. Otherwise, you come back in the last town you've visited.

Again, I'm super happy to see this thread! Hopefully I don't feel like the obnoxious "ideas man" that dictates things without contributing to their implementation, as I've been on the other side of that coin before. Best of luck with this project! I'm very much excited to see how this ends up.
17

Rewriting that because it's not convenient to explain in the introduction... Doesn't seem like a good reason at all.
19

Do you know if the line length is actually 10 or 11 characters? It actually would change a lot.
Pages: [1] 2