Quote from: lexluthermiester on June 13, 2022, 03:13:42 AM
As commented above, Queue has had some real-life things going on. Whether or not this will be the final version remains to be seen. If it is, that'll be ok as seems perfectly stable.

I assume the current version is the final version? Or is there something else in the works?
#3

Personal Projects / Re: Arcturus - The Curse and Loss of Divinity

That long spell names looks awesome, looking forward to it!
#7

December 20, 2021, 10:46:16 PM
I finally managed edge out one of the hardest fights I've had in the jrpg games I've played and now I'm able to try EX mode! I just wanted to ask about this thing which I just have read is an already known issue, does it affect anything in the game if you accidentally clicked change outfits in EX Mode? I found out that pressing any other button will not do anything while pressing A exits the dialogue. Does a save file get affected if you save after exiting this blank dialogue? 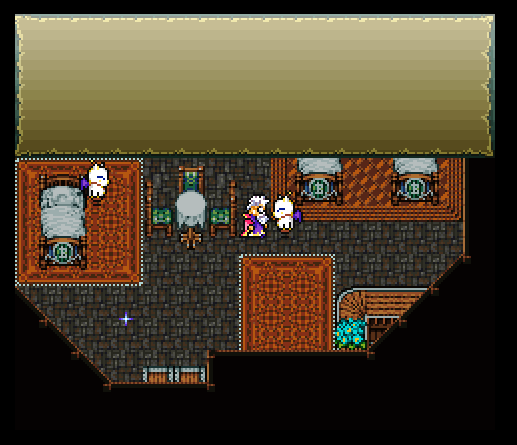 Quote from: JonataGuitar on December 10, 2021, 04:24:30 PM
I post the updates on a discord hack server dedicated to castlevania

December 19, 2021, 07:42:49 AM
Swordmaster, your first photo is a known issue that's been on Mato's readme even when he first released the translation under known bugs;

-KNOWN BUGS:
Auto-Optimize after a relic equip/unequip can sometimes result in an oddly formatted text message

Your second one is simply a matter of overlapping text because of a long description and the inventory item count which will reach 3 digits later in the game.
#10

Quote from: Kain Stryder on December 12, 2021, 02:44:04 PM
Thanks for the reports, I went ahead and fixed both errors and reuploaded the files. Seems the Black Lizard text said Break even in the Japanese version, (JP notes says Long Tongue from my translating) so we'll need to also correct it in my work. It now says Long Tongue in Mato's however, all good.

Thanks for the quick fix!
I've ran into another thing as I was training my characters to learn magic and and swapping espers around. I believe this is similar to an issue found in the previous pages but this time it's the esper Seraphim that shows up as Catoblepas in the Status Menu. 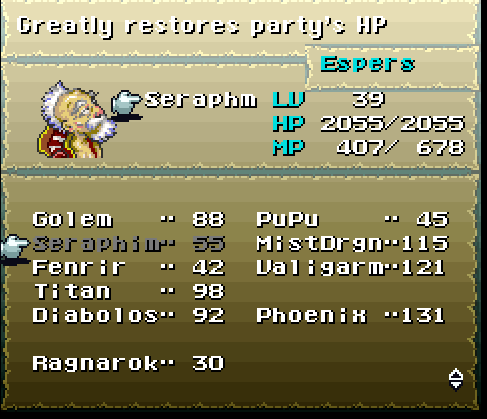 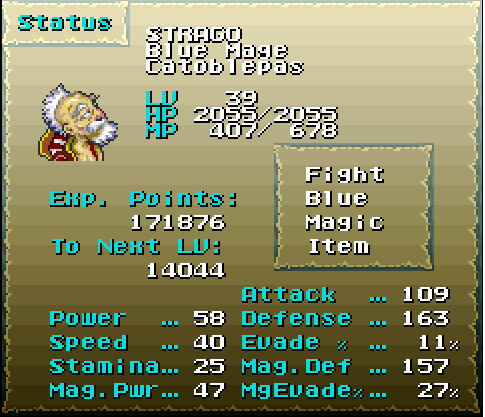 Quote from: Raijinken on December 11, 2021, 03:11:37 PM
Yeah, you can get all the Genji equipment separately, plus som even better gear later on

For the thread, I have ran into an issue, this time about the Rages. The rage menu displays a different ability compared to what the Rage actually uses in battle. I have only tried Black Lizard which says that its special ability is Break however it uses Long Tongue in battle. 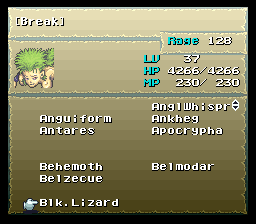 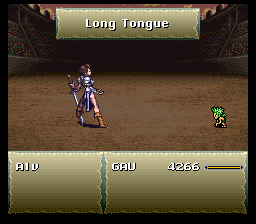 December 11, 2021, 05:33:03 AM
I'm having a hard time moving forward due to some of the new encounters in the ruined world, ​but the challenge is refreshing.

Thank you Mato and Kain for the translation and maintenance of this amazing mod.

[spoiler]Are there other pieces of the genji set available in the game aside from the genji shield and gloves or are we stuck choosing just one between the shield/helm/armor through betting in the Coliseum?
[/spoiler]
#14

Quote from: Rodimus Primal on December 07, 2021, 04:13:52 PM
I looked under the hood of this just to see what it was. It is simply Ted Woolsey Uncensored Edition using the patch with bugfixes and add-ons, and just inserted the GBA script wholesale and removed anything Slattery did to liven up the script.

Quote from: Chronosplit on December 07, 2021, 10:53:49 AM
Can't speak for everyone but I never was much of a fan of this.  Even with projects that were obviously well cared for like Emerald Enhanced, it just didn't feel right.  Even official remakes try but I always just go "nah" at the updated mechanics.

I think it's mostly Pokemon with these type of hacks because it's mostly the same game with newer stuff in the gameplay mechanics.  It wouldn't really work with many others.

I agree. Especially when they describe their romhack as genuine Gen-# experience. It just feels like being deceived in a way no matter how much "better" the new mechanic is.
#16

December 06, 2021, 03:23:15 PM
How would you define a "Definitive" version? Is it simply the original experience of playing the RPG but with bug fixes? Or would it entail QOL changes that are deemed to be "required" by the playerbase because they get frustrated from what they perceived as a "flaw" of the original game? Or maybe it also regards the translation of the script, item, character, location names, and the dialogue?

Or is it simply a frankenstein version of the original game where feature creep, usually copied/ported from other game versions, are implemented into the original game? Most pokemon romhacks fall into the trap of the final one and I really disagree with anyone saying/defending that such a romhack is the definitive version.

Personally, I define "definitive" version as the original experience with bugs flattened out and at most a graphics upgrade. Whether this is achieved through a patch/hack it's fine as long as the base gameplay and overall story is untouched. So I'd say that for pokemon games, the definitive version would be the original game itself unless newer remakes/remaster comes out and proves to be better like Fire Red and Leaf Green for Gen 1 and HG/SS for Gen 2. Gen 3 would remain to be Emerald. Gen 4 would be Platinum. And Gen 5 onwards would simply be the vanilla games.
#17

Quote from: Chrono 199X on November 21, 2021, 09:05:05 AM
Anyone here played through this hack by MoleMan start to finish? It seems it doesn't have a discussion page or any extensive reviews. A friend asked about romhacks for this game. I've played through the hacks made by Rodimus Primal and Hairy_Hen and they're great but for someone playing VI for the first time since release like him a hack like this is probably the best option. Since it's a 1.0 version still i want to know if it's working fine from start to finish before i recommend it to him.

I too, am interested. Both the romhacks that you mentioned have many things that veer away from the vanilla experience, I'm curious whether someone playtested this one since GBA Script + SNES FFVI would be perfect.
#18

Quote from: JonataGuitar on November 21, 2021, 09:43:39 AM
I'm working on a Harmony of Dissonance color hack, it's almost done, maybe before the end of the year I'll be posting it here.
you can check how it's doing here on my deviantart, https://www.deviantart.com/jonata-d/gallery/80912889/castlevania-harmony-of-dissonance-color-hack

Is deviantart the only place where to see updates regarding your progress?
#20