« on: July 19, 2020, 11:55:38 am »
Hello everyone, as a new member I wanted to show off what I’m working on, a complete graphical overhaul of the NES Super Mario World bootleg. This project aims to replace every single graphic within the game with ones ported directly from the original as well as bug fix and improve a few other aspects of the game.
Also I’m mostly making this post to see if anyone is interested in the project and if people are interested I’m more likely to work on it actively, so it'd be nice to know if anyone wants to see this get finished.
Here is the improved title screen for the game:

I’m working with another user, Quick Curly, to achieve these improvements as I do not know much about the technical side of hacking. I’m working on the graphics and I ask him to help find or change certain aspects of the game, then when he has found the data that needs changing, one of us can modify it. For the title screen we had to change the pointers for the attribute data so that the text could be coloured properly and block data for the background also had to be updated to display correctly.
This project is built off of the hack made by The Jabu back in 2017, this is because his hack did a couple of bug fixes. All of the graphics in the game will be redone though, even ones already updated by the Jabu. I originally started this back in 2018, but I lost motivation for it, but I’ve restarted it again, picking up from then but planning it out a little better this time.
Since restarting the project I’ve worked on the title screen and small Mario’s graphics, although far more changes were made back in 2018, most are unfinished or need errors to be corrected.
Here are some more screen shots:
Spoiler: 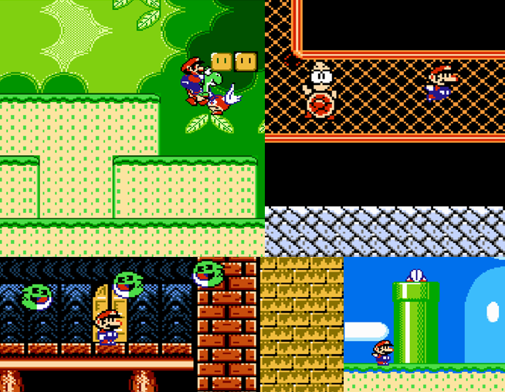 As you can see this is a very work in progress hack and some bits are still wonky from unfinished changes, but it will all be fixed eventually
Small Mario’s sprite data has also been updated so his arms can now be behind him when he runs exactly as in the original. Due to the game originally sharing head tiles between the walking and running sprites this wasn’t possible, but now that it picks a different tile for running Mario can look more accurate than ever.
Spoiler: 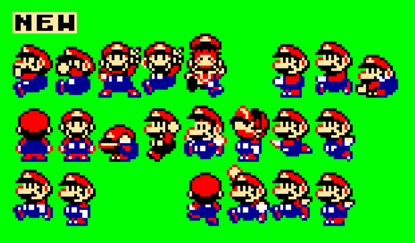 Anyway, thanks for looking at my post and let me know what you think of the project so far