Personal Projects / The Legend of Zelda: A New Light

« on: May 10, 2020, 12:21:18 am »
Hello ROM hacking community! I've released several versions of The Legend of Zelda: A New Light now and I'd like to use this thread for discussion and to ask for some help. Thanks to everyone who's helped me along the way so far.

I now have a much larger release that I'd like to get some testers on before submitting it to the site.

The release candidate is here. There's a list of major changes in the readme and a ton of smaller changes not listed.

I also have a few minor issues that I need help with:

First how does it work? Second, how can I move the secret path to a different location? I tried debugging around LDA $EB/$EC (A5 EB) and CMP #$1F (C9 1F) but couldn't make out anything relevant.

Btw, I have a few other questions like this around Zelda 1. Is it ok to post a new thread here under Discussion for each question or is it better to start a new thread under Personal Projects and lump them all together there?

« on: April 09, 2020, 09:36:12 pm »
I'm working on a small change for my Zelda 1 hack which uses two different map cursors, one for the overworld and a different one in dungeons. Why am I making this change? Because the hack also contains automap where a smaller cursor looks great - but the normal cursor looks better in the dungeon.

It has been mostly successful but has introduced a rendering artifact because I'm currently using tile $1C (which seemed unused but actually is). I can't find where the artifact gets written (Mesen shows it's a sprite). Here's a screenshot to clarify the problem: 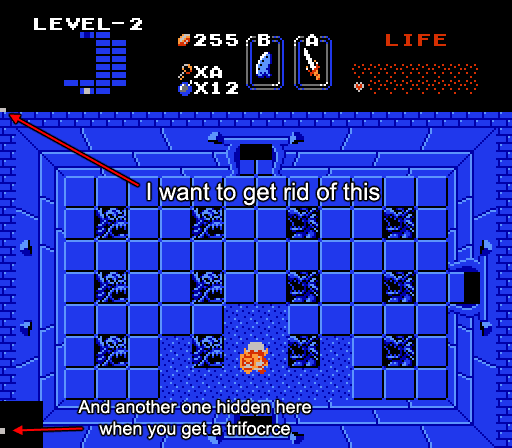 And here's the patch. It can be applied on top of my hack or vanilla Zelda 1. The most relevant bits are at $7761 ROM / $7EE1 RAM. I can paste the commented code and related data locations if that's helpful.

Any pointers on how to get rid of this or how to use a different tile from the other pattern table will be appreciated!

April 11, 2020, 02:58:08 am - (Auto Merged - Double Posts are not allowed before 7 days.)After reading a doc about OAM on nesdev it was much easier than I thought to change to an unused tile (see part about bit 0 in Byte 1). For example, FCEUX PPU Viewer showed $5C for an empty tile in the right side pattern table so add $1 to make it $5D. Too easy. Here are the relevant RAM locations for anyone wanting to edit the cursors.

Based on the same OAM document it occurred to me that I could find the original rendering artifact as well. Before I had been searching for $1C $00 (the tile id plus the palette number) which didn't yield what I was looking for. But I had also noted that the sprite was behind the background. That was a clue that bit 5 of the attribute byte would be set. So add $20. Viola, $1C $20 has only one occurrence in RAM and it's what I'm looking for. Once I found that, another solution to my problem could be to add $80 to the attribute byte (bit 7 is flip vertical), making $1C $A0, to effectively hide the sprite behind the background. Fun stuff!
4

I also found the following sounds using the technique outlined later in this thread. I'm not sure where the corresponding table is located.