« on: July 03, 2019, 11:38:38 am »
Not really sure why my url is not excepted when submitting a new patch.
In Additional Help File submissions it says "URLs to files must be a
direct link, meaning when that URL is entered into a browser, a download
should start."

My url entered into a browser starts a download but I get this error when
I try to submit my file:

1. URL 'http://download2269.mediafire.com/va8p8v3d8eag/k303kv192zm9i3d/start%2Bat%2Bany%2Blevel%2Bgradius%2B3%2Bv0.2.zip' is not valid! File URL's from domain 'mediafire.com' are not allowed because they are not direct links to the files which are required for automated processing. See the following url for our recommendations: http://www.romhacking.net/?&page=help&action=additionalhelp

I have used mediafire.com before to upload a doc but I'm not sure whats
going on with uploading this new patch. Can I no longer use mediafire.com,
is my link not a direct link, or am I doing something wrong?
2

ROM Hacking Discussion / What is the policy on releasing fully disassembled assembly for games on here?

« on: January 08, 2019, 06:49:17 pm »
I have the full disassembled assembly for snes gradius 3 that I would like to release. Is this something that I can upload to romhacking.net without breaking any romhacking.net rules?
3

I currently have 2 important projects that need to be finished and released.

I have a near complete Gradius 3 fast rom. All assembly is complete there is just some data that still needs
to be changed to fast rom locations but it shouldn't really affect the speed much. There is definitely a noticeable
amount of decreased slowdowns but it still doesn't remove all slowdowns. Here is the patch:

I also added extra difficulties that you can unlock by holding L, R, Y, and B buttons at the same time when you go into the
option menu. There are 4 new difficulties which are elite, master, expert and pro. Normal, hard and arcade are slightly easier.
Elite difficulty is the same as the original arcade difficulty but master, expert, and pro are gradually harder with pro as the
hardest. 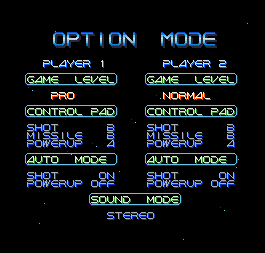 The lastdual helped me with this patch by checking for bugs that I might have missed. There could still be some bugs so let me
know if you find any. I really need someone to try and beat the hardest level to see if there are any bugs in the gameplay.

My main goal for gradius 3 is to remove all slowdown, add sram and make it feel like a competition cart. I also want to add
a new system for calculating your score after each boss kind of similar to super punch out. Now fast rom will never remove all
of the slowdowns so I have been learning about the sa-1 chip. I do have a gradius 3 rom that is updated to use the sa-1 chip but it
does not load gradius 3's assembly yet. I have been gradually changing the assembly code to store all wram data into bw-ram for
the sa-1 chip to work properly, this is near complete. When I complete the wram to bw-ram change I'll start working on getting
the sa-1 to load most of the assembly. I plan on having the snes cpu live in wram so the cpu's don't collide so I can get the full
speed out of the sa-1 chip. I have no clue how long this is going to take but I chose gradius 3 for this because it is a small rom.
I hope everyone enjoys the fast rom patch and the extra difficulties.

All of the mod chip stuff is at the end of that page but you can see how it ended up getting made from reading everything from the
beginning. I also modified a snes debugger to show the extra vram in the vram viewer so there is a debugger that's supports the extra
graphics. The link to the debugger is on that 1st page. Qwertymodo was a really big help in showing me how to create the castellated
holes to mount the pcb to the snes and he helped me in how/who to send the pcb to to get made. The entire pcb I designed myself and
created in eagle cad. Im getting ready to create a updated version of the super v-power mod chip and when its finished I'll upload
all of my schematics. Im not interested in making any money off of the mod chip it will be fully open source for anyone to make it if
they want to. I do have a few mod chips that Im willing to give away for free to people that have the skills and want to create hacks
that use the extra vram. If anyone has a fully working level editor for a snes game and would like to add this feature to their editor
I would be willing to modify the game that uses their editor to use the 128kb of vram. I already have a mmx v1.1 rom that fully supports
the extra vram but I need to write a editor from scratch to be able to use it. As far as all my searching online I am the only person
to try and get 128kb of vram to work on the snes. I was trying to get analog to get their super nt to support the extra vram but I
didn't have any luck probably because nothing uses the extra vram yet. One day they might add support for it.

Here is my mod chip installed on the snes motherboard: 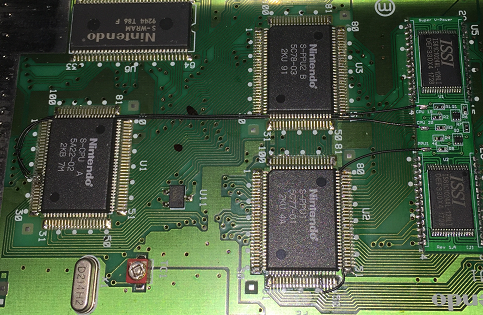 If I can get the sa-1 hack completed it would set me up for a project that will blow all other projects that I have worked on away,
which is, mega man x with sa-1, 128kb vram and a new engine to have game play like super metroid.

Moderators:
Hopefully it was/is ok for me to talk about this chip here because it could be a game changer for future snes rom hacks. If I broke any
rules let me know and it wont happen again and I'll delete the Project #2 post.

« on: December 17, 2017, 06:13:12 pm »
So the sa-1 chip on the snes is the most powerful enhancement chip made for the snes. I'm curious if it's possible to program the sa-1 to do the same things that the cx4 chip does? I have been diving into the sa-1 programming for gradius 3 and I was just thinking it would be awesome to add sa-1 to mega man x2 and x3 without messing anything up with them. Does anybody know if the sa-1 chip can do what the cx4 chip does?
5

1. There is a video for my mega man x competition cart.
2. I have a patch for all graphics decompressed in mega man
x v1.1.
3. Another patch for mega man x v1.1 that allows for 128kb
vram. The 128kb vram patch only works for higan v100
and up.
4. A mega man x level editor that is in very early stages. Right
now it only views bg1 tiles. This editor wont be finished for
a long time and it will only work with my reconstructed
project for mmx. You must have a 4k screen to view
everything.
5. A 7th saga editor. Doesn't edit anything just yet but you can
view sprites for 7th saga and elnard. It also has a early
stage paint system you just cant save anything yet.

I haven't posted much in the past few years but I have still been working on some things. I still get asked about my work and new patches so I decided to post these for everybody. These are still being worked on just at a slow pace.

Updated 1-3-18:
I have decided to change this wip page from mmx and 7th saga to just a wip page for 7th saga. I still plan to work on mmx and create new things for it. I changed it because I didn't want to clutter up this page with 2 different games.
6

« on: January 26, 2014, 11:16:28 pm »
I was gonna see if someone knows some good tools and documents that I can use for playstation 1 hacking. I did some searching but I'm having a hard getting started I already know snes programming and c++ so I should be able to pick it up pretty fast. I want to try and hack mega man x3 on the playstation 1 because the Super Nintendo is not powerfull enough to properly run any mega man x game without glitching plus I just need a more powerfull system for what I want to do to the mega man x series. If I can just edit a few bytes in a hex editor and save it to a disk to play on my modded playstation 1 that would be a huge step forward. Any help getting started would be much appreciated.
7

I have been working on a bunch of hacks and docs for mega man x1-x3 and 7th saga so I figured I will start posting some of my stuff here.

I would like to hear what other people think about it.
Do you think this is a improvement?
Do you think it could be better? How so?
If you think some of the altered icons for the life bars don't look good then let me which one(s) and I can try to fix them.

Here is the patch: http://www.megaupload.com/?d=SUROORGD

« on: July 16, 2011, 12:53:12 pm »
It has been a little over a year since I started to learn super nintendo assembly. The reason why I wanted to learn it was so I can redesign 7th saga. When I
tried to hack the graphics with tile editors I couldn't because they were compressed. I couldn't find anything on 7th saga's compression so I decided to
write my own compressor. I finally finished my compressor and my compression code works %100 perfect. It produces the same exact format that Enix used.
I didn't bypass anything in the compression like how it is done in other compressors. Eventually I will create a 7th saga hack with a lot of new enemies, spells,
towns, items and add more to the story to make the game more interesting. It will be awhile before I create a complete hack of 7th saga but in the meantime
here is a patch showing a new enemies graphics in game for 7th saga. http://www.megaupload.com/?d=NLUTDWHQ

Start a new game and fight a enemy outside of the town Lemel and you will see the new enemy in action. The enemy is from Mystic Ark (7th saga 2).

Programming / Why can't I find this ram address (snes)