« on: November 22, 2020, 08:54:48 pm »
This game has a horrible translation, both in the official US release and the translation patch released a thousand years ago.

I've always wondered what is the correct translation at the scene where Master Roshi grabs Bulma's chest:

Script Help and Language Discussion / What does this button prompt say?

Could anyone translate what this button prompt says?

It's probably something simple, but I see 4 kanjis and I get scared.

« on: April 26, 2020, 05:44:15 pm »
Crystal Guardian for the Satellaview / BS-X was recently dumped by Kiddo Kabuses, and the only Japanese the game has is in the credits. Would anyone mind translating what it says?

Script Help and Language Discussion / Can anyone translate these two onomatopoeias?

« on: November 17, 2019, 07:31:57 pm »
I was just playing the translated Ultraman for the Gameboy, and noticed the ending still had some minor Japanese left. Can anyone translate what it means? 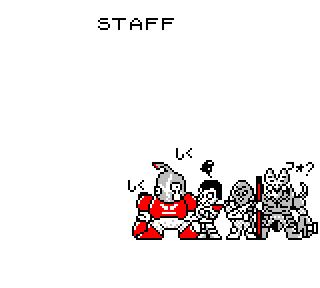 I assume the first one is something like Uru Uru (crying), but what about the second one?

Script Help and Language Discussion / Can anyone translate this Knights of Valour secret?

« on: July 08, 2019, 07:23:19 pm »
Turns out Knights of Valour The Seven Spirits  has a hidden character and a hidden last stage. I was able to figure out how to unlock the character, but I don't understand how to reach the true last stage.

After finishing each stage, you get the choice of selecting from 3 other stages. You also get to save a woman in the first stage. I assume all that has to do with how you get there. Problem is all the information about is in Japanese, and google translator doesn't really help.

Here's a screenshot of the original text, because some characters are not pasting correctly:

This page as more information about the levels in case you need more context:
https://web.archive.org/web/20181105210405/www.geocities.jp/wazaichiman/senki/senkitop.html
July 08, 2019, 07:23:28 pm - (Auto Merged - Double Posts are not allowed before 7 days.)Here's another Japanese description:

Newcomer's Board / Help patching Nekketsu Oyako (PSX), I get an xdelta error.

I open a command window, I type the command line as specified on the readme "xdelta patch oyako10d oyakoj.bin oyako10d.bin", and when I hit enter I get this message: "xdelta3 too many filenames: oyakoj.bin"

Anyone know what's going on?
7

Script Help and Language Discussion / Can anyone translate this word?

This are the credits for the BS-X version of Dezaemon. The credits themselves are just "graphic" and "music" and the names seem to be pseudonyms. So what could that "music" credit be then? 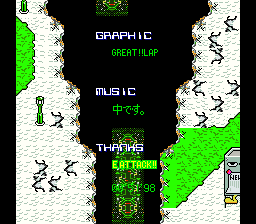 ROM Hacking Discussion / So, someone seems to have translated Albert Odyssey (+other games)

Granted, the translations are super rough, no variable width font, only uppercase, and some are only for menus or basic info like Tetris Battle Gaiden. I don't know how far along they are though.
9

Newcomer's Board / How do I find the text in this PCE game?

I opened the rom in a hex editor, but I couldn't find a single line of text, despite the game being entirely in English. I then used a couple of other tools that have worked for me in the past, such as SearchR3, and again no hits.

I assume the text is compressed then? What other tools can I use to find the text? I have no programming skills, so making my own decompressor is not viable

Script Help and Language Discussion / What do these 3 Kanjis mean?

The first one is "Gold", but what do the other ones say?
If it helps, the middle one is your energy, and the bottom one is the enemy's energy.
The one on the right is for a bar that increases every time you kill an enemy. So it's kind of like an experience bar. « on: September 13, 2016, 01:03:29 am »
The Dragon Force 2 translation is still missing some stuff that, for some reason, has not been translated yet; such as the credits and dialogue. Although the group isn't able to insert it in the game, they are able to have in the form of a text file and subbed youtube videos if someone would be willing to contribute it.

Could someone translate this bit of the Sharp X68000 version of Lagoon? The game apparently has different dialogue and situations when compared to the SNES version, and I was wondering if someone could provide a proper translation for this part after defeating the big boss.

That woman on the floor is Ferisia, the one you are rescuing.

Could anyone translate these lines from the Saturn Assault Suits Leynos 2 whenever you get a chance? Sorry for the big images, but that part is in high resolution Script Help and Language Discussion / What do these graphics say?

« on: February 18, 2016, 02:39:57 pm »
I found a super mega secret ending in the obscure Saturn game Tryrush Deppy (it's a nice sonic clone), and I would love it if someone could translate the text in those images, including the ones in the signs and stuff.

I think we are the first people to see these images other than the developer. I don't even know how to unlock it, I searched Japanese sites and found nothing about it. I found it trying to create a cheat code for something else

I just discovered that Guardian Force for the Saturn has a hidden ending, but it's in Japanese (unlike the rest of the game), and I was wondering if a kind soul could help me out by translating the text as shown below. I tried looking for a text dump of it, but I couldn't find one. « on: December 14, 2015, 07:53:40 pm »
I understand Front Mission 2 is already translated, however, the translation team was not able to insert a bunch of stuff, for which they have provided a text document with all the translations that didn't make it into the game. Unfortunately, they did not include the translations for the cutscenes, and instead relegated them to youtube videos... which no longer exist.

I was wondering if anyone could translate the text in this cutscene. I'm sure there has to be a Japanese site with a transcript of this hard to read text, but I couldn't find one. Anyway, I took screenshots of the text (or here's a youtube video of the cutscene https://youtu.be/BF945xlTS-k?t=3m38s )

Script Help and Language Discussion / What does this secret NES message say?

« on: May 14, 2015, 08:41:33 pm »
A Thundercade (NES) code was recently posted on Gamefaqs to see a secret message after the ending. Turns out the message was not translated when the game left Japan.
Could someone translate what it says? Script Help and Language Discussion / Can someone verify this translation?

« on: February 20, 2015, 02:44:53 am »
Hey guys, could someone verify if this translation is accurate and/or fix the rough parts? The game is Eltale, the Japanese Quest 64, which has a bunch of new dialogue that the USA version didn't have.

Also, if possible, could someone translate the text at bottom too? I'm missing translations for those.

Leon: Please hold on. Everything’s fine now. Let’s get out of here. Can you stand up?
Bart: Th... that voice. Is that you, Leon? Jean-Jacques... Jean-Jacques... what ever happened...?
Leon: ...I don’t know. But the evil wave that was blanketing this castle until now has vanished.
Leon: Perhaps it was Jean-Jacques’s doing.
Leon: He, along with the spirits, protected Celtland from the evil presence. He is certainly a master spirit tamer!
Bart: Jean-Jacques... ! You... to think that little ol’ you became a master spirit tamer. I thought you were just a mere child...
Bart:  Please be safe, Jean-Jacques... Spirits, I beseech you! Please protect my son.

Titi: Thank you for all your help. I’m going home to Greenoch. Take care, people of Normoon.
Anette: Is that so. You’re leaving? But I heard that  Greenoch was burned to the ground. Will you still go back?
Titi: Yes. Word is that it’s safe there now.  Greenoch is my home. Even if my house isn’t there anymore, even if the land is ruined, I want to return home.
Titi: I can just rebuild my house. Everyone will work together to bring Greenoch back to the way it was. Surely, even if it takes a while...
Anette: I suppose so. Yes, that would be good. With that kind of spirit, you young people should be able to return the town to its former glory. Good luck to you.
Titi: Yes, thank you.
Titi: Zelse... I’m sad that he’s gone. But surely he will....!

Newcomer's Board / How do I find the script to this N64 RPG?

I'm trying to find the dialogue text for the game Aidyn Chronicles (which could have easily have been called Elder Scrolls 64), which happens to have a ton of character specific dialogues depending on who your party is, how you answer questions, where do you go first, etc.

I open the rom with notepad+ and hexecute, and the only thing that stored in ASCII are the item and enemy names. But the letters are not even in order, for example, the enemy "Tomb Rat" is spelled "oTmbR ta" inside the ROM.

I tried using the tool called SearchR3, that helps me find compressed text, which I can use to build a table. But I couldn't find any dialogue text.

So, does anyone know what tool can I use to find the script, or maybe an experienced gracious person can dump it for me?

Script Help and Language Discussion / What does this Japanese line mean?

This shows up after the credits in the PCE game called Fighting Run. Basically it's about robots fighting each other while racing. Can anyone tell me what it says there?