« on: June 25, 2020, 01:42:17 am »
Been working on a translation of Masakari Densetsu Kintaro Action Hen (マサカリ伝説 金太郎アクション編) Gameboy for the last couple of weeks and it's finally starting to come together. The game is a story driven platformer that draws on Japanese folklore in many funny ways. It was already playable even if you didn't know Japanese but I hope that once the translation is finished that everyone will enjoy it even more.

Game text, graphics, and font have all been updated to varying degrees. Lots of stuff still needs to happen so volunteers are welcome.

I'm very open to revisions especially since I now have a better idea of how much space is available within the ROM.

I could use some help with graphics as that's not my main skill, editing, and translation (http://www.romhacking.net/forum/index.php?topic=30855.0)

Big thanks to zuvi's game room (https://twitter.com/zuvittonan) for letting me know about this game.

And here is quite possibly my favorite scene from the game so far ...

« on: June 10, 2020, 07:08:17 pm »
Looking for someone to help with Masakari Densetsu Kintaro Action Hen on Gameboy. I've already translated about 40% of the strings and would love to get help on the longer strings, validating what I have translated, and making sure it stays true to the folk tale.

Translation doc: https://docs.google.com/spreadsheets/d/1APzTiC7V01RuIw7wwa4pPEDE0bQdoHCtWMFvcqacvFI/edit#gid=25919150
(PM me and i'll add you as an editor) 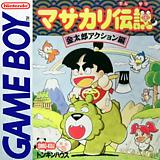 Most of the easy to find text has been translated.

I'd say I'm about 40% complete and would love some beta testers for the initial release: https://git.io/v2YD5

Gens seems to have support for it but the 68k debugger window only goes to x20015 when the demo rom i'm working is at x203710 and it's labeling most operations as 'Bad Opcode' which I find strange.