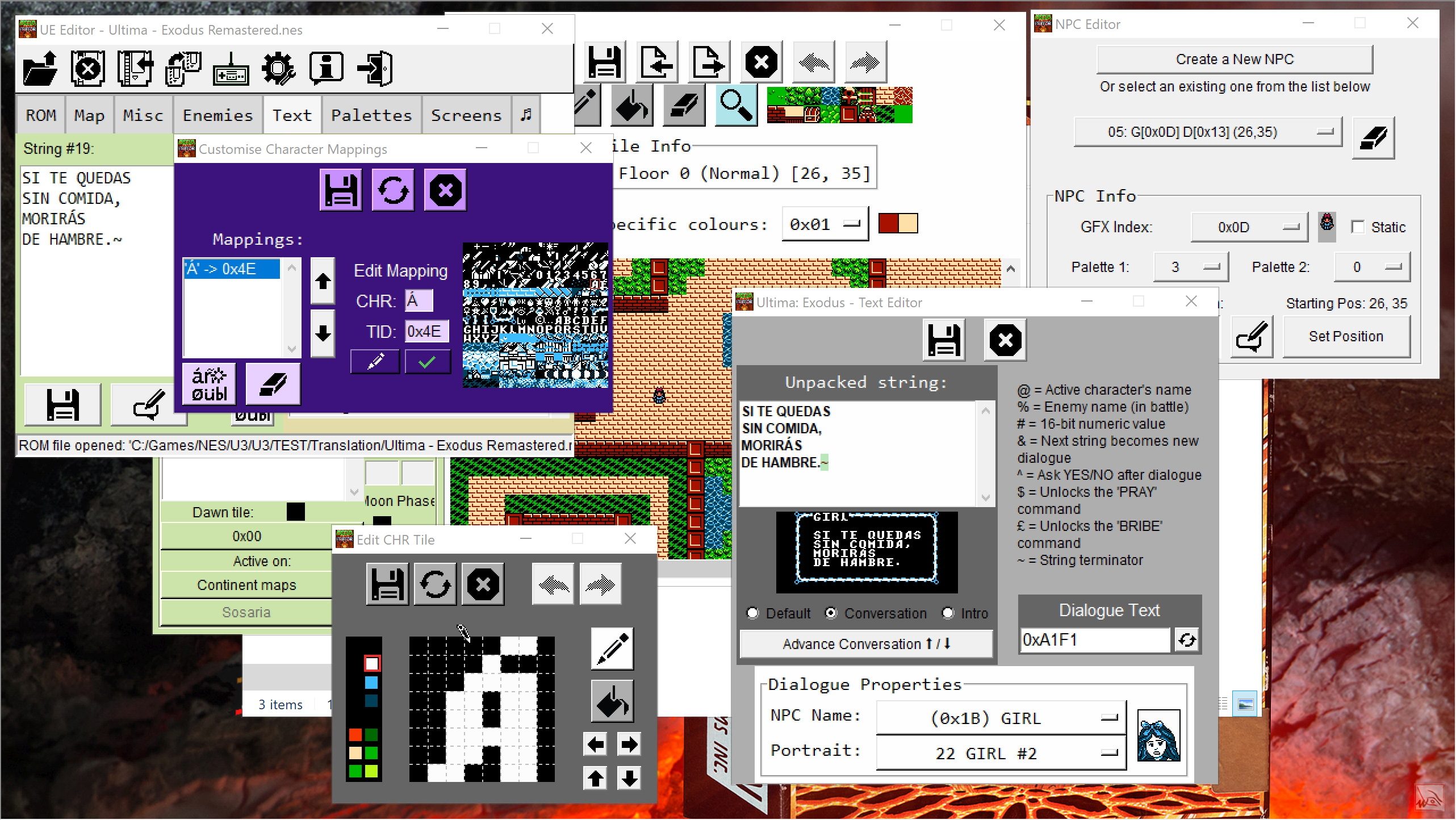 Also made an alpha release package for Windows: https://github.com/FoxCunning/UE_Editor/releases/
It may be buggy and there are still a few features left to implement, but it's becoming usable.

I understand it will be a complex tool to use, and I don't have the equipment or the voice to make video tutorials

so you'll have to wait until I have time to write down a little manual.
3

how to use this program?How do I open it?Maybe you need some program to run?Help!!

Hey! Thanks for checking this out.
Once I have implemented all basic features, I plan to make a nice executable packages for Windows, Linux and Mac OS.

For now you will need to use a Python interpreter.
Assuming you are using Windows, this is the one you need: https://www.python.org/downloads/release/python-387/

Now download the source code if you haven't already: https://github.com/FoxCunning/UE_Editor/archive/master.zip
Then on the command prompt go to the folder containing editor.py and run: python editor.py

If that's a lot of trouble don't worry: I shouldn't be too far from an alpha release.
4 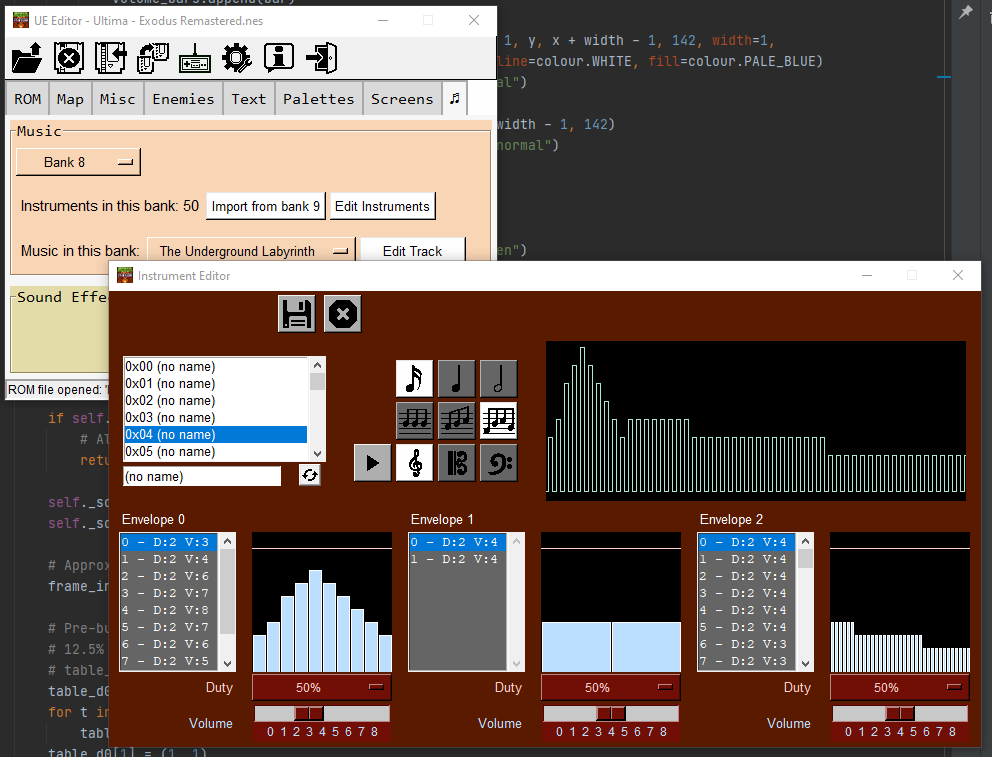 I wasn't a big fan of Zelda II, but I'd definitely play this hack.
7

I've been busy, so here are a few progress screenshots:


As you can see, some fields are disabled in the original ROM (i.e. primary attributes and second colour for character sprites).
10

The "Special Abilities" module is all done: 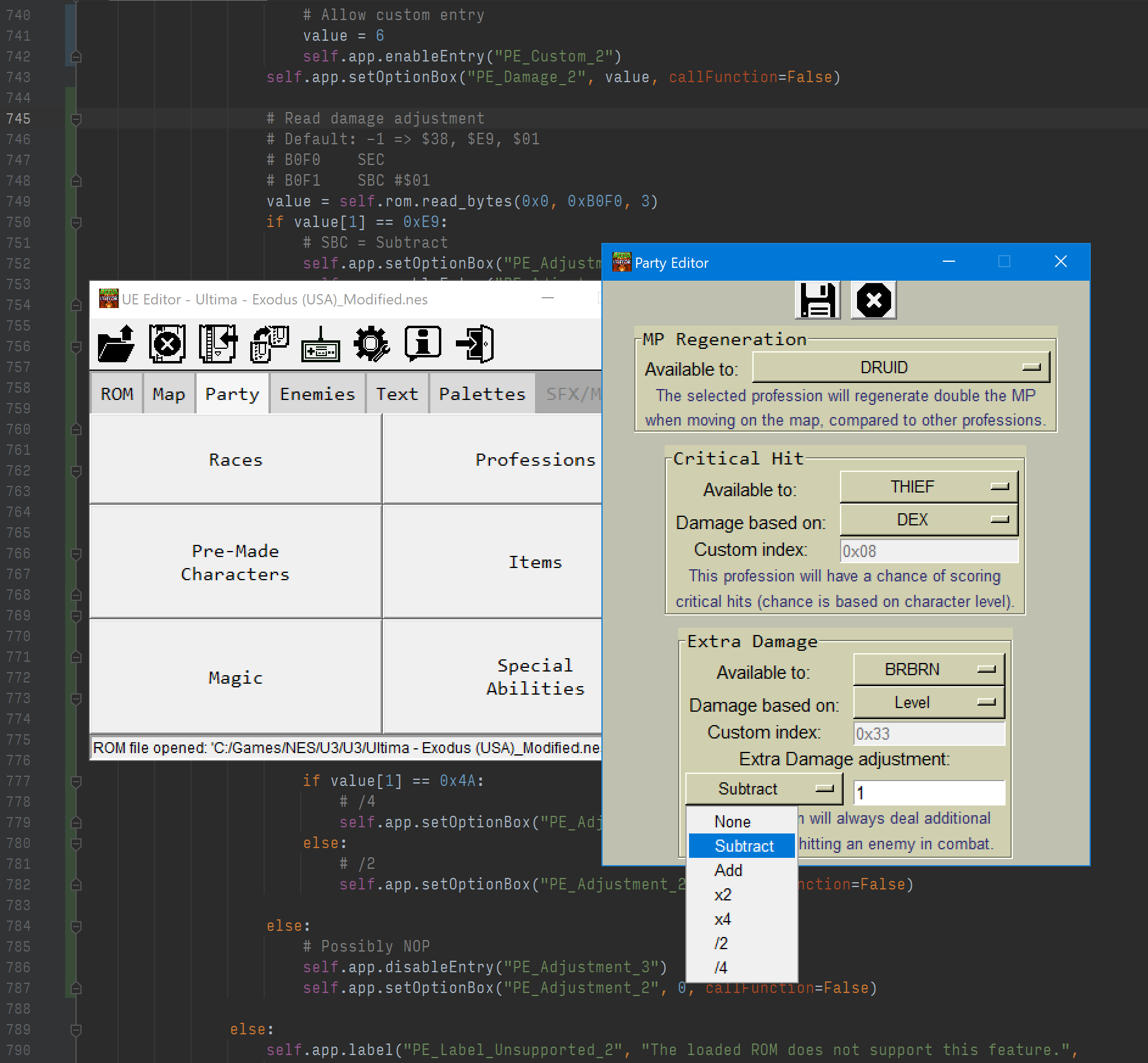 And the "Professions" module has been expanded to give control over casting abilities of each class: 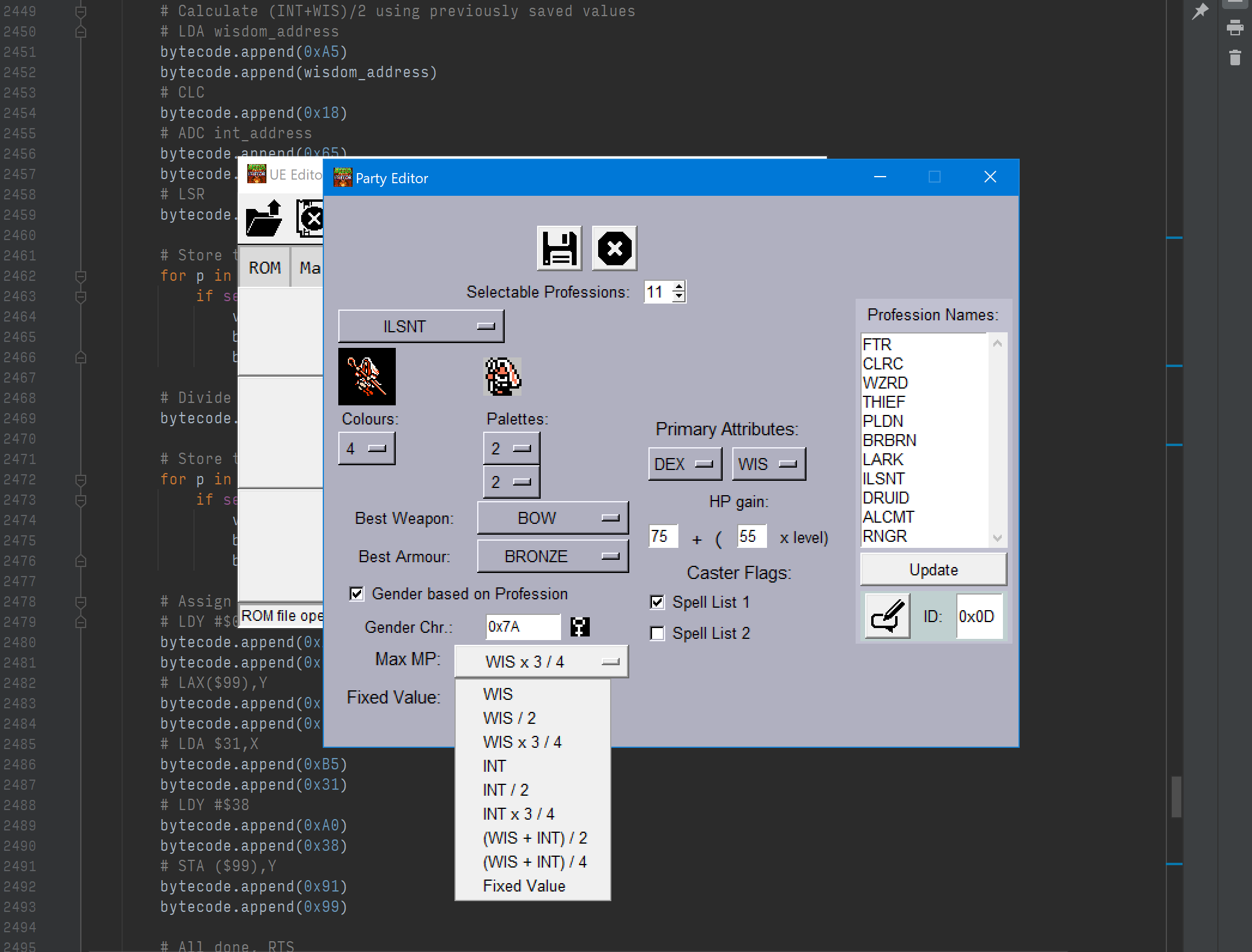 Amazing to see that after all those years that dream is coming out!

I'll try my best not to disappoint, but can't guarantee

It's already looking quite complex, and that's by design since I want it to be able to edit every possible aspect of the game.
Maybe I will have to do a series of tutorials on how to use the editor once it's ready.
11

« on: October 05, 2020, 06:00:47 am »
Sorry about the late update. I suffered a little setback my main drive failed.
Luckily I had an external backup, but still I was set back a few weeks, plus I took that occasion to completely rebuild my main PC (this time with a RAID 1).

I am almost to the point where I was before the incident, minus one feature that I have to re-implement.

In the meanwhile, also as an extra form of external backup, I have put the current (if extremely messy) code on GitHub.
12

Excellent, I enjoyed very much the progress shown in the youtube videos on your channel. What would be the next steps to tackle?

Thanks mate, it's always encouraging to see that there is interest in a project

I am now working on the sub-modules that allow editing weapons and magic.
After that I'll tackle customisation of the pre-made characters, and then the final step will be editing sound and music.

That last part might prove challenging because I had not touched the sound engine in the game and thus will need to first reverse-engineer it, but we shall see.
If that doesn't take too long, then I will have time to also add a nametable editor; that would allow easily changing the title screen, the intro "cutscene" and a few other things.
13

Here's a quick video of it in action: https://youtu.be/fbLZaGfvHl0
14

This took way longer than expected, as I managed to introduce 3 bugs with the same code - which I have finally managed to fix. Phew!
15

NES:
There are fountains in the dungeon.
Go to Dawn.
Have you ever heard of Dawn?

Apple II:
Spoiler:
Fountains fair and fountains foul, all are found in dungeons bowel.
'Dawn' comes each new pair!
West 8, South 35 and await the Dawn!
The NES script can be cleaned up lots.

To be fair, the actual NES script says:
Spoiler:
'West 8, South 35 and wait for new moons'.
That line was however inaccessible in the original release because of a mistake in the compressed string.

If you talk to every single person in every town, you do get enough hints to put together the correct sequence.

I'd have to replay this one sometime but I remember U3 being light on exposition. It could help to add some of the book lore to the script maybe.

On this, I was referring to some extremely vague dialogue such as "The Mystic Armor is somewhere" that I don't think really helps and could be made useful by expanding the text, e.g. "A man in Grey knows about the Mystic Armor".
Spoiler:
An NPC in Grey actually does have a valuable hint and tells the player to ask about it in Dawn, where again two NPCs have useful hints.
That was difficult because it requires moving code and rebuilding pointer tables, which if done manually is prone to breaking things, and also a major pain in the bum.

That said, I am a fan of game manuals. When I was a kid, buying a new game was an event, and I'd spend days studying each booklet, manual and map included before actually turning my console/computer on.
With Ultima, reading the cloth map was a game by itself as you had to decode the runic alphabet using the table contained in one of the booklets.

It's always great to have the opinion of someone who is wasn't already familiar with the game, as I would have never thought about many things you mention.

Now some would require extensive rewrites of the engine, but others are absolutely doable. Obviously at the time games relied on information taken from manuals, booklets and hint guides (the original release of U3 I think included 3 booklets, plus a map) rather than in-game text.
That was because of hardware limitations mostly, but also game design had not evolved much.

I did think about modifying NPC dialogues more to give more hints and better direction. However at the time I was changing bytes by hand with a hex editor, so changing the text length was risky and difficult. Now that I am working on an editor which already includes packed text reallocation, that would be much, much easier.

Note that locations, town names, weapon and armour effectiveness etc. are all explained in the game's manual - as I mentioned above the game just assumes a certain level of "meta-gaming". This can be fixed only partially by changing in-game dialogues, but note that many hints are already present and I believe it would be just a matter of linking them together as organically as possible.
18 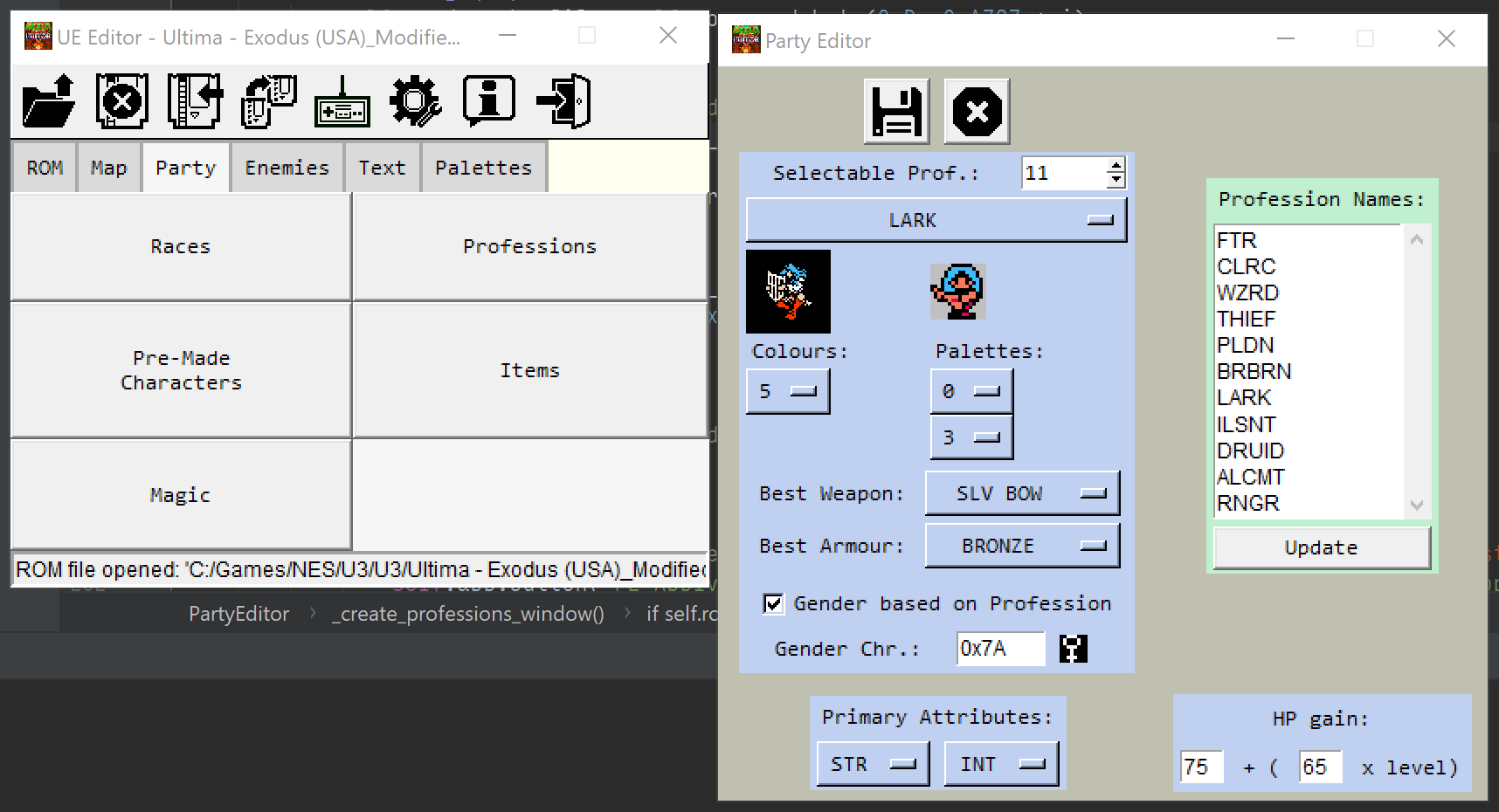 1. Is there any way to edit the ordering of magic spells? I saw where you noted the costs were hardcoded (and you had to change two places in order to drop MP consumption), but would there be any way to alter the order you "learn" them in? Switching "02 05 55 d5" etc seems to switch spells, but the costs are still the same. I.E., Missile can be switched with Light, but still costs 5 MP, even when its place is altered or the second byte is changed to 10 etc.

This could be achieved by completely re-writing the routine that displays the spells list so that it takes the MP cost from the table at $D460 and goes through each spell instead of stopping when the caster's MP is matched.
The current routine simply assumes that each spell costs 5 MP more than the previous one (4 in the hacked version).

That routine is in $D415, and calls a subroutine at $D441 to get the number of spells to display. Note that it only decides how many spells, not which ones: it will simply show spells 0 to that number.

The only easy modification I can think of would be setting a level limit rather than just an MP match.
Then check if the caster has enough MP for the chosen spell before casting.
If that doesn't break the game too much, I may include that "alternative magic system" in the editor, but no promises yet!

2. Initial party placement in battles? So maybe more like Quest of the Avatar? Have you found how the game decides where to place characters at the start of a battle?

Yes, those tables are in bank 4: $B000 to $B0BF.
That's three 64-byte tables containing OAM data: one for land battles and two for naval battles. In each entry, byte 0 is Y and byte 3 is X.
One more table could be added in theory, as there are exactly 64 bytes free after the third one.

You have put so much work into this project Fox, it's awesome! My Ultima buddies are eagerly awaiting this editor.