What I want to do is add characters to The Legend of Zelda's filename input screen to be more akin to the JP version of the game (it has both the Latin alphabet AND katakana).

What kind of guide should I follow to learn how to do something like that? Or should I just translate the JP rom instead? If I do the latter I'm assuming it won't play well with the US rom.

EDIT: I've realized I can just do this with the US rom but I'm still not sure on a few things and I was wondering if someone could point me in the right direction so I could learn:

1. I want to be able to select the characters where the blank spaces normally are. In the pic I can't select 'Ꭱ', 'Ꭳ', or 'Ꭵ'. What should I do so the cursor doesn't skip over those normally blank spaces?

2. I selected 'Ꭰ' for the file name. What should I do so that the name will type in the character is selects. I realize 'A' is normally there so it's pulling the information that something else was there from somewhere else but I don't know from where. 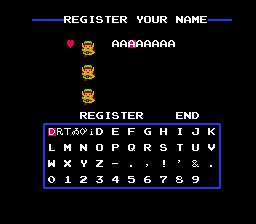 I've always liked games and I've been trying to learn ᏣᎳᎩ (Tsa-la-gi), the Cherokee language and I came across a font someone on this site made a couple of years ago and I thought 'why not?' so while I'm learning the language I'll try to make translations for some games too. Probably won't be anything complex unless I found a team but for some simple platformers and classics I really like? Sure.
Pages: [1]