News Submissions / Re: Translations: Before the EDF, there was the TDF: PSX mecha action game Remote Control Dandy tran

« on: October 25, 2019, 12:49:18 am »
Not sure if this is a bug with the original game or not, but I've noticed that when X is using the Gaea Armor with the Ultimate Buster part equipped, he only fires uncharged shots rather than charged.
3

I'm completely stuck at Totem challenge in Shinobi Village(Grand Prix Race #4) on Super Hard because the stupid rival only destroys 2 or 3 Totems and then get stuck at most of times.

This is the only Super Hard that I've been unable to clear myself.  I'll have to experiment with some other kinds of Puppets to see if there's a better way of clearing the totems than simply driving through them.  Driving wouldn't be so bad if the fastest of the puppets didn't rely on touch controls for steering.  >_>
4 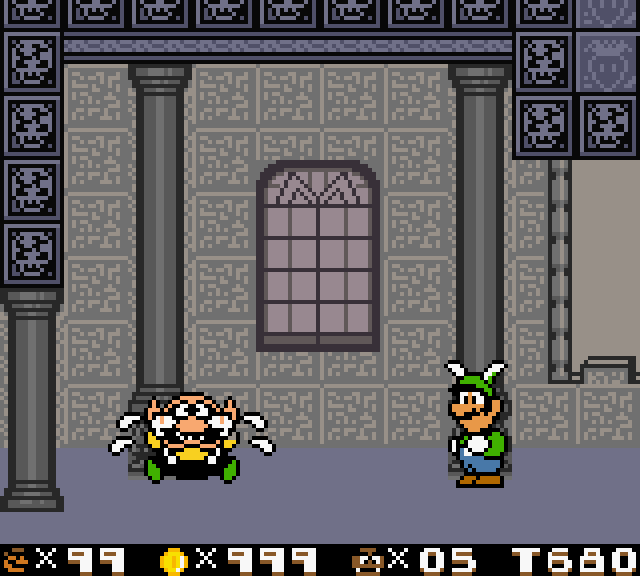 Minor graphical bug I've observed.  Three pixels of Small Wario's left sleeve are transparent on this frame.  Orientation changes I believe depending on what direction Wario is facing when defeated.  In my case, he was facing left.
5

« on: July 23, 2018, 08:02:18 pm »
Huzzah!  Very glad to see this released!  Just played through it today and thoroughly enjoyed myself.  The new save/load system is a VERY welcome change, particularly with so many save files available.

If there's ever a future update, it'd be nice to have something on the save/load screen that indicates which Doppler Stage is active once that point of the game has been reached.


EDIT: Unsurprisingly, many cheat codes for the original version of MMX3 no longer work here.  I was experiencing some odd behavior with Ride Armors when using an Action Replay code that allowed X and Zero to use the Z Saber with every push of the fire button but have now fixed that.  For those who are interested, the new code is 7E0A8F:80 (note that this disables weapon charging for both busters and subweapons while active).


I also found addresses and values for infinite use of the game's subweapons:

« on: August 01, 2017, 01:17:58 pm »
If you're leaving banks open for additional playable characters, have you considered perhaps (once everything else is finished of course!) someday adding in Vile as a unique playable character?
10

Newcomer's Board / How best to colorize and convert monochrome GB games to GBC games?

« on: January 13, 2017, 09:42:54 am »
Hi there folks, completely new to any aspect of romhacking that isn't applying patches and enjoying the great releases many of you folks have put out.  I'd like to try my hand at things myself and I thought a fun way to start might be to colorize some old Game Boy games just as Metroid II and Super Mario Land have by the community.  I'm leaning towards Kirby's Dream Land as my first pick.

I can't say I have any experience in programming really but I have at least done simple things in the past like hex edits and things of that nature.  I guess what I'm asking for here to start is suggestions on which utilities to use to best facilitate this project.  Many thanks.

Just finished the game. You guys did an excellent job! Looking forward to what's next.

Also I did this: http://villains.wikia.com/wiki/Lucifer_(46_Okunen_Monogatari)

I hope you don't mind but I took the liberty of cleaning up and expanding upon Lucifer's wiki page here a bit.  Definitely good work here though.

January 06, 2017, 03:55:15 pm - (Auto Merged - Double Posts are not allowed before 7 days.)So I've seen a chart of all of the game's evolutions floating around online, but even after beating the game I'm having a hard time figuring out which stat increases lead to which evolutions.  I understand from the manual that evolging by maxing out the stat that needs the *most* points leads to a vertical evolution, but for horizontal evolutions, what determines whether you evolve "left" or "right"?
13 Forgive me if this has come up elsewhere, but for me, beating the game with Zero in his normal red armor produces this result for the ending cutscene and persists in the credits as Zero and X are running through the city.  Beating the game with Black Zero or as X does not have this effect.  I noticed this in the 3.0 version as well, though I *don't* recall it being present in previous versions to that.

I noticed too that after beating Sigma and climbing the wall to escape the lava, the red in Zero's "Z" on his life bar changes from red to blue as soon as the game takes control of Zero's movement for the final part of the "escape" cutscene.  I can't help but wonder if these  two things are connected somehow.  Some sort of palette swap bug perhaps?
16

Am I missing anything without a translation yet of whatever might be on a disc 2?  Wasn't aware there was a second disc.

As stated in the opening post, the US version and JP version of Ace Combat 3 are very very different.  In order to fit the game onto one disc for the US release, Namco removed all of the story content (cutscenes, character dialog, and any semblance of an overarching plot).  In addition, the US version removed all of the branching paths in the game and their associated missions.  The JP version has multiple branching paths leading to five unique endings, as well as a few secret missions if certain conditions are met for various stages.

TL;DR You're missing out on a LOT by not playing the Japanese version.