Personal Projects / Re: Breath of Fire: War of the Goddess v1.03

If you had read the description fully, you would know that the first two fusions have been swapped.

Debo is now found in Guntz, and costs 10 AP. It fuses Danq with Gobi and Bild, but can only be used underwater. It is now available for use during a portion of the story in which you'll actually be underwater. Before, you obtained it after you were done in the sea and it had no purpose.

Cheyenne is now found in Gust, and costs 15 AP. It fuses Danq with Gary and Gobi, and like Gary, can walk through forests (As of v1.03). Before, no one had any reason to use Debo over Cheyenne aside from exploiting the Game Over bug.

Personal Projects / Re: Breath of Fire: War of the Goddess v1.03

Did something like a accidental rewrite for the fusion spells happen?
3

Wait wait.  So I have to just tank their unslaught of spells until they change form?  And then beat them, but not using spells?

To clarify, magic which does damage causes them to despawn in their true state.
If you use Luna's Polymorph, they become sitting ducks and can be defeated with conventual means.
4

They tend to selfdestruct, when attacking spells are used against them in their true form. But said selfdestruction is not counted as a normal defeat. It is more of a despawn.
5

Turned on sword orb farming and progressive weapon growth.  Yet I seem unable to get any sword orbs in the fortress.  Yes, I've found the room with the snowmen.  No sword orb drops, and I've gotten every other one.

They actually drop the Sword Orb, but only if you defeat them in a polymorphed state.
6

I really don't understand how armor equip in this works. so now if more than 1 party member can use the same armor i can only buy one? im stuck now with the girl having no armor cause it won't let me buy armors that the sprite and boy can use.

This was a optional component of the patch.
If you wish to play without it, patch a new file by disabling the component and give it the same name as the old file, so you can continue using the same save states and save files.
If you use save states, you may need to save normally ingame first and reset for the changes to become active.

Hello one more time, I'm glad to show you the current progress of this new graphic theme.

For the current animations I took the characters animations from Seiken Densetsu 3 as a reference (Hawk, Angela and Carlie)

I show you the frames sets with the game tiles, I guess they fit properly, but I'm not actually 100% sure about that, I use the SOMEDIT to take the references.
Any help about that would be greatly appreciated.
(the colors tiles are the repeated tiles, there are a JPG x3 and a PNG real size) On another front... Hi ManaRedux!

I think that the serious look is beacuse the pixel line in their foreheads, I think I fixed it by changing the bright. 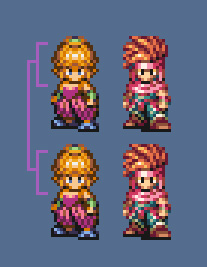 I'm still figuring out how work the other issues, but I assume this is about to play with the color palette.

As I said las time, anything of this pixelart work is liable to be change. Thanks in advance for the help and the responses.

If you aim to edit all existing sprites in SoM, I could imagine for later the usesage of the Secret of Mana IOS and the Trials of Mana tiles for the backgrounds.
Also if the IOS sprites fit in the assigned vectors for the SNES sprites, your work will be a lot easier as a result.
8

With the now super fast combat, charge attacks and attack spells appear less efficient.
I wouldn't mind, if the charging attack aspect was much faster and the spells more devastating.

Personally speaking the game reached it's greatest fun moment, when I fought the more difficult Dark Lich with 65355 HP and 255 MP. It was the best battle in the entire game, with all the good stuff the Turbo patch provided.

One question:
Have there been attempts to increase the damage cap for more powerful spells?
10

« on: October 21, 2020, 02:21:46 pm »
Strange, I heard that the opposite was the case.
Also IIRC in regards to what I have heard about the japanese version, the bosses after the final dream sequence, had low attack power, but ludicrous amount of HP.
11

I forgot who it was but there was a project a while back that was upgrading the battle sprites and *I think* also the backgrounds to bring them up to par with the GBA rerelease.
Also, that FF2 pseudo-remake Mato translated has upgraded monster sprites.
As long as you're planning on looking into using larger map sprites, how about a look at graphics upgrades in general?
It's low priority, but it would be a hell of a cherry on top at the end.

I remember that 8.bit.fan asked Gedankenschild for help in order to apply the expanded palettes of their mod to the Ultimate mod. As far as I remember Gedankenschild has been absent, for quite some time by now.
12

I wouldn't mind it if the re-translation was more of a script-port of the recent U.S. releases.
It would make Romancing Saga 3 feel like an updated version of the vanilla game.
The full package, imo.

One should keep in mind, that RS3's names and dialoges were changed for the localisation.

To compare, the word "Oblivion" in japanese has several meanings as substantives, according to Google Translate.

The 3rd Kyomu fits the most context-wise, since Google Translate also translates it as "Void", which is a common theme in the main final fantasy games.

If the japanese had the most approciate name reflecting the name Oblivion, it would be 無の化身 Mu no keshin, which means translated "Incarnation of Nothingness".

Have you designed the bonus bosses with the Demifiend bonus boss from Digital Devil Saga in mind?
If so, you need to adjust the options of the bosses.

It isn't a very pleasant experience to be literally crushed with a Dungeon Master's "Rock falls, everyone dies" attack after defeating 3 of 4 crystals.

The Demifiend on the other hand crushes parties at the start, when they are armed with complete immunities everywhere and can only be defeated, if you allow some weak points.

In any case, I am going to cheat at this boss, because I do not wish to spend another hour on it.
https://i.imgur.com/OQl5ua1.png?1
15

« on: July 03, 2020, 03:02:13 pm »
I recommend to speak with Moppo on Discord, there are many things he and the others discovered.
Also there are many QoL patches around, which he combined with the randomiser.

But in a nutshell, if you join hands with him, things will be even more smooth as a end result.

As for the Mana Seeds increasing your strenght, that is a global event, which empowers the enemies' attack stat as well.
16

What is the money called in Japanese?

I do not know, what the money was called in Seiken Densetsu 2, but in future games the currency is called Lucre.
Neither do I know, if it is a localised name or of the japanese original.
18

My current issue with Secret of Mana is not just the writing, but also the story being quite incoherent (didn't I read that on Redux? The seeds sealed/unsealed and needing to be sealed/unsealed). I don't know how much would need to be changed to make the story at least work, but maybe it's possible to aim for that? The Mana series' stories confuse me, if anything.

That is one of the things I love to see resolved in a proper fashion.
Also, there is this burning question I have for a while.
Why does our heroic trio go to the empire in the first place?

At this point in the game, we as the player lack a proper motivation in-universe to go there.

In Trials of Mana for example, we were always pointed towards the locations of the mana stones for to gather the mana spirits.
19

IIRC, you were part of the many GameFAQs discussions back in the day on the game's development.  I was a lurker on those threads, but it was part of the inspiration for my site, which indirectly led to this project.

I am interrested to take a read of those topics. If you do not mind, can you provide a link?

I am hopelessly ignorant about the rest of the Mana series.  My philosophy is more in line with Thirteen 1355, especially since the Mana games are only loosely based on each other.

Partially yes, partially no. Legend of Mana for example references both Seiken Densetsu 2 and 3, as it serves as a sort of mainhub, which connects all the worlds.
It is good, that dedicated fans brought the script to the web.
https://legendofmana.info/encyclopedias/world-history/

But the general gist is, that a portion of the games have their own universes.
SD1 and it's remakes is one such universe.
Dawn of Mana and Children of Mana form one, as well as Heroes of Mana and Trials of Mana.
However there is the implication that those four games belong to one universe.

In any case Secret of Mana is his own universe, but in any case we shouldn't ignore the connections.

Yes, but only from books and the remake, sadly.  Despite years of exhaustive research, I have never found any prerelease elements that can be realized, unless you count dummied animations/items.  A significant portion of one prerelease area can be reconstructed by joining screenshots, but it's still incomplete and we don't know where it fit in.  I think it was a test map.

I believe many unused elements can be found in the future games. Trials of Mana, Legend of Mana, Dawn of Mana... We only need to keep our eyes and ears open.

There is evidence that you were supposed to be able to start with the girl or sprite instead of the boy, similar to Trials of Mana.

IIRC Moppleton/Moppo's SoM Randomiser as of now allows to start the game with one of the three.

From prerelease maps, we know what areas looked like in development, but have no idea what was actually there.

We can only guess. But we reach the points through constant questioning.

Some have suggested that I "run wild" and expand the scenario based on what I know, but I'm sure you can imagine the complexities of such a problem are insurmountable, and the final product would be at best, depressingly arbitrary.

This can be done last, after everything else has been finished down the line.
20

By the way, are there any plans to make foreshadowing towards Anise the witch?
It is said, that she herself, always grows strong whenever Mana grows weak.
According to Dawn of Mana and Trials of Mana, she seeks to flood all worlds with the Dark Echoes of Mavolia, destroying them the process.
Pages: [1] 2 3 4 5 6 ... 12