It's definitely not LZ compressed from what I can tell.  It's also not an XBB archive like some of the other files in the rom.  I'm trying to find other archive types to try out, but so far I've had little luck.

Edit: I think there's some LZ compressed headers throughout the file, so I'm further convinced this is an archive of some sort.  Gonna keep trying things (and thanks so far).
June 04, 2015, 08:08:15 pm - (Auto Merged - Double Posts are not allowed before 7 days.)Okay, it looks like Crystal Tile 2 is able to split the file (didn't know CT2 could do this, never opened up a non-rom file with it before, hehe), and it looks like I can LZ decompress each of the individual bin files. 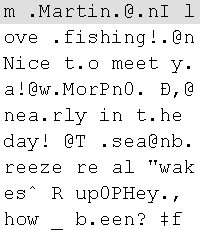 There are some obvious control characters (I can decipher line-breaks here and there), but there's also random null characters, and other stuff that doesn't even look like anything.  I thought it might just be some character replacements, but I've had no luck getting that to work.  Any suggestions?
3

My reasoning behind the name isn't too complicated.  The idea is that many fans of Harvest Moon have gone through their games, and really connect with certain characters.  Unfortunately, they have been unable to romance that character, and end up marrying someone else of the proper gender.  The mod, in essence, allows the player to marry their first choice (or "True Love") rather than settling for their #2 pick.

The name doesn't really matter.  I like it enough, and it's vague enough to make people take a look

Anyway, I'm still working on spriting the Boy version of MFOMT.  I'm pretty stuck on the script editing.  I can't seem to locate/parse the pointer table.  I was told to try some debugging tools, but I'm pretty green in that area.

(Trivia: Apparently Popuri is really popular amongst the ladies.)
5

I've been lurking around the forums looking for information on this and trying to follow through with the advice that others have given for their particular edits.  I want to edit the script for the GBA games Harvest Moon: Friends of Mineral Town and Harvest Moon: More Friends of Mineral Town.  I found Cartographer and Atlas with a pretty good understanding of how they work (I hope).  The problem I've come across is the complete inability to find the pointer table.  From what I read, it's supposed to be easy.  Can someone double check my work and see if I'm doing something obviously wrong?

I must be doing this completely wrong.  I'm not sure what else to do from here.
6

« on: January 03, 2013, 03:09:02 pm »
I'm starting to work on the boy version of the sprites, mainly because I'm kind of stuck on parts of the girl version.  I can't seem to locate the GBA pointer table, and the title-screen graphics are impossible to edit right now.
7

Falling in love is one of the most memorable moments in any Harvest Moon game.  Unfortunately for some, it always seemed like you had to choose between who you want to be and who you want to love.  I think some out there have been waiting for a game like this for a very long time now.

————————————
This is a request I've been hearing a lot, but so far no one has taken any action to create this.  Basically, all I am doing is replacing the Pete (boy) sprite with the Clair (girl) sprite from More Friends of Mineral Town.  Here's the current status

« on: December 21, 2012, 05:47:17 pm »
Hi everyone.  So I'm attempting a simple graphical/script edit for Harvest Moon - Friends of Mineral Town.  I was able to edit the sprites I needed changed pretty easily, except I can't seem to change anything on the title screen.  I want to add some version information (and maybe a custom logo) to the title. 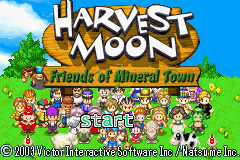 I suspect the title screen is compressed.  The background, the primary logo, and the copyright text at the bottom is not easily located in the rom.  I've tried unlz-gba and GBA Graphics Editor to "Scan" for compressed images, but all I get is junk.  Do any of you have any ideas on how I can edit these images?
Pages: [1]