« on: January 31, 2017, 10:45:37 pm »
About Alundra. I read that one of the miners was named Jaylen supposedly in reference to Jay Leno (the char's portrait somewhat looks like him), which falls in line with what WD is known for.
2

« on: October 24, 2016, 03:36:56 am »
Again I wonder, is "can play games" the most suitable wording? If he doesn't exhibit an unusual proficiency it may be better to ditch the 'can' and make it 'plays games'.
I mean, seeing an unlikely person being a gamer at first glance it isn't as much a question of 'can' but simply 'do'. I'm sorry for being overly pedantic, arguing about loose bits without having played.
4

such person -> such a person

What is that sentence even supposed to mean? Is it: Even a person with his duties can do these leisure activities. Or rather: Even a person with such diligence...
I wonder because I found it hard to imagine under what circumstances this line would make sense.
5

News Submissions / Re: Homebrew: Russian Roulette for the NES! (again) 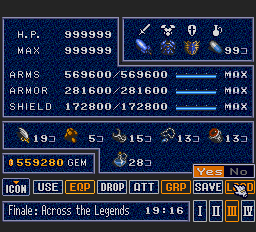 Where it says ATT the bar across in the 'A' sits too low, it is inconsistant with the other 'buttons' besides it.
Same goes possibly for the MAX to the right of ARMS/ARMOR/SHIELD, though it's not really as bad.
7

Please put me down as: casual

These shall be the introductory words to this new adventure.
9

Exactly that? Perhaps including a make-up feature as well.

« on: July 25, 2016, 09:27:29 pm »
So far this is excellent. You must submit it to the database, otherwise it may not get proper exposure or even be forgotten soon. Although you didn't complete your original vision for this hack, what is there is great; it's clever, attractive and even sort of 'funny' so it deserves a spot. I also enjoy this new mood uncommon for a Mario game. Where did you get the music (main theme, game over)?

As of now I've completed what you depicted as the 'best stage'. The next stage after that is really hard. I'm almost out of ideas, so I even tried to carry over the star's invincibility effect from the previous stage into this one, but it seems travelling in the pipe cancels the effect.
11

« on: April 24, 2016, 09:16:54 pm »
Dr. Knitt Witt may not be a remarkably clever choice for a name, but your suggestion is no better fit. The original name being Arewostein (phonetically) was supposed to be an allusion to -- I assume -- Einstein (who was no inventor or engineer, but still). Whatever actual meaning the pun has to a Japanese person is the most unimportant thing in this translating matter. The point was to distort a famous name to funny effect. It would be hard to replicate that in English in the same way, it seems the language doesn't lend itself as well.
If he had a name in Wario Land 4 that one would be the best choice.
13

Personal Projects / Re: The Joy of ROM Hacking Video Series

« on: April 22, 2016, 07:32:22 am »
About that tile-editor. Why can't the drawing field consist of four tiles (2x2)? That way you wouldn't have to guess where pixels meet at the borders.
Also how about an ad hoc preview animation? There were the three congruent frames of the running animation, so it shouldn't be hard for the program to build a preview animation from that; having to play the rom for an actual examination is asking too much.

Rom-hacking has existed for +20 years, how can this be so impractical? Is this really as good as it gets?
15

« on: March 12, 2016, 02:12:48 pm »
But that is really as bad as it gets. Apart from these I felt it was about perfect; it made sense and was understandable.
I can confidently say that there were these three major jarring typos, and if(!) there were any others they must have been so harmless that they easily escaped me.

I wonder why this example surprises you just now and worsens your estimation of the overall work. I mean, you said you played the game, what did you actually notice(supposedly grammar-wise)? You have to be more concrete.
16

The video begins with the dialogue I mentioned. Firstly, 'afright' is a really bad mistake, something between afraid and frightened, your choice -- after that it should be young'un instead of youg'un.

Spoiler:
I also mentioned how the shopkeeper replacing Riding Hood exhibits the same speech impediment. I was unsure of it really being a mistake, I guess it's supposed to be mockery. But then again, why would he do that if he's pretending to be a good guy?
17

« on: March 11, 2016, 09:16:49 pm »
And why should it be Sablé, do the katakana say so? Does it mean anything?
In the end I thought the hero is "Prince of Sable" because he has somewhat darker skin; and if you examine his sprite closely you can see he differs from the others.
Spoiler:
O racist me!
18

News Submissions / Re: ROM Hacks: Time to test your IQ

I would have prefered to play on 3DS but it was only a minor hassle to run it on a shitty laptop I had around, even the "problematic" Snes9x worked for me.
I don't blame Puzzledude for what he did; if a product has quality I'm willing to overlook this.
I respect that he has his reasons, although he'd do well to free himself of his grudges.

I got the hack earlier today and had an enjoyable session. There is a noticeable gap in quality though.
The first dungeon is some really lame bullshit. When I played that I thought: this is it?! Is that a joke?
It being the first dungeon makes for a bad show-case; I'd even say it oughta be cut.
Puzz, I assume you'd agree that it is the weakest part of the whole game, no?

The second dungeon was also massively annoying but it was still somewhat interesting.

The third dungeon was what I've been hoping for, excellent work there. I just now obtained the hookshot after a glorious march through that maze room; I failed that maze several times because I falsely believed some of those doors/fences were red herrings(as encountered in other logic games), but in the end each element had its purpose.
At times the bulldozing of watery trails got bothersome; it was too much work and too many moves to accomplish obvious goals, which was especially painful after restarts.

One more thing about water and boxes: Did you know that boxes can be pushed along a shore when the box is in the water(and therefore presumedly should be illegal to be moved) if Link has one foot on dry land?

It only works if the shore is horizontal with water in the north and land in the south.
Did you account for that, Puzz? I only noticed it very late, but this probably makes the game easier in parts, or could possibly even break some puzzles.

Personal Projects / Re: Nora and the Time Studio: The Witch of the Misty Forest – English Translation

Of course one view shouldn't be rotated the whole 90°. What I believe could be a convincing illusion is if (for instance) the north-view is rotated 45° and for the remaining 45° it switches to the west(/east)-view.

I made a gif; you can decide if it proves or disproves my proposition. I inserted only two transitional frames but it already looks less disorienting.

The hero-sprite should remain static during rotations if this were to be implemented.

The question remains if this is even technically possible though.
Pages: [1] 2