Text only | Text with Images

It all started when I was looking for a new, preferably small project to sink my teeth into after the Sailor Moon Another Story relocalization was finished. Then I remembered that, unlike its sequel, the first Sailor Moon beat-'em-up was still untranslated. Being much more barebones compared to said sequel also meant it had precious little text, most of it in the ending subtitles and credits/character biographies. So in March 2020 I set out on the journey to translate the game, while FlamePurge offered his advice and help with various localization aspects and graphics. After some initial progress, I've hit some snags related to how the compression worked. Then a certain global event happened and so a half-finished project waited for better times, which thankfully arrived in 2022, fresh off the heels of the Sailor Moon Another Story MSU-1 project.

I dusted off my files and got to work, first on the ending subtitles, for which I decided to forgo implementing a VWF routine and go for a pre-rendered approach. The way the game was laid out made adding separate tilesets where needed a breeze. Then I proceeded to translate the opening credits roll. The most tedious part by far was the score screen after completing a level, which required a lot of careful work to get the tilemaps just right.

Eventually, after working on it for a few weeks straight, I was able to insert all of the translated text, tilemaps and graphics and not have anything explode. A lot of this time was spent on minutiae that no one except for FlamePurge and I might notice, but I wouldn't have it any other way. All in all the game was pretty easy to work with, a few curveballs at the eleventh hour notwithstanding.  What was supposed to be a short and sweet side-project took a bit longer than anticipated, but hey, here we are. In the end I've had fun, so I hope you Moonies enjoy the end product!

Incidentally, this wrapped up just as Usagi's and Chibi-Usa's birthday, June 30th, was around the corner, so what better way to celebrate, right? 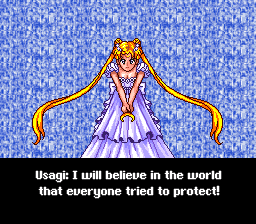 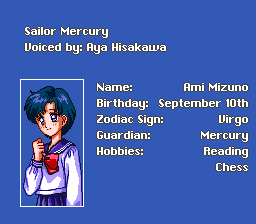 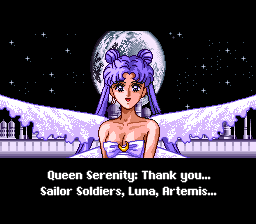 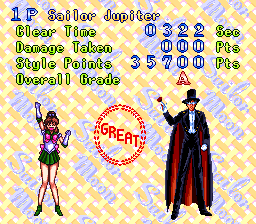 But congratulations.
Title: Re: Pretty Soldier Sailor Moon English translation v1.00
Post by: mziab on June 30, 2022, 01:33:02 PM
I've taken a look at the French version, if only briefly. The title screen logo (and the Another Story one we used for the relocalization, for that matter) is based on the French one, actually. A native speaker of French like Hiei- could probably share more insight, but from what I've heard, the French localization is generally not thought of as very good. I don't speak French, but I did notice that the first stage was called the "Latin Quarter" instead of the Juban Shopping District, so I guess some liberties were taken, huh? ;D Although that might be in line with the French localization of the anime, for all I know.

EDIT: Two bugs have been reported and fixed:

The first is a hidden Nakayoshi difficulty option that was left untranslated. It's a small wonder this had managed to stay under the radar for decades. Thanks to alex_tenjo and Zanemato for the info.

The other bug relates to the initial voice clip being cut off by a split-second, which was actually caused by the new title screen loading quicker than the original. Thanks BokuNES for reporting. The readme now documents two secrets in the game, including the hidden Nakayoshi mode, courtesy of FlamePurge.

Time to play this game again (which I haven't in several years now  :P )
Text only | Text with Images