Translation of Final Fantasy I for Nintendo NES to Spanish, made by Rod Mérida / Crackowia

Traducciones Crackowia is proud to announce the release of their translation of Final Fantasy 1 for Nintendo NES to the Spanish language. Made by Rod Mérida, with the contribution of LuisCoco, from Venezuela, as programmer of debugging tools for detecting wrong pointers and text overflow issues in dialogs, this translation was started in 23rd January of 2001, and few time after abandonned. This snapshot, recovered from an old CD-R that contained a backup of the author’s 3.2 GB hard disk, could be a proof and remind of those days: https://crackowia.com/imagenes/FF1-2001.png . This project was rescued from oblivion and continued twenty years after, in 23rd November of 2021. It was almost completed after three days of ROM editing and testing. Now, thanks to the contribution of Crackowia team’s programmer, it has been debugged, finished and released. This patch even fixes a bug contained in some FF1 dumps from 1997 whose SRAM, or saving function, was disabled and doesn’t properly load saved games in many modern emulators and real machines, so with these dumps, this translation correct that issue.

The translation itself is totally faithful to any editorial aspect present in the American ROM of Final Fantasy 1, like the use of capitalization as a form of underlying, for some key terms of the game.

This contribution may be considered to be an excellent chance for Spanish speaking fans of the series to go back in past to the very first Final Fantasy, that saved Square from bankrupt, thus contradicting its own name.

Further information about the translation process may be found in this article: https://tradusquare.es/10983-2/ . 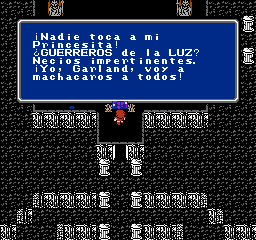 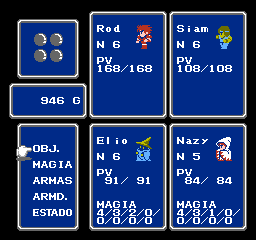