The long awaited sequel arrives. Take to the ice and destroy your opponents, however you see fit.

This is a localization of the title screen for Ike Ike! Nekketsu Hockey-bu. While the game has been translated previously, and even now officially released, the title is excruciating. The point of this translation is to make a title screen for the game that would have come out back in 1993 if Street Challenge had a warm reception. 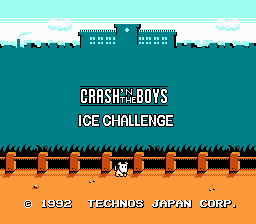