“Taiyou no Yuusha: Fighbird”, aka “Brave Fighter of the Sun: Fighbird” is a shoot’em up game based on a mecha anime of the Yuusha or Brave series. (Protip: use Select in some instances in the game). The game is super easy when you acquire the level 3 homing missiles (which is OP).

The author decided on making an English re-translation of this obscure Japanese game because the previous group did not translated some of the game’s texts (i.e. the part when you did not rescue the people then the Doctor says something about it; while some untranslated texts were simply unused).

Before, the author wanted to make a bugfix/addendum patch of the translation made by Dragoon-X Translations (DXT). But the translation took liberties on its own without much reference with the anime counterpart. And there were messups with the hexadecimals that made some palettes on the talking heads glitchy. And there’s the notorious misnomer of “Kenta”, which DXT (and PL Translations) called “Kesota”. Understandably, they mistaken “n”, [ン] with “so”, [ソ]. The names of each member of the Baron Team is used instead of the regular vehicle names. And there’s their title logo, not gonna touch it because its cool. Eventually, the author made a fresh start with the original ROM.

Note that the author rendered a nice and new title logo and mini in-game logo :)

Taiyou no Yuusha: Fighbird GB has the same game mechanics as the NES version, but here you mostly play as Fighbird alone. 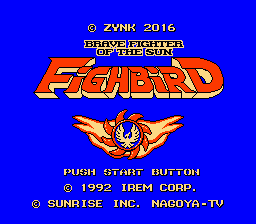