Chrono Trigger Soundtrack Expansion is a project compiling the work of 6 different romhackers that adds 12 additional songs to the SNES version of Chrono Trigger. These songs are compiled from unused data in both the JP and US roms, the Japanese Pre-Release rom sent to magazine reviewers, and the PSX/DS rereleases. For the 5 songs that were never previously on the SNES, new arrangements have been done to fit the music within the limits of the SNES soundchip, while still sounding like full songs. All of the music is playable on original hardware.

Version 1.0 was a hack for romhackers, simply packaging all of the data together into one place. Version 2.0 is for gamers, placing all 12 songs at logical places in the game. Instead of toneless wind on Mt. Woe, you will now hear “Scattering Blossoms” from the PSX version. Keeper’s Dome has its unique music restored from the Pre-Release rom. Death Peak plays the beautiful but haunting tune, “Singing Mountain”. Custom code was even added to the game to switch out the random battle music halfway through the game from “Battle 1″ to “Battle 2″. 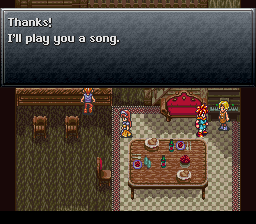