Strobenz has released his first ROM hack of the Lode Runner [Color] series. Using the Lode Funner tool made by Disch, 41 of the 50 original levels were completely remade, while the other 9 have been tweaked to be harder than before. Lode Runner Blue itself is a challenging game that requires the player to have advanced skills so they can beat the entire game!

Lode Runner is a simple game; the goal is to grab all pieces of gold and escape the mine. To do this, the player is equipped with a ray gun that digs holes on bricks. Digging such holes is essential for the game to be beaten. There’s at least one enemy in each level, which the player must either avoid, trap in holes or use as a tool to reach all of the gold!

The original game itself isn’t really that easy, and Lode Runner Blue takes it to another level by featuring up to six enemies on each level (instead of the regular three), plus complex and difficult brick arrangements, especially on the final levels.

It is strongly recommended that you play the original Lode Runner first if you’re unfamiliar with it, because Lode Runner Blue can surely be frustrating at some points! The last three levels are the most difficult ones in the entire hack! Think you can get that far and beat them? 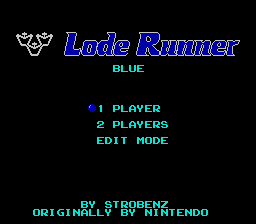 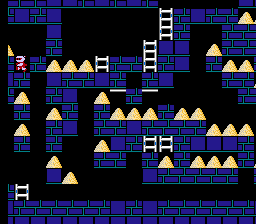