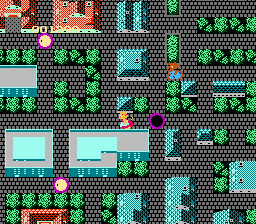 Castlevania: Aria of Sorrow is an action role playing game for the Game Boy Advance.

Aria of Sorrow brings us back to the Action-RPG stylings that started in SOTN. You play as Soma Cruz, someone who is lead to Dracula’s Castle and finds out that he has the ability to control the powers of demons.

Not only do you have an equipment system allowing you to get new weapons, armor and such, but you also have the Soul System. This system allows you to gain the powers from all the various demons you will fight in Dracula’s Castle. There are four types of souls you can get: Bullet Type (those that give you a sub-weapon like ability, costing small amount of MP), Guardian Type (those that call upon the demon itself to give you an ability, costing lots of MP), Support Type (those that just add to your stats or give you an ability, but do not cost MP and are always active) and Ability Types (those that add special abilities, like Double Jumping).

Full translation for Brazilian Portuguese, with new accented characters and all graphics edited. Some graphics were improved, in order to avoid unnecessary abbreviations.

The translation was based partly in the Japanese script, combined with new terms from Dawn of Sorrow, in order to maintain localization consistency between both games.