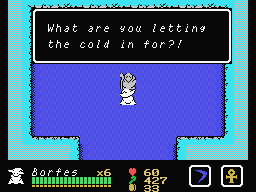 The Legend of Zelda: Oracle of Seasons

Like Majora’s Mask before it, this game takes from a predecessor and introduces players to new world. In this case, the base was Link’s Awakening, although there are various changes to the engine. This game is the counterpart to Oracle of Ages and both are required to play through the final segment of the story. They can be played in any order.

If you’ve played Link’s Awakening, then you know how this game works, although not all is as it seems. You can’t combine items (so no bomb arrows) and characters now seem to have an extra z coordinate (so you can’t defeat enemies that are hovering around you without jumping). You can’t attack while keeping your shield up. It mostly recycles the items from Link’s Awakening, although it still introduces a lot of new ones, like the Cape.

There’s not much to say about the graphics. It’s all basically lifted straight from Link’s Awakening. There’s a lot of new sprite work, though and it makes the game feel nicer and more vivid than Link’s Awakening. In this Oracles, each screen of the overworld has a different tile set to reflect the season, which is a very neat touch, even if it is the point of the game.

This is a complete translation for The Legend of Zelda: Oracle of Seasons. The patch covers all dialogues and graphics in the game.