« Last post by Jiggers on Today at 03:38:55 pm »
2) Oh, I mean skills. Counter-Skill has to fit inside the shop inventory box. Support abilities... yeah, those only have to fit inside whatever menu screen we design for them. Or if there is like a support ability shop, I can name the ITEM something else, have the description explain what it does, then use a different name in menus and battle messages.

6) "Bzt! Auto-Veil Activation: Engage Re: Protect" ... its only 15 lines longer than the screen. Will I make horizontal-scrolling battle text just to joke around with Mecha Warriors of Light? Its possible.

Oh man, I want to keep the peninsula too!
22

This Alundra patch hasn't been uploaded to RHDN's hacks section. I also found a Landstalker controls patch by MIJET (was hard to find). MagicianLord's edited version of said patch is broken. Can I get permission to upload Supper's and MIJET's work to the hack database? It makes these things so much easier to find, and I'd say they're well worth making use of.

Thanks for notifying me of this, I had no idea a control patch for Landstalker was available. I would love to get it if possible.
24

« Last post by tygerbug on Today at 02:36:41 pm »
My point was just that the peach color is standing in for both white and some flesh tones, and it's probably more important that the white parts look white. (Eyes, shoes, gloves etc)

He has a similar design to Felix the Cat who was black and white (and had two NES games).

But your choice obviously.
25

« Last post by sics on Today at 02:29:29 pm »
Queue
First, if I had all the answers, I would not open a query thread, secondly, it is a bit ironic that you tell him that his opinion does not count since I owe him indirectly to have been able to carry out the new title screen and lastly and most importantly, the Picture made me laugh anyway

You can modify nametables in NES Screen Tool.

Export your nametable for any scene from the Mesen emulator's Memory Tools. 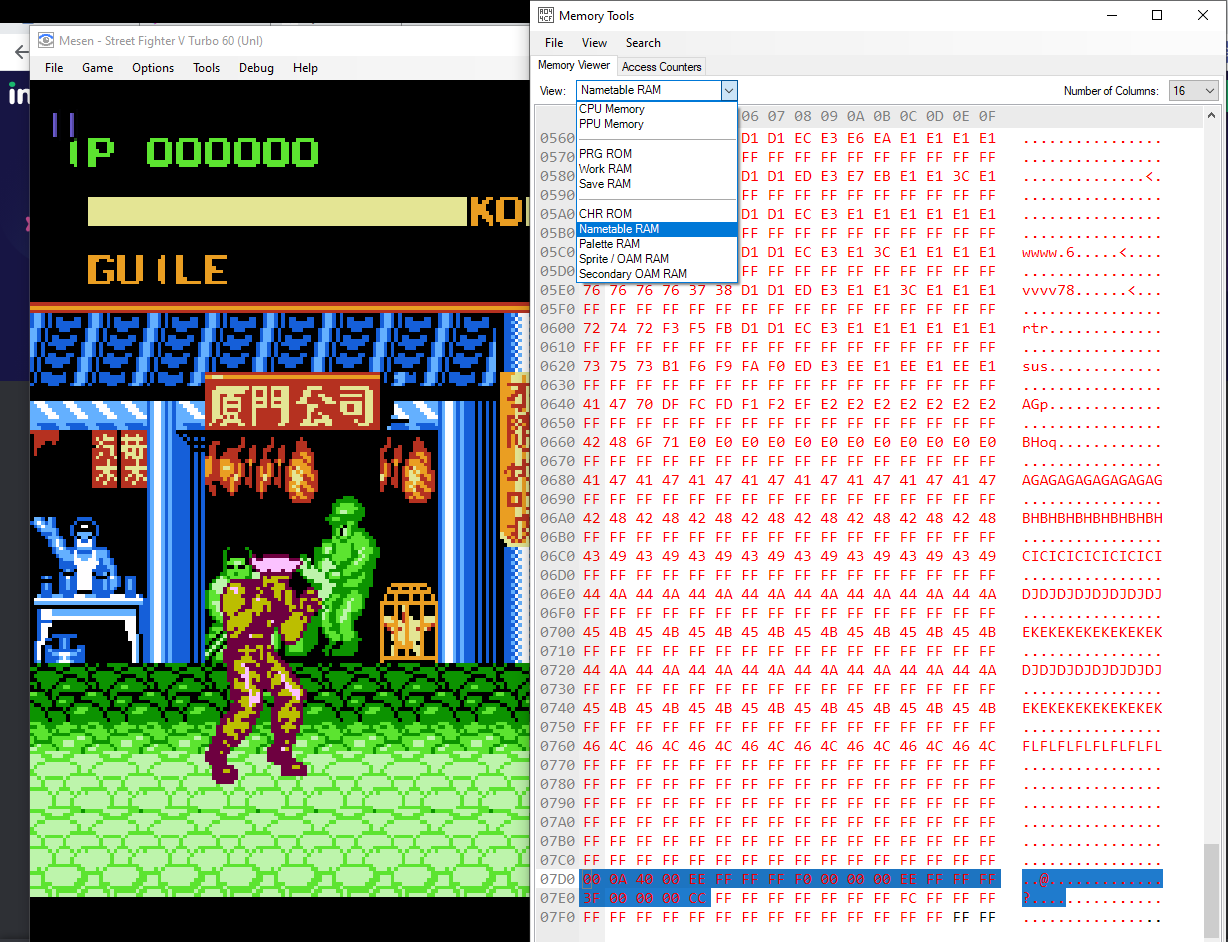 Here I am looking at Nametable RAM, including what looks like the palettes at bottom. Save the nametable RAM as a file.
Open this up in a hex editor. It's twice as big as it should be. Delete the second half of the file from 400 onward. Rename to .NAM.
Import CHR graphics into shiru's NES Screen Tool. Open your NAM file.

Recreate your palettes manually I guess.

At this point you can alter your background sprites and palettes, and save the results to be copy/pasted back into the ROM later. You can also create onscreen sprite displays as a metasprite bank.

You can use NES Screen Tool like a drawing tool here, placing tiles and palettes. Check or uncheck "Apply Tiles" and "Apply Palettes."
The .bin data you save when you're done can be manually reinserted into your NES ROM in the appropriate places. 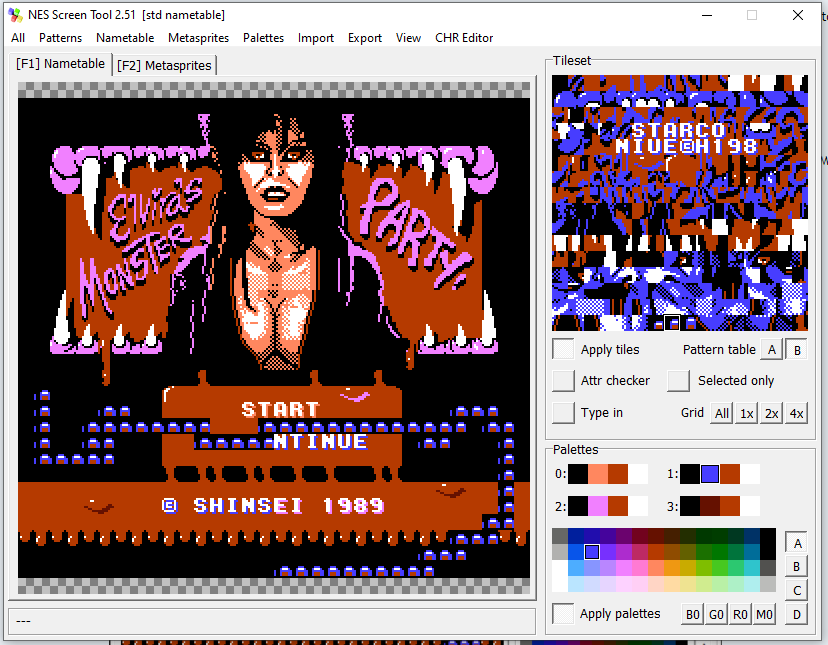 In Mesen (or in your old DMP file), copy a few bytes/numbers from the unaltered nametable and search for THAT in the NES file.

Find this data inside the original ROM in a hex editor.

(Either in a Hex editor or in FCEUX's Hex editor. Open up Debug/Hex editor/ROM file, you will be able to see your changes in real time. I suppose Mesen can do this too.)

You have found the Nametable for this scene inside the ROM.

You may be able to simply copy/paste your new/altered Nametable info directly into the ROM (from the .BIN file you exported from NES Screen Tool, or from an .MSB if you were working with sprites).

However, the code in the actual ROM may be different and more complex than that - there may be extra commands which jump around the screen, like maybe a three-byte command on every line break, or commands which seek to a specific point onscreen.

So you may need to make changes to your code to account for that.. Compare your new code to the old hex code.

Try this in FCEUX's hex editor, while working with the CHR ROM. See if you're breaking the code by pasting in the new code.

(It depends on the ROM!

They often have some extra code which you have to work around, in the actual Nametables.
Maybe an extra three bytes before every line of sprites, and an extra three bytes in the middle of the color palette at the end.
It's not too hard though! Just something to look out for, and add to your new code!)

Although I did not use the method described by him, I put my eyes on "NES Screen Tool" and realized that I could use this tool in a similar way to what I was already doing with Tiled, this literally opened up endless possibilities for me, now I can have in hours what used to take me weeks

By the way, next time you say I know what I'm doing, keep in mind that I was about to add versions with the following designs:

tygerbug
I am honestly not convinced by the idea of ​​using the white color, since it would stand out much more than the other colors, so I could not integrate it correctly in the current sprite.

On the other hand, if the conditions to edit the characters improve, I would like to continue experimenting with Sonic's design, for example a while ago I adapted the design of another artist in a style similar to that of NES (Although at the moment without taking into account the actual hardware restrictions)

« Last post by guppy on Today at 02:26:54 pm »
With the item cycle glitch, I notice that it works properly once I get the boomerang; the boomerang seems to fill the 0th B-item slot in your inventory, so something about that slot being filled seems to be the key.    Maybe the code is checking to see if the slot is empty before moving the selection cursor there...
27

Comic Sans?! You are kidding, right, Demille-san? I wholeheartedly think that you should use the nice font from the great game Mario & Luigi Superstar Saga!

You're right, I AM kidding

these are merely placeholders, after all. Once a real artist with truly magical hands has their way with them, it will be beautiful. Sadly, those hands are not mine - perhaps the final Super Kid, Chekkit, would be willing to lend one of those hand/wing things to our cause... 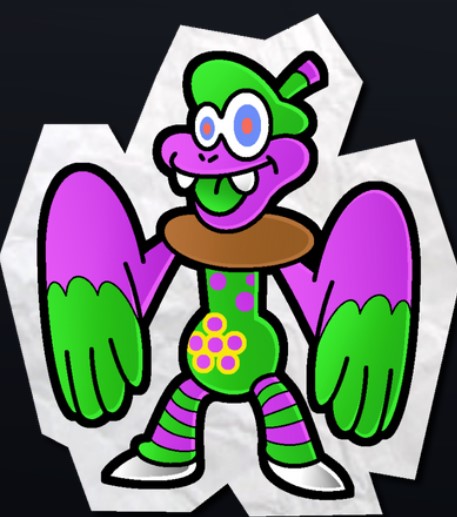 « Last post by Mattiac on Today at 02:16:03 pm »
Comic Sans?! You are kidding, right, Demille-san? I wholeheartedly think that you should use the nice font from the great game Mario & Luigi Superstar Saga!
29

« Last post by Pennywise on Today at 02:11:15 pm »
I've fixed that little issue and it has been submitted to the site. You can wait until it gets or approved or brave the mess that is my website to download it sooner.
30

I updated to 1.1, and I do like the new font better. It's too bad the LTTP font has spacing issues.

About the triforce graphic glitch, I didn't think to create a save state, but I'll see if I can re-create the bug, and if so I'll post a link to it.
Today at 01:55:35 pm - (Auto Merged - Double Posts are not allowed before 7 days.)Here are two save states for debugging:

Another glitch:  If I have Bombs, Prescription to buy medicine, and no Boomerang in inventory, if I try to cycle through my B-items using Select, it gets stuck on the Prescription, and will not cycle through the rest of the inventory.

For the Triforce glitch - I think I see what's going on. I should be able to address it fairly easily.

For the item cycle glitch - I may need to ask ShadowOne333 for help on that one. I'm not sure if the same issue is found in Zelda 1 Redux or not. But, I'll ask if it sounds familiar.