News Submissions / Re: Translations: Dragon Quest I + II in English fully bugfixed, finally, after 20 years, how it mus

There's just no definitive version of DQ1 and 2.

Because of "Dragonlord" there is no definite version?

Now I know why lilpuddy31 seems like he/she wants to bow out.

Lilpuddy31 has not bown out anything.
For this little thing she or he has suggested me and I've not agreed I have fixed like 30 other bugs or typos reported by her or him, just in Dragon Quest 1. Including one that doesn't let you save the game after reaching maximum level (level 30), that I think is much more important than that nonsense of using just one only synonymic instance for King Dragon in the whole game, due to the interference of an alternate version of RPGOne's patch with DW localization.

So, then, according to you this patch is an arbitrary crap because I just fix malfunctioning glitches, garbage letters, Rolando being cloned and erasing the princess from your party (and from the game), wrong text pointers, game breaking mistakes while copying/translating a dialog control codes, wrong variable codes for names and even for the price of an Inn that showed experience instead, no random name generating system, an untranslated ending in Japanese, Gwaelyn instead Laura, an item being mentioned in your inventory like a completely different thing, the vault erasing your stored money if it exceeds 65536 and all that.
And just because in one instance I decided to respect one damn synonym that adds literary quality to the script, even if originally was due to a typo, this patch deserves to be thrown to garbage.
I like the logic you're handling here.
44

OK, I'm judging from that reaction that the group has given up already. Most unfortunate. Game deserves to be better polished

No, we have not given up anything —This evening I have sent another update—. It's just a valid synonym for King Dragon that appears in one sentence in the whole DQ1. I like it, and wanted to leave it unchanged as a matter of editorial respect to the original RPGOne's script, since it's not even a bug or glitch, or malfunctioning, and it has some philological/historical value in ROMhacking scene. It's not Gwaelyn and that stuff that has nothing to do with Laura, for example, that we did replace. It's not a typo. It's not characters' names being reversed in DQ2. It's just refering once to King Dragon as Dragonlord for adding a little of lexical variety to the game, even though it was originally due to a mistake this people made in 2002 when doing two versions of the same patch. What for you is "just a mistake", for me it's archaeology.
45

"It looks far to important."

I am enjoying this patch so far.

News Submissions / Re: Translations: Dragon Quest I + II in English fully bugfixed, finally, after 20 years, how it mus

You're not wrong my friend. Between me and yourself, he's been harassed enough

The light that burns twice as bright burns half as long.
And you have burned so very, very brightly...


If as it seems and has been announced Byuu is dead, it's a pity, and I want to remind and commemorate his contributions to the community while he lived. For example, he was one of the main machine code programmers for the Dragon Quest I & II translation from Japanese to English, made by RPGOne Team, that I have had the honour to translate to Spanish and bugfix, and whose bugfixed edition in English language I've been amused doing these days; something that wouldn't have been possible without his previous job. 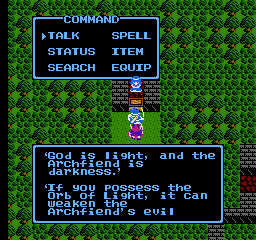 Ah, so this is the result all the intense scrutiny, dedication to authenticity, and a completely transparent disdain and hatred for the work of other localizers (be they working at SE or amateurs such as yourselves).

*Plas, plas, plas*!!
Such a gibberish (what in Spanish we call "un galimatías")!
And they complain about "gibberish" and "pruns" in the other translations.
I've not been able to understand even a single word there, let's not say to match each spell with its normal English or even Japanese counterparts.
This is not driving reversed!, this is doing a GTA directly!

When a version adds new characteristics to the main list, that are not includable in the list above, I put them after these ones so the reader may discover them quickly and he really learns to appreciate the achievements of this patch in its full extension.

Anyway you sort of made a point; let me think a little about how I could re-order the thing for next readme update.

June 28, 2021, 12:37:03 pm - (Auto Merged - Double Posts are not allowed before 7 days.)By the way, in case nobody has noticed, there is a new update of this patch (1.05a) that removes the so controversial automatic spinning in the famous cracktro splash screen (that is optional since version 1.03c; it requires pressing SELECT in the static splash with DQ2 art to be activated).

but it looks like status effect messages (icons?) are broken in the English one.

That's a really tough one.
I'd say it happens more in battles than in the field menu, since it doesn't happen with all altered effects, and effects where it does, like "sleep", finish once the fight is over.

The difficulty of fixing this is how to find them inside the ROM, since they're either isolated letters, or non-alphabetical characters.

For example, "sleep" symbol appears sort of like " g’ ". How am I supposed to find that?
There is another that appears like "W". But you can't imagine how many "W" bytes appear during the whole DQ3 ROM, even as part of the SNES machine code.
It's crazy to try to find that just by searching or looking randomly. It's a 6MB expanded ROM, that is: around 6 million characters.

So the only solution left would be through debugging, but in game debugging a single character printing that won't happen whenever you want in the battle is really difficult.
Honestly, I don't if I will ever be able to find and change this.
At least if these broken symbols didn't correspond with letters from the alphabet I could redraw them.

If anybody has a clue...

All these re-translation are God awful terrible with maybe like a 2% chance of them being good (like the Ryusui BoF one for example).

I could not agree more!!

and hope he sticks by it!

I swear I will!

More people need to do what Rod does here and just stick to making them fully playable without glitches.

I hope to be preaching with actions.
53

1/10th of them, and usually when there is a pun in Japanese, it was ironically rendered without a pun in these new translations

How exagerated you are! You don't like the slightest improvement over the original in a translation!
What kind of hardcore Japanese fanboy-ism is this?
You are the kind of people that would replace "son of a submariner" or "welcome to my barbecue" by "bummer" and "burn 'till you die" (making it loose personality and bright)!

« on: June 27, 2021, 07:15:38 am »
How you don't want me to laugh, you both have over reacted, calling me selfish and "thief". It was completely unimagined, and unexpected.
Really, those laughs transcriptions are a 2% of how they are in real life right now.

Square-Enix would be smart to pay us, if it wasn't for the fact that the mainstream English audience has become entirely addicted to their constant artificial puns and ridiculous accents.

It's for the best that you leave the errors related to lack of thought, lack of gathering context, so that the translation remains what it was.

So you may find a self-justification to make your rewrite, no?
Because I guess there's not much more than those little things left, and I have removed you one of them without noticing, Lol. Just by not leaving a word in row Japanese and putting something.

You're funny, guys.
You want to have the full collection of Dragon Quest's made by yourselves, Lol.

At least if you were Welsh, northern Scottish or something you could translate them to Welsh, Gaelic or something like that. Haha. That'd be very interesting.

« on: June 27, 2021, 07:02:03 am »
I didn't change it because I was not focused in changing the script, just correcting glitches, and I had not noticed there was that untranslated name (that anyway I had translated months before to Spanish with no complication). In the moment I notice I start searching for the most suitable translation. I know already Me is Eye in Japanese, and Tama / -Dama is ball, so Eyeball, a little shortened, makes all the sense of the world. I just doubted about what spelling was better, and more understandable, either Eyebo or Eyeba.

You behave like Eyeba is so obvious, but the fact that Meda references the word for eyeball is not so obvious to your typical fan translator who relies almost completely on dictionaries.

メーダ
It's obvious since the moment that "da" ダ appears written in katakana and not in hiragana だ, as it would be mandatory if it was a normal Japanese word.

What is the criteria you use in what to change versus what to keep? I really don't think there is any criteria...

Whatever non-translated (in Japanese), and whatever glitched. I think it's clear by taking a look to the readme, and the list of corrections.
What doesn't include changing gods to God, nor Stones of Sunlight to Stone of Sunlight, for example.
58

Yours is also my alternate translation for the enemy Medalord like Eyebalord (that you have never mentioned in this forum)?

I do have capacity for coming up with those names by myself. I did it constantly in my Spanish translation. Why would this one be different if I see a Japanese name had been left untranslated?
59

« on: June 27, 2021, 06:24:11 am »
What!?
For a word I translated myself looking up in dictionaries??
How come??
It'd be even offending to mention someone just for a word!!
And how many other people have ever mentioned me things that I've fixed without being officially in the team of betatesters of the project (what implies playing the whole game and continuously reporting me whatever error they see even with screenshots! Those are the people I'm mentioning, due to matters of space, brevity and many other factors!)

Your fickleness and ego really is insufferable at times.

This is surrealistic, seriously!
Am I dreaming??
60

I'd appreciate if you remove Eyeba and substitute in an official name for that monster. Or make up something yourself.

Hahahahahahaha.
I just saw that enemy name, Meda, was untranslated, what makes no sense, and following my current criterium of translating whatever Japanese text remained untranslated in RPGOne's translation (since my patch intends to make it fully playable), I translated it by what I considered is its most equivalent translation, that is Eyeball, by removing some letter in the tail, since the name Meda is a cut name in Japanese, too.
So it's not "our translation". It's the translation.
And I didn't have much space avalaible in names strings for putting something else, anyway.

So there are not many other choices.
Not that you have invented the only possible translation of that word to English. You're going to patent the dictionary?