« on: May 25, 2020, 10:08:28 am »
LightBaneX Yeah, kinda agree the boy having nothing to stand out among the 3 players till the final battle is bullshit. Wouldn't have hurt the original game to have given him some spell that fits him thematically, like the saber spells maybe, but I have no clue if it can be done something about him anymore if it wasn't done originally.

I remember my first time I got Undine and thought "oh now my characters can use spells, how awesome", except the Hero, that was quite the letdown for me as a kid back then, nothing to stand out.
22

The story and the voice acting tho is something else entirely, better not talk about that lol.

Really wish they would have fleshed out SoM a lot more with the remake, in every aspect, they missed the opportunity.
23

This was just a maintenance release while I work on the Script Augmentation Project.


Mr X, I'll look into it. A preliminary check showed no changes to how it functions (when you name the girl and sprite is when it sets their default element levels, and it looks like the code that does so should be functioning), so it'll require I dig deeper. It's especially weird that it seemed to partially work.

This update seem to work for both so far, just got gnome and as inteded both the Girl and Sprite got him at level 1.
24

I set Gnome to be level 1 and Sylphid level 2 as deafult but the Girl got Gnome at Level 0 while Sylphid at level 1, while Sprite got them as intended.
25

Queue already mentioned that Saber magic has no effect on bosses, since their melee attacks have their own separate "stats".  So giving Hex saber magics would be meaningless.

As for Evil Gate and Hellfire, those are Queue and kethinov's patches, so I will not modify their magics.  Besides, I don't even know how to modify their magic, since those are some complicated stuff that I can't even begin to touch.  I may create my own version of Evil Gate though (maybe), since I really want to make Black Curse spell from SD3 (I'll be using Shadow Saber though, since I like Shadow Saber a lot, but NPC can use my new version).  I'll have it cause All-Stat Down + several SEs.

Okay, I have a lot of updates:

[Enemy_Stat_Changes] -- please add this at the end of my previous codes.  I'm giving extra experience in the beginning third of the game).  Maybe make it a sub-option for those who don't want this?
Code: [Select]
' ---

[Alternate_Transform_List] -- I changed things around, so Mimic (who is actually a lot stronger than its level suggested) and Weepy Eye isn't included in the transformation list.  I instead gave Silktail, since it's the mascot of the game.  And I changed things so Chess Knight can be included here.
Code: [Select]
@OFF $C8E5F3 ' Rabite --> Ma Goblin (aka Goblin Guard)
RAW 0E

[Spell_Balance_Overhaul] -- I'm not sure why, but it seems that you disabled Herbal Boost to multi-target (even though Moon Energy is multi-target).  Was there a reason for that?  Or was it some mistake?  Or did I ask you to do that, and I somehow forgot about it?  In any case, could you please make it multi-target?  Thanks.

IF [Magic]
IF Spell_System_Extensions
IF _Lunar_Magic_-_Celestial_Cascade ' compat
@OFF $D090EB ' Gremlin Freeze --> Lunar Magic <------ I want to see more Lunar Magic, and Gremlin seemed like a good candidate.
RAW 1A
ENDIF x3

And finally, this isn't mine, but kethinov actually updated his Later Midge Mallet.  Since I'm pretty much the only person to use Later Midge Mallet, I figured I should do the work.  The code changed from:
Code: [Select]
RAW 42 3400

Applies to vanilla, VWF, and Relocalized.

I know I changed a lot, but I'd appreciate it if you can update these.  Thank you so much.

Ok didn't know that (or forgot, it's been a long time). Thanks for explaining

I wouldn't mind that for NPC Evil Gate.
26

hmsong Hey there, it's been a long time indeed, hope you all have been foing fine

Was also thinking since we have spells like hellfire now, if that's applied, add to the npc Evil Gate a status infliction besides being just a different colored hellfire with the same function. Hp based damage + confuse or something.
27

A lot more endgame enemies should have dispel imo, as your magic levels are higher by that point so you would use buffs more often. I like the change you made for hexas and make use of the lunatic spell but I also think she should keep dispel as she gets countered by wall easily, being a heavy magic caster.

I think her other forms need to be more effevtive, should cast effective spells more agressively.

I like the changes you made on the wall/vampirr bosses, instead of freeze giving them wall. Would be fitting if the Chambers eyes would cast speed down, fitting the theme of being gnome elemental. But doubt it's possible giving another spell, it's fine if it stays the way it is now.

Hm, I'm not sure why the background color (the sky) failed to get color filtering applied. Here's a screenshot I just took at the same location: 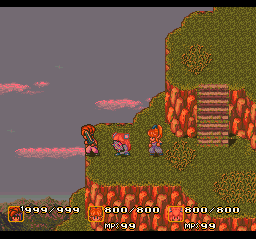 That's in Mesen-S; I also saw the expected results in ZSNES. Not sure yet if it's actually an emulator issue, just mentioning in case.

I've never really looked at the weapon experience logic, but that sounds like something I want to fix. If I recall correctly, the Mana Magic damage bonus does benefit from 8:99 (for the boy only, for obvious reasons), but that should be the only thing that cares about partial weapon experience.

And here's a preview of what I've been working on (for like 2 months): 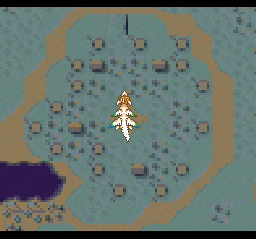 I tried again and the sky now looks completely normal, not sure what could have caused that. I use Snes9x.
29

Changes:
- Second preview of Miscellaneous\Enhanced_World_Map. The globe map view now scrolls pretty quickly. I think it feels nice now but would like feedback. It cost 256 KB of ROM space, which is a LOT, but probably worth it. Still can be improved further, but trying to push out playable iterations as I go. 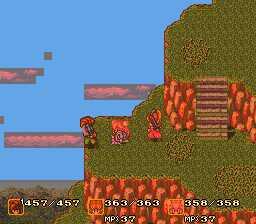 But that wont even matter atm, since reaching 8:99 is worthless, just mentioning it in case something gets done in the future about the 8:99 thing.
March 03, 2020, 06:27:06 am - (Auto Merged - Double Posts are not allowed before 7 days.)Hm actually I am able to level up the Griffin Claw beyond level 8:0 after reforged
30

I am truly glad that both of you haven't ditched SoM.  I know it's been quiet here recently, but I check this place everyday, always looking forward to the things you've been working on.  This is the most ambitious project in improving the game that I've ever seen (I hope neither of you are tired of making immprovements to this).  And I seriously enjoyed all the improvements, to the point that I feel that if this had been implemented in the original release, this would have been the most well known action rpg in the golden era.  Well, SoM was still extremely well known, but people had plenty of complaints due to many many problems.

I still love the game, that's why I follow this thread. It was one of the first super nintendo games I played as a kid.
31

« on: December 10, 2019, 01:06:52 am »
I don't have an issue with circular forging, by the end of the game I have enough money from the mana fortress anyway. You could also use the feature of Lunar Magic/Lunatic to transform some monsters into mimic to get equipment to sell, if you really are in need of money.

What I started to do in my recent playthrough after reaching level 8 or 8:99 weapons I forge some of them back. Especially how op poison is in this game I forge the Boomerang back to the Cobra Shuttle, and equip it as the 2nd weapon to the Hero, hit with the boomerang the enemies till he poisons them, then switch to the sword for pure damage. While forging the Axe back to level 8 so the Girl gets extra strength points.

There are also alternatives in form of sabers also, Light saber is very effective in mana fortress, I think it's nice to be forced to spend some mp to use it smartly, outside bosses also.

Magic recharge is actually really good Eids, in the original you rarely ever would attack with weapons, magic chain cast was just a broken feature in the game, it made the original game pathethically easy. It fixes at least that issue.
32

Queue weirdly enough that seems to be the case mainly for the Machine fight in the sunken continent and the mana beast fight but doesn't happen anywhere else, at least I wasn't able to track it elsewhere as I don't usually have her charge attacks.

Try one of those two fights

I actually managed to make this happen outside of those two fights. It doesn't always happen but sometimes I still get it. Set the Girl AI charge attack to level 4 at least, have her charge her attack and cast a spell as she charges her attack. She wont do anything and stops moving for some time as if she is trying to cast the spell but can't, you can't access magic either as if the spell is being casted.
38

« on: December 02, 2019, 05:30:50 pm »
Queue weirdly enough that seems to be the case mainly for the Machine fight in the sunken continent and the mana beast fight but doesn't happen anywhere else, at least I wasn't able to track it elsewhere as I don't usually have her charge attacks.

Try one of those two fights
39

I experienced a weird glitch with this revision. I tried a combination of patches and the resulting ROM was corrupted. Tried it again and no issues. Did anyone else have a similar experience or was this a one-off?