Newcomer's Board / Re: Can't log-in to Data Crystal. How else can I contribute?

Newcomer's Board / Re: Can't log-in to Data Crystal. How else can I contribute?

Newcomer's Board / Re: How to Learn how to use a PSX debugger?

Totally agree with what Fast6191 said, Just search the savestate for the data you wanna work with and then corrupt the data in memory. You can learn a lot by seeing how the game breaks by changing values.
4

Newcomer's Board / Re: How to get Vagrant Story\'s speech bubble font?

« on: June 06, 2019, 03:28:46 pm »
Its great to see someone using these tools. You are gonna love making cutscenes. The only real limitation is that you have to use the animations that are already available in the game.

PRG (Program) files are executable programs. They mostly contain software but also contain data. These files can be converted to a human readable form using a MIPS disassembler. You wont get much benefit from reading that unless you have knowledge of programming and a lot of patience. The original developer has complete freedom in how data and software are arranged. Generally the disassembler makes no attempt to separate data from the software, so a human must decide which is which.

I'm looking at the font in video memory right now. I'm trying to trace it back to where it came from on the disc. I can lift out the font for you.

There are many fonts in this file. This font appears to be a portion of a larger image containing other fonts. There is another 12x12 font immediately before this dialog font and it is also 12x12. And there is a tiny 8x8 font running vertically along one edge of the entire image, which makes use of the fact that 21 characters leaves 4 bytes (8 pixels).

The entire image is blitted to video memory in a single copy operation. The full image begins at offset 0x1ABF0 but it does not appear to have a file header. I have no idea how tall it is, only that it is at least 256x192 and not larger than 256x256. I have not found the CLUT (Color Look Up Table), so the font does not have correct colors. There appear to be many CLUT's each containing 16 colours (4-bit) but I have not found the right one.

Newcomer's Board / Re: How to get Vagrant Story's speech bubble font?

Programming / Re: Can someone help me get DevkitPRO/ARM to compile a GBA sample?

If you are on Windows you first need to get a Linux machine setup. Best to get virtalbox and install Ubuntu

Once Ubuntu is set up do the following

Programming / Re: Can someone help me get DevkitPRO/ARM to compile a GBA sample?


What's your makefile look like? I'm not a make guru, but I know the basics. I can take a look for you.
8

One last thing: about that counter, is it possible to set other conditions like "when T > 3s, proceed"? I was just thinking it might feel better with a small pause there, before the loot phase comes in.

« on: April 08, 2019, 02:33:40 pm »
Excellent work, this is extremely elite stuff your doing. And now for the cherry on top, here's the audio fix mixed in with your changes above. Looks like 0x00045988 is the play sound effect function. Most of them we wanna keep but need to get rid of two of them (start up sample and a looping sample)

Not bad work at all, very polished

That break point is a leftover from previous attempt and is not important.

That's kind of all you need to know. The hack would go something like this.


Now there is still a visual for "PRESS BUTTON" (entering from stage right), I have no time but you may be able to track it down by removing the jal functions or by adjusting a different count down timer (sltui r2, ...)


1. Fire up Vagrant Story in pSX

2. Get a roulette wheel on screen

6. Step through the drawing process until it starts drawing the Roulette 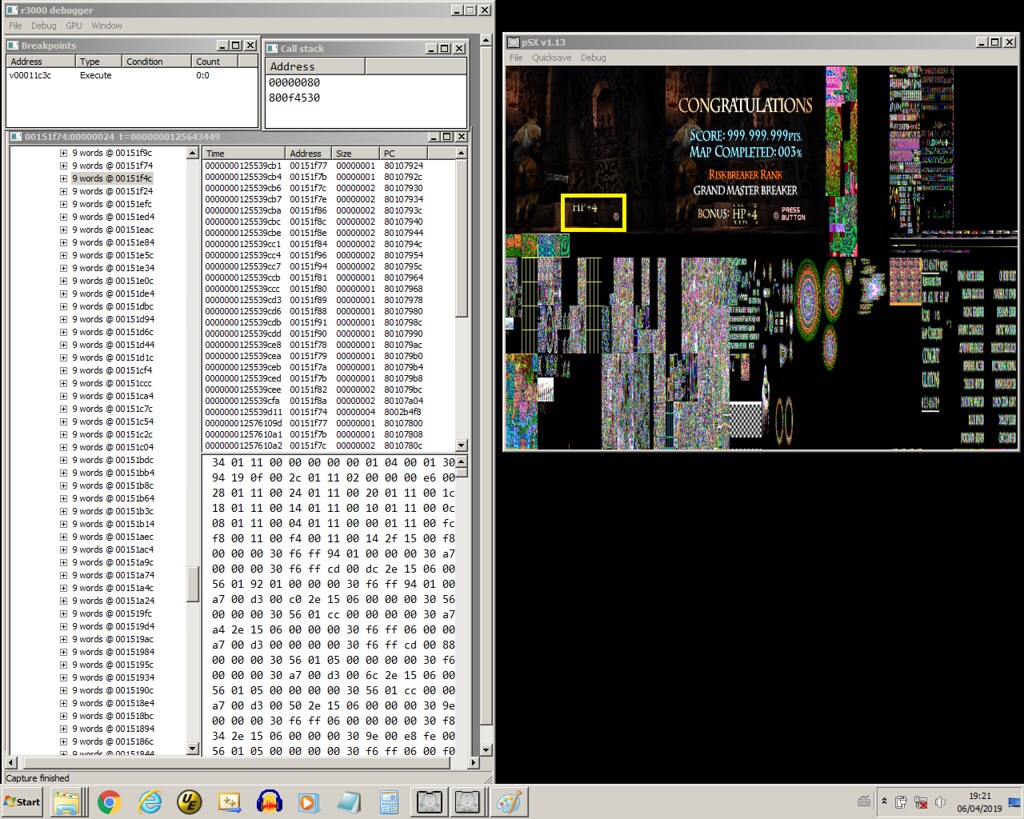 7. This image is interesting, take note of the Program Counter (PC) 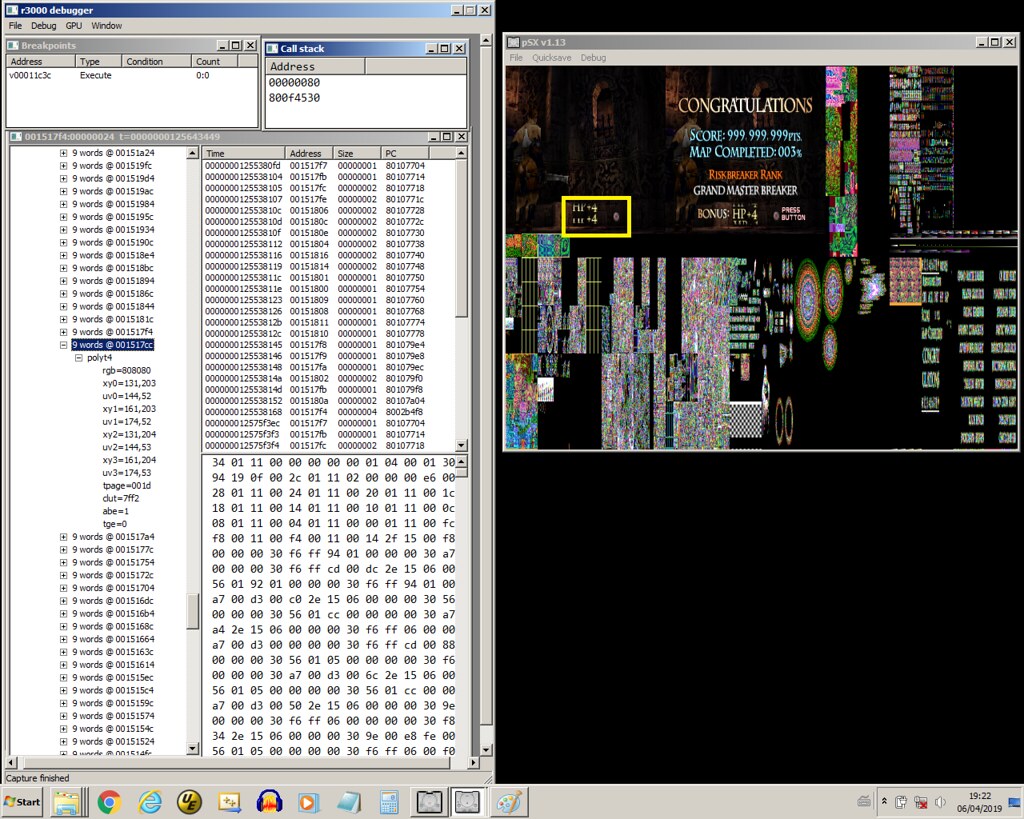 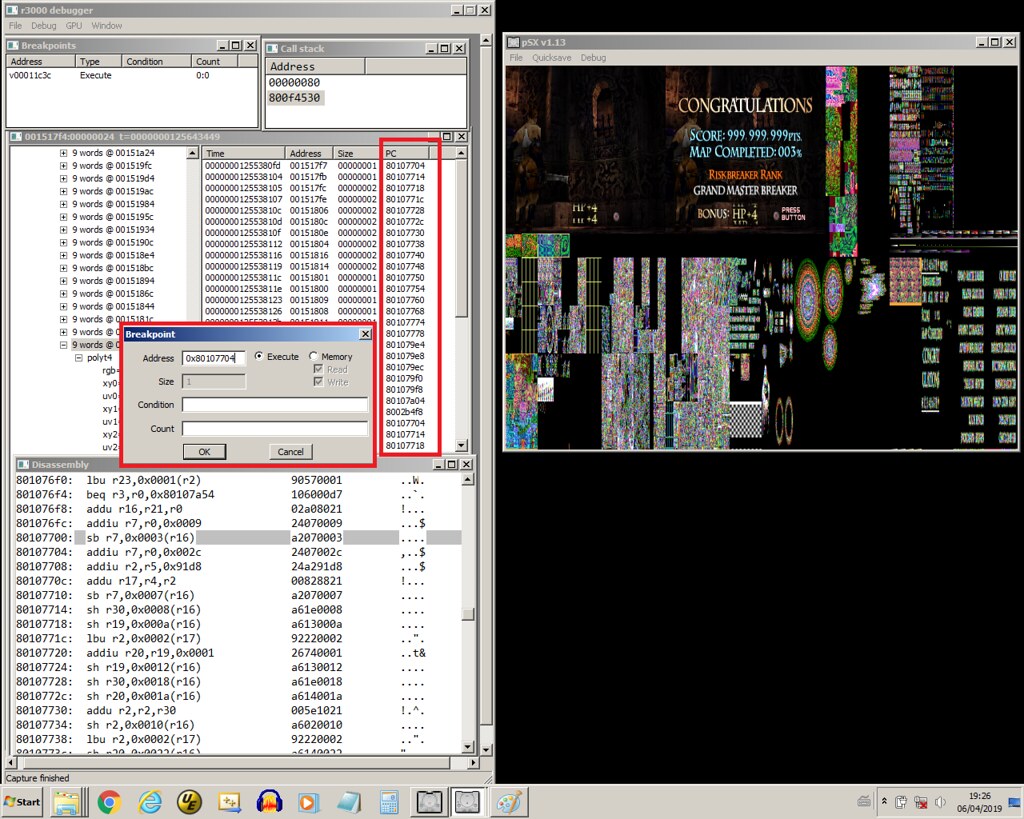 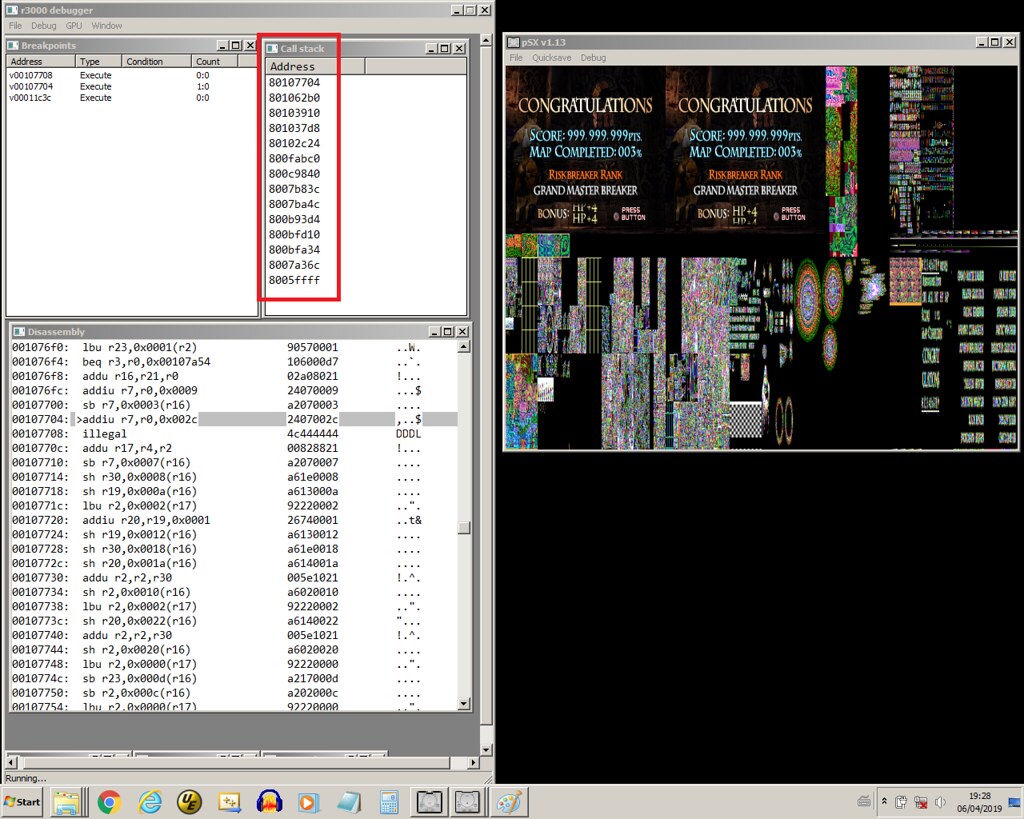 10. This one looks promising 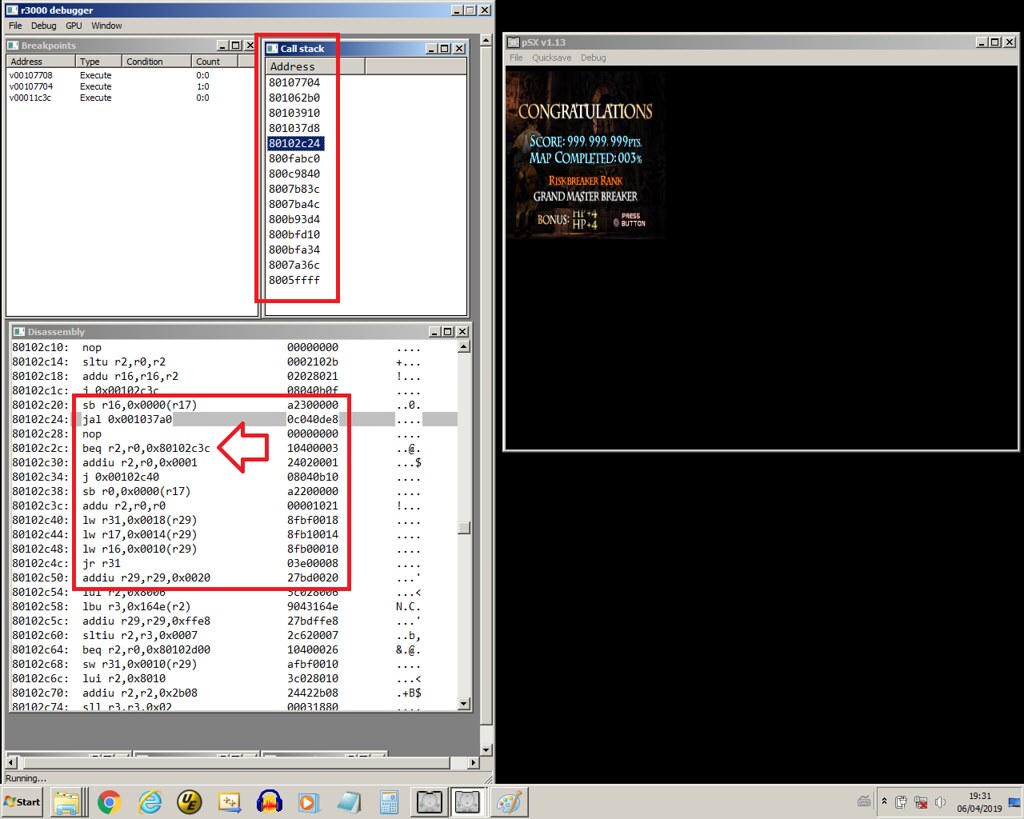 11. Get rid of that conditional branch and test (debug -> run) 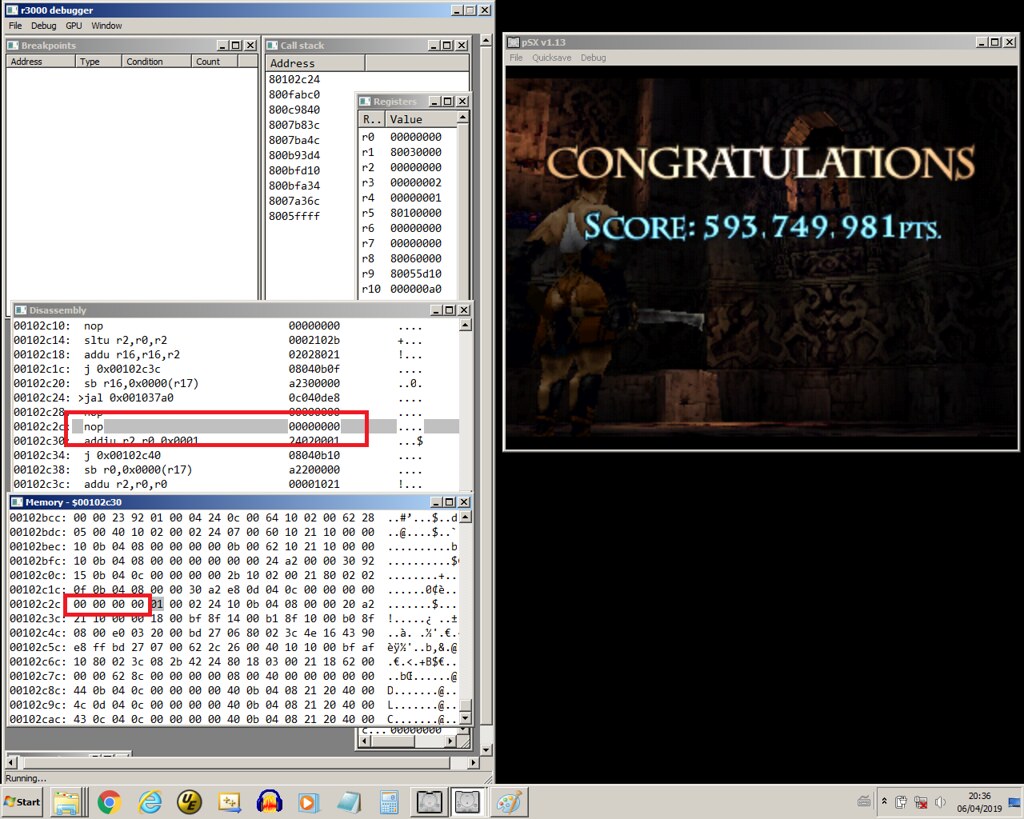 12. Okay found it, now let's open a Hex Editor and search for that instruction sequence 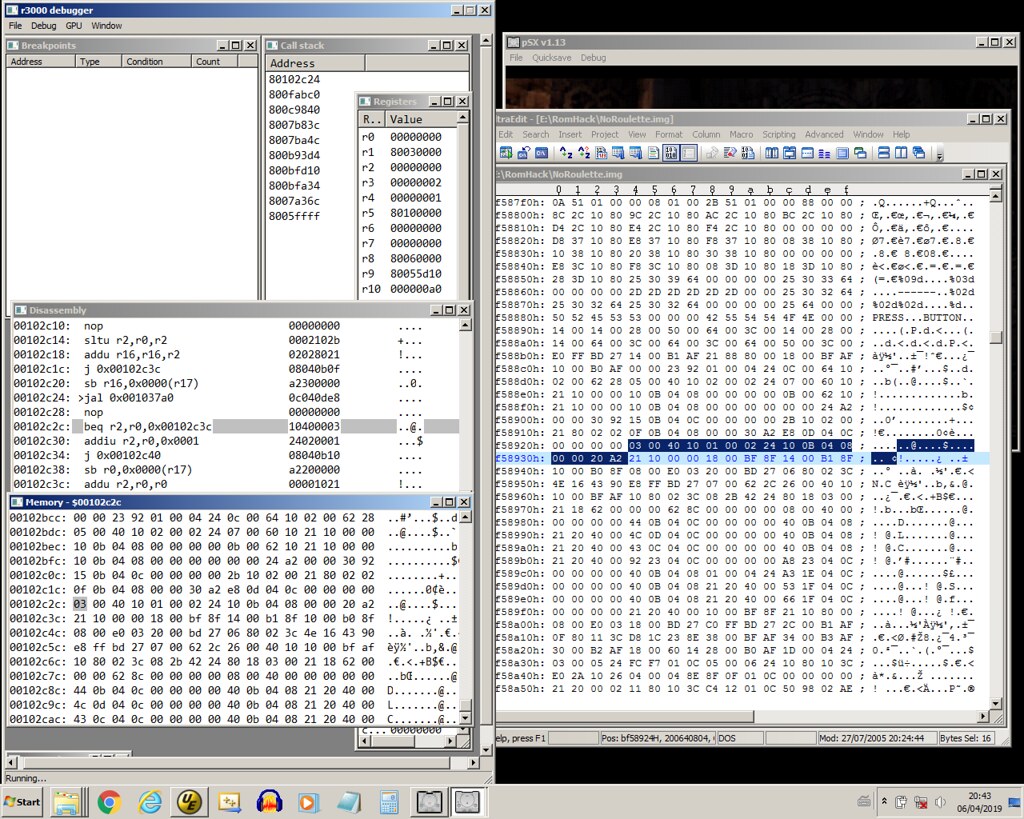 13. Apply the patch and save 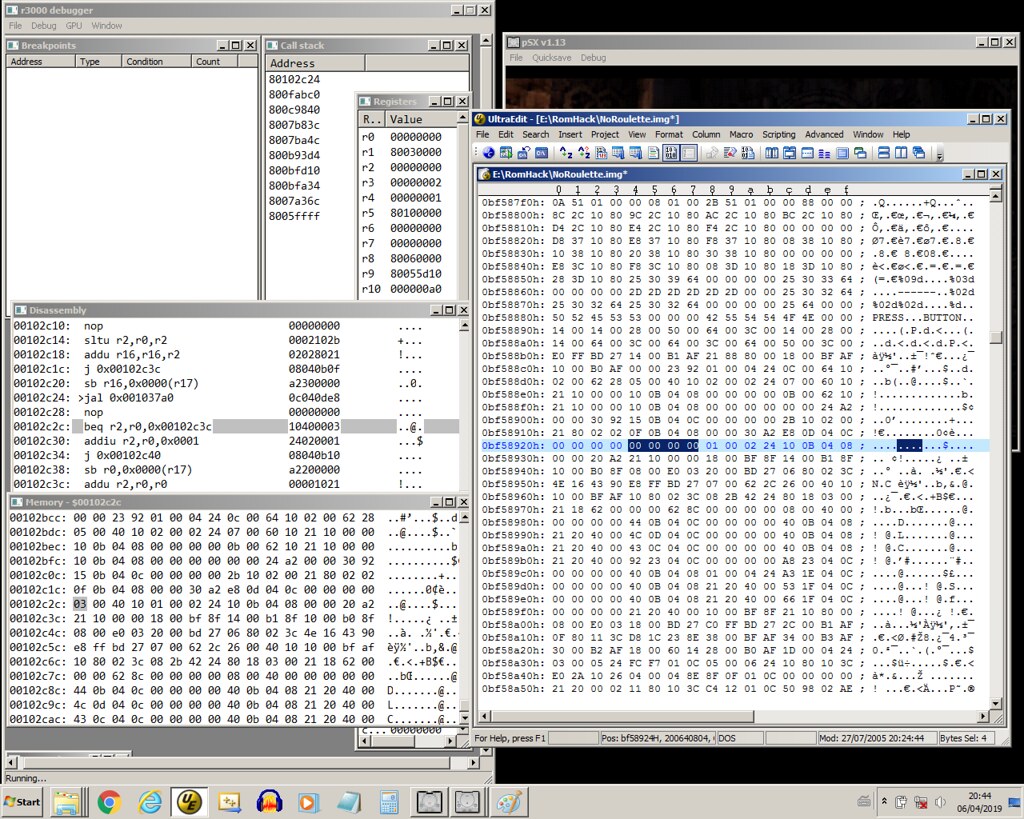 Now that you know the basic process you can do similar things in future. You don't really need to understand everything that you see. Think of the branches as a sort of flow chart diagram, and blocks of code are only stitched together by the branches.

Newcomer's Board / Re: I need help finding a ROM hacking tool...

« on: August 21, 2018, 03:06:35 am »
Sorry if I came off as rude. I don't doubt your ability or appetite. But there are no tools for what you want to do and thats a big blocker. Before investing the time in that, it may be worthwhile learning on a game that already has this support. It will pay off in the long run
15

Newcomer's Board / Re: I need help finding a ROM hacking tool...

If there are no tools then you need to make them, or you will need to apply generic tools and some simple scripts.
16

Programming / Re: How to use syscall/ disc read in psx assembly?

« on: August 10, 2018, 04:10:38 pm »
You may have better luck tracking the data tables that store the LBA of the file data. That way your files will be treated just like the normal files. You can find these tables by placing breakpoints on CDROM DMA, then back trace the stack to find the original call point.

If this is not possible then you need to read the manual. This documentation is a great place to start:
https://problemkaputt.de/psx-spx.htm#kernelbios

A(A5h) - CdReadSector(count,sector,buffer)
Reads <count> sectors, starting at <sector>, and writes data to <buffer>. The read is done in mode=80h (double speed, 800h-bytes per sector). The function waits until all sectors are transferred, and does then return the number of sectors (ie. count), or -1 in case of error.

A(A6h) - CdGetStatus()
Retrieves the cdrom status via CdAsyncGetStatus(dst) (see there for details; especially for cautions on door-open flag). The function waits until the event indicates completion, and does then return the status byte (or -1 in case of error).

ROM Hacking Discussion / Re: [PSX] How to find a graphic in memory?

« on: July 16, 2018, 02:22:33 pm »
Texture and sprite data must be DMA transferred to VRAM. Polygons must be drawn. The pSX emulator has a debug menu which allows you to debug gpu commands. You can capture a number of frames and it will allow you to step through the rendering of each frame one polygon at a time. For each polygon you can see which function issued the draw command.
18

ROM Hacking Discussion / Re: Determining what a segment of code does?

These values you're looking for, do you know roughly where the data lives? If you have some idea then corrupting that region of data will help narrow it down. This is much faster than walking through code.

Or do you know the function in which it should be accessed? Only thing to do here is set a break point at the function entry point, when that triggers the debugger will break. Take this opportunity to make a save state so you can rewind the clock. Nop out instructions and step through over and over again, that's all you can really do here.

ROM Hacking Discussion / Re: Determining what a segment of code does?

« on: May 27, 2018, 04:16:55 am »
Static analysis (reading the code) is difficult, it is better to use a debugger. The debugger will allow you to watch the code execute in slow motion so you can observe how the data flows through the registers. A debugger does this by allowing you to step through the code one instruction at a time and will pause until you manually step forward. Break points can save time. If you place a read/write break point on data, then the debugger will run like a normal emulator but will stop when the game reads or writes that data. You can also place execute break points on instructions.

« on: May 01, 2018, 09:36:04 am »
Im not sure i fully understand the problem. But i can clarify at least one area of confusion. You are changing bytes and this effects the disassembly. There are two possible causes
1) the bytes are program instructions and by changing those bytes you are corrupting the program.
2) the bytes are data and just so happen to map to well formed instructions. This is possible and requires you to use reasoning to determine it is data.

Are there invalid instructions mixed in to this area of the program? If so then most likely it is data and the dissasembly has no meaningful information.
Otherwise the changes to the disassembly are purely because you changed the bytes. In this case you can assume that those bytes are part of the program and the data is elsewhere
Pages: [1] 2