Have you thought about adding other things...

The only character I haven't pixeled and shown yet is a nagging wife. Other than that, and a few items, I just have to finish the frames of animation for the existing sprites and knock out the four backgrounds.

The goal is that for a complete beginner, after a couple of trial-and-error attempts at moving pieces and being denied by the computer, that these pieces would become self-explanatory--removing piece memorization from the  initial learner's curve.

If anyone actually plays Shogi, please drop some feedback on this.  I own a couple of sets, but have never gotten around to playing it.

...there was nothing to set the King apart from the rest, I've put together these.  I'm leaning towards number 4.

Previously, I had thought the four lower ranks all upgraded to the Gold General. However, after reading more, they more promote to new pieces that move the same as the Gold General. With my previous designs, there would have been no distinction between these pieces, which is necessary because if you capture one it reverts to its unpromoted status.

So, I've changed the designs to use the same abbreviations as those used in English notation of the game, and altered the graphic movement for each to accommodate. 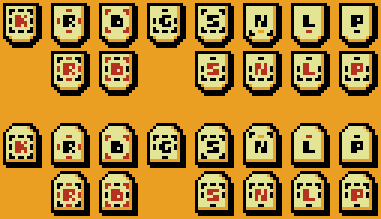 As is shown, I've opted to keep the letters right-side-up, even when on the opposing team, for ease of reading. Considering the small chance of it being played in a cocktail cabinet... it should be fine.

Also, the game originally showed a small graphic of a man playing against a robot. (Sadly, I don't think there's a two-player mode.) 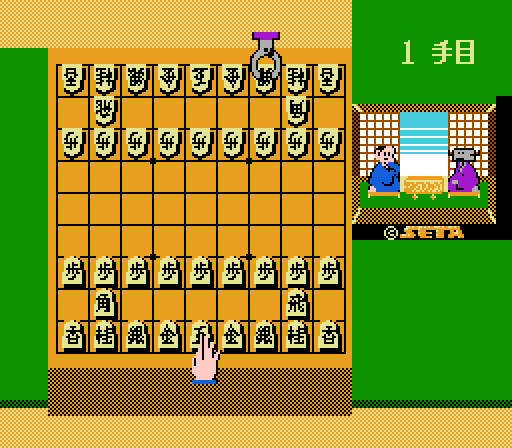 Following are my sprites for the man, the robot, and each one's cursor for selecting pieces:

Also, ran into a problem with the palette attributes for the background. Putting this on old for a a few weeks while I work on some other stuff.
443

sounds like a dumb idea, but someone could REALLY get around to translating Sugoroku, Go and Shogi games for GB, GBC, NES, GBA and SNES. Not only just translating, of course, but also changing pieces visually sometimes to make it easier to understand what is what.

Thanks for the suggestion. I'll be tackling Naitou Kudan Shogi Hiden, 1985 for the Famicom. I've designed new pieces that should explain piece movement without the need of external documentation or knowledge. Check the thread here.
445

sounds like a dumb idea, but someone could REALLY get around to translating Sugoroku, Go and Shogi games for GB, GBC, NES, GBA and SNES. Not only just translating, of course, but also changing pieces visually sometimes to make it easier to understand what is what.

The above suggestion popped up in the Hack Ideas thread, and where translating doesn't interest me, modifying an NES Shogi to make it very beginner-friendly does. I'll be modifying a 1985 famicom title, and plan to stick to my goals of near 100% complete custom art.

The goal is that for a complete beginner, after a couple of trial-and-error attempts at moving pieces and being denied by the computer, that these pieces would become self-explanatory--removing piece memorization from the  initial learner's curve.

Black represents single-space movement, Red-continual movement, and Orange denotes initial position (with the exception of the Knight, on which an additional orange square shows the skipped or jumped space.)

If anyone actually plays Shogi, please drop some feedback on this.  I own a couple of sets, but have never gotten around to playing it.

Realizing there was nothing to set the King apart from the rest, I've put together these.  I'm leaning towards number 4, different in that his starting position is red and the movement still reads clearly. However, there's appeal to #1, although I don't like not displaying the movement on the tile.
446

Boss fight for Area 1 is up.

Redesigned this boss a ways back. Optomon was awesome enough to re-code the boss to accommodate the new design. Below is the design process. It looks great in-game. That'll be shown soon.

Until then, the process:
Spoiler: 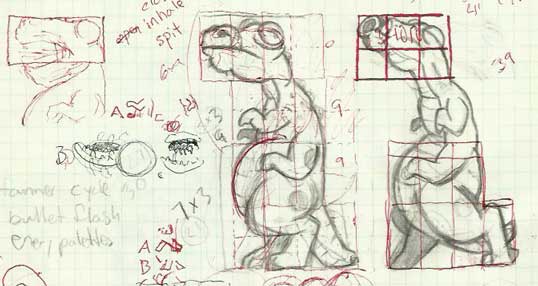 Temporary art given for coding purposes. 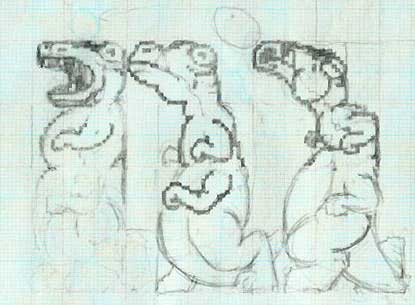 Some partially pixeled-on-paper sketches.
and the design:

EDIT: let it be known, I'm not interested in translating any text-heavy one, but if I find one with a simple and straight layout, I wouldn't mind doing some "beginner" icons on the pieces.
450

« on: April 04, 2013, 04:55:21 am »
Palette is a snap. Quicker and easier than graphics actually. Don't think simply like "greening"it up. The original contained very little red actually. Think more of how the colors relate.
451

« on: April 03, 2013, 10:16:25 am »
Maybe think about some palette changes. Nothing drastic and wacky, but for instance Mario's pills, title screen logo, and viruses are all primary colors set against secondary color backdrops. Perhaps Luigi's would all be secondary colors set against primary color backdrops. IMO, a little something to make it feel more like his own game and not him in Mario's game.
452

And you're the number one fan I could ask for. The aesthetics standpoint from your romhacks are top-notch. 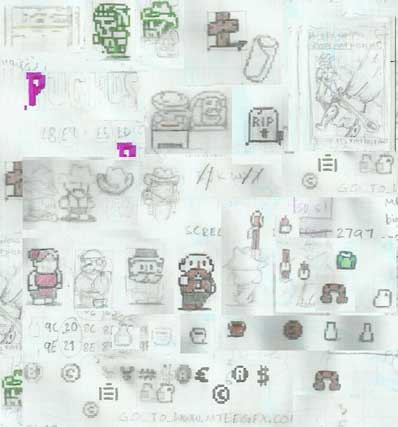 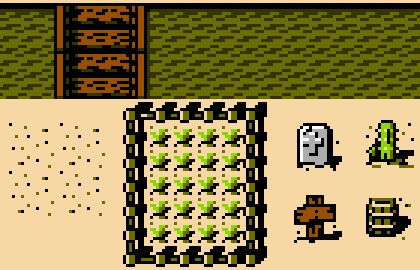 Some doodles out of the sketchbook and some background tiles. Removing black from the dirt tiles and simplifying the fence. The game looked very distracting with it in there. 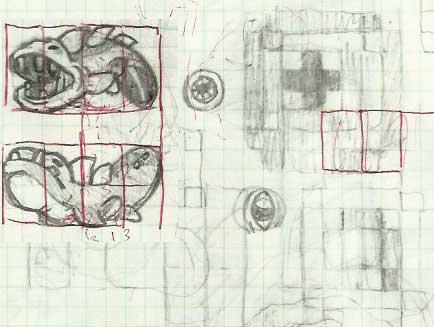 The redesign of the following enemy:

Not all of the stuff I uploaded is making it into the game, and there's a lot of minor sprite changes and updates and whatnot, so I didn't want to bog down the thread with them. But, check em out if you'd like.
454

I hate to open this can of worms, though I like to think we're mature enough around here to discuss this, but since the thread title mentions feminism, this video did come out about a week back: http://www.youtube.com/watch?v=X6p5AZp7r_Q

Thanks for posting this. I was previously unaware of this series, and  fully support the breaking of such stereotypes.
455

The big turtle shells have an awkward seam a few pixels up from the bottom, but more importantly, they're drastically larger than they are when a turtle is actually in them.

The goombas and backgrounds look good, but the dithering feels like too much in some places.

Thwomp has a very good face, but the jagged bottom looks weak, like an afterthought in terms of design.

The fortress is darker than I found comfortable (at least on the crappy palette that NESdroid uses).

Only played up to the first fortress so far, but I like it. I would like to see more graphics work done from scratch and less edits though.
456

« on: March 29, 2013, 06:43:28 am »
This is an idea dumping ground. Think of it as a collective brainstorming session. It is not viewed as a place for requests. Just a public place for ideas. Maybe someone sees your idea, considers it worthwhile and plausible and go through with it. Usually not. I, myself, look through for inspiration, but most of the game-specific ideas don't interest me. Can't speak for others.

« on: March 28, 2013, 11:40:52 pm »
Agreed that this conversation is for much further down the road. My priority now is making this look the best it can, and staying satisified with the fact that it can be burned to cart, slapped into a deck and enjoyed.

I think everyone will be pleased with the next progress shown. The last version of the rom I've seen looks killer.
458

« on: March 27, 2013, 08:44:25 pm »
We actually talked about the possibility of moving over to a PC Game engine such as Pygame, GameMaker, or Scirra for a PC port after completion. I know there's some improvements I'd love to make that just can't be done with our space limitations, flashes on the character sprite when firing, larger versions of bosses, more variety in level backgrounds, Ninja Gaiden-style cutscenes, etc, while still maintaining NES resolution and palette.